Hank Hudson was happy to unravel the mystery of his double identity, along with the juxtaposition of his established dots and his materializing watercolors.
PHOTOGRAPHS BY HENRY CONNELL

“I’ve got Gemini rising,” says the artist formerly known as Hank Hudson. “It’s wired into my public persona to have a dual nature.” A graphic designer, photographer, and painter, Henry Connell is an award-winning art director who developed the look for Andy Warhol’s Interview magazine, as well as Cosmopolitan and Glamour magazines. Around town he’s known for depicting the faces of iconic personalities in grids of colored dots in digital art available at Woodman Shimko Galleries in Palm Springs. Earlier this year, he began painting large, abstract watercolors.

Henry Connell didn’t always answer to Hank, his artist handle. But he was happy to unravel the mystery of his double identity, along with the juxtaposition of his established dots and his materializing watercolors.

“One of the side effects of the pandemic was that I had to move back into my house, which had been a rental. The silver lining was that I have a studio there, so I could let loose and work big and sloppy in a 110-degree garage. The process is new to me. It came about because of a) a big blank wall in my living room and b) a book called Art Today from 1974. I had wanted to do some large-ish painting on unprimed canvas for a long time. Now, I have the space and time to get busy.”

IS IT HANK OR HENRY?

“I use ‘Hank Hudson’ as my artist name. When the magazine world in New York imploded 12 years ago, I set up my own shop and knew I was going to need a name that was memorable, spellable, and searchable. I can’t tell you how many people I worked with for years thought my name was Henry O’Connell. So, Hudson sounded good. Once people think that’s your name, it’s easier to let it ride than explain. When I moved to California, people I met introduced me as Hank Hudson, and it stuck. In the beginning, I didn’t think through the complications it would cause. But changing your name is actually very freeing.” 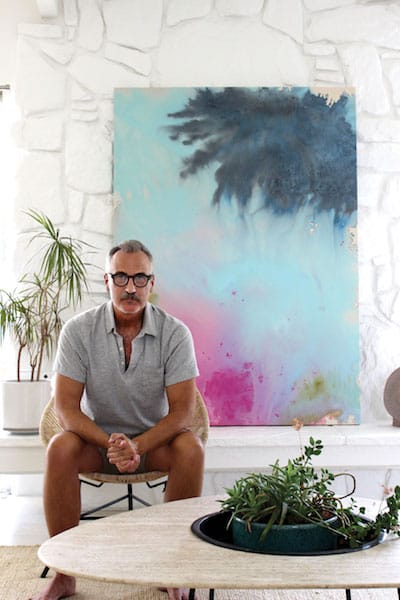 “The Dot Series is a culmination of my interest (obsession?) with media representations of glamour, celebrity, and beauty. In my other life as a [magazine] art director, I had to color-correct images for printing. We looked at the proofs through a magnifying loupe and looked at the dots: CMYK — cyan, magenta, yellow, and black. I always thought it was fascinating how abstract it was looking at the magnified dots. For the portraits, sometimes there is just one reference image, but usually it’s a combination of multiple images. I generally work in both Photoshop and InDesign, sometimes also Illustrator. There is always trial and error. It’s fun to see how far I can abstract — how big I can make the dots — and still evoke some of the person’s qualities and character. I have to have some distance. I look at a work in progress on the computer from another room and squint.” 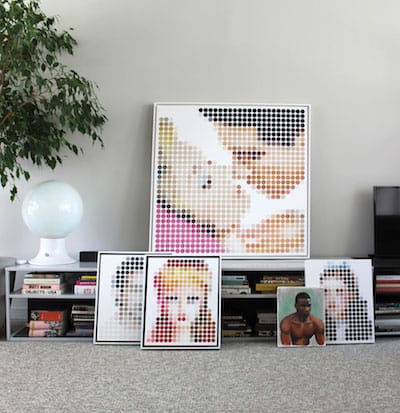 CAN THE DOTS
& WATERCOLORS COEXIST?

“Oh, sure, on different days. The watercolors need an extended period of time to work. You have to keep the canvas wet and strike while the fabric is accepting and when the light is good. I can work on the Dots, which are on the computer, anytime of day.” 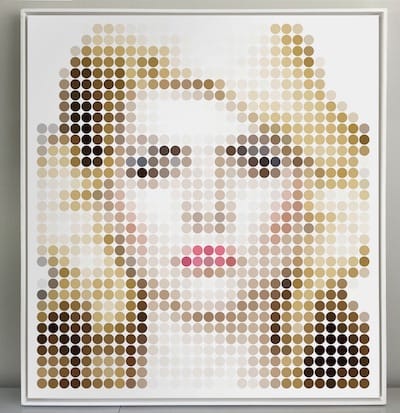 • READ NEXT: The Mural of the Story is a Playfully Painted Pool.