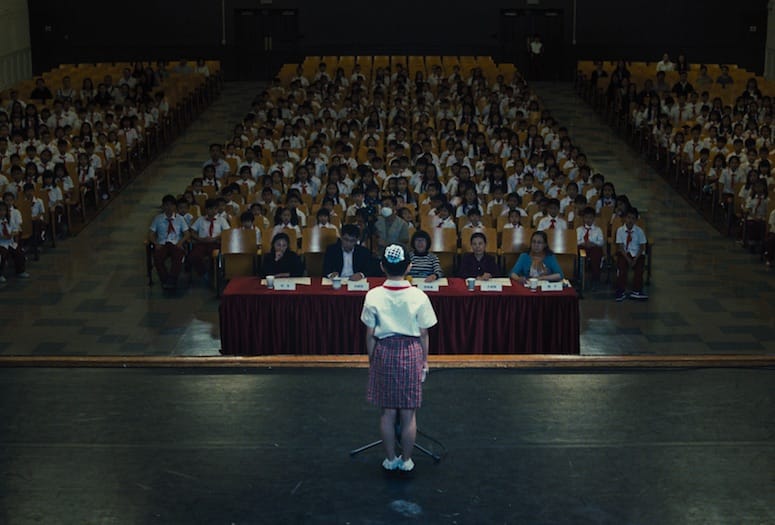 In the film, actor Harmonie He must make a speech in front of her classmates - a scenario taken directly from the director’s own childhood experiences.
PHOTOGRAPHS COURTESY "THE SPEECH"

Initially, the principal told Haohao Yan and her fellow students that they would need to stay at their boarding school in Beijing, China, for the weekend.

Then it was extended to a week. Then a month. Eventually, they would spend three months in lockdown because of the SARS virus, which first infected people in a southern province of China in 2002 and by 2003 had spread to 26 countries resulting in more than 8,000 cases. The experience left an indelible mark on Yan, who took that memory and developed it into a short film, The Speech, now making its premiere screening virtually at the Palm Springs International ShortFest. The film focuses on three girls (Yan and two of her friends in real life) just being kids, but also realizing there was more to their world than just the brick and mortar school.

“It was a very vivid memory for me, just that sense of not knowing when this would end and not knowing how the world is going to be when this all ends,” says Yan, who made the film as part of her thesis at the American Film Institute Conservatory. “I think that world stuck with me. And this film, from the beginning, it was completely a coming of age story about these girls and their daily adventures, and how they reach moments of realization about their own decisions about who they want to be, and also what does it mean to be individual in this world.”

Yan could have never known when she began shooting the film in May of 2019 in Los Angeles that having the SARS virus as the backdrop would appear eerily similar to conditions the world has been experiencing in 2020 with the outbreak of the coronavirus. “(Having SARS as a backdrop) provided me an opportunity to see the real world, because normally, the teachers are always right or the parents know everything, but when SARS happened, nobody knew.” she says. “And as a kid, I think that was the moment I started to pay attention to the world and to what’s happening, and also to have my own understanding of what’s happening out there.”

The Speech will stream through June 22 on the Palm Springs ShortFest website, and the 25-minute film is among the contenders for Best of the Festival Award and Best Student U.S. Short. ShortFest will announce the winners via its social media channels on June 21. To view the film, click HERE.

Yan spoke more to Palm Springs Life about creating this film featuring many kids with no acting background, the challenges of using seven locations in Los Angeles to create the feeling of one school, and how she has found her footing as a director.

Did you find it difficult to tell a story you were personally connected to or was that an advantage?

Writing a very personal story with yourself as the main character is very, very difficult. And then, through the development, I started to recall memories of my friends, because I grew up in a boarding school in China and most of my time I spent with my friends and my classmates. I didn’t really get to spend a lot of time with my parents compared to the kids my own age. And I just so vividly remember their experiences. 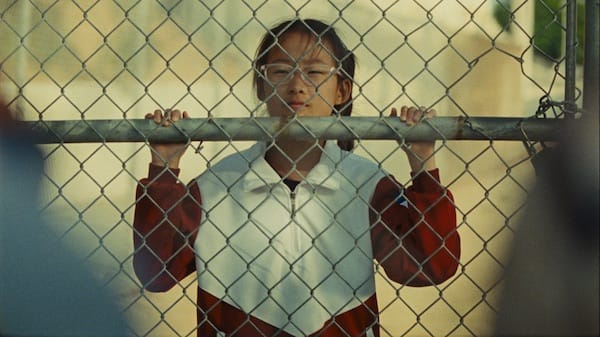 A student peers from behind a fence at her parents, who are masked and at a distance.

That’s how one person’s story became three girls’ story. The first two girls are based on my friends’ experience, my very close friends. I still have contact with them. And even the names are a direct reference. I just used their nicknames. So, in a way, I want to show that this is the collective memory, because that’s how I grew up. That’s how I’m always inside. You have one kid inside a bunch of kids. So, I experienced what they experienced, and I think whatever they experienced also stuck with me. And I’m really happy that, in that way, they helped me. These two other characters helped me to make the world fuller, but also there for me to be able to, in another perspective, to develop the story.

You shot the movie using seven different locations in LA?

Yeah, because I really, really wanted these wide shots. I don’t want everything to be up close and just the character, because the world around them is so important. This architecture and everything has to be, not only believable, but also for the atmosphere, it has to be correct. One of the locations was a run-down hospital that nobody had been using anymore, and we used it for the dorm for the kids. I’m very happy that we were able to persuade the school and also the whole production that this is to worth it. And I think, at the end, even it’s just a corner or a staircase, I think very subtly it all adds up.

What was it like working with children? They seemed very natural in front of the camera in your film.

Children, when they get together, it’s miserable, but I love them, because I love that they can’t fake it. Once you become their friend, you make them let down their guard, it’s easier for them to forget the existence of the camera, I think, than most adults. And also, I worked with mostly non-actor kids, so they have no experience before this production. 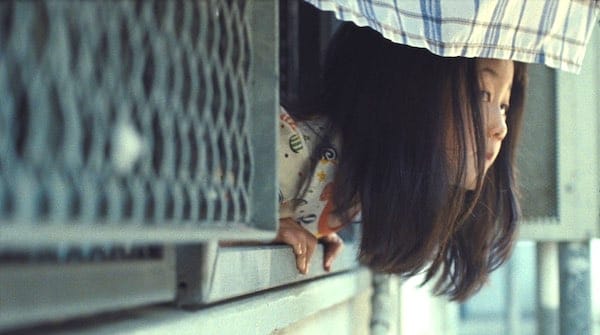 They don’t know what it means that their face is going to be shown on a big screen. They just can’t imagine that, so they’re just being themselves. But I really loved it, because in a way, a lot of the energy and the relationship came from the actors, not from the script. I was very lucky that we had a long period of pre-production. I really got into the community and found whoever I could find, and brought these people together. Before the movie started shooting, we had already rehearsed a couple of times.

Did you know SARS was a real thing, or being locked in at the school made you forget what was going on un the world?

I think it was, thinking back, it was definitely a more dramatic experience to the adults than to us, because for kids, it’s totally happy to be all day, every day with their friends. At that time, the teachers are not so strict on the homework and your study anymore, and we also spent our weekends in school, so it’s like children have it. It’s just gone wild. But we all know that something is happening, because we see the news. And we all know when the teachers are watching the news, the teachers are so nervous that it reveals another side of the adults that we had never seen. That, I think, was the most frightening for me as a kid, because I always believed that they know the answer to everything. And then, that was the moment I realized my parents are so fragile, and my teachers, they don’t have an answer for what’s going on in the outside world.

How did that experience shape you for what we’re dealing with now with the coronavirus?

I’m an adult now, so I can handle it and cope with it, I think in a different way. But as a kid, it was a bizarre and also just a very, very dramatic experience, but not in a way that someone will die tomorrow, in a way that you don’t know what the world is anymore. I think SARS definitely did affect me and my whole generation of Chinese or Asian kids who grew up in this experience that we know this is serious. This will take away our family or our friends’ lives, so we have to take every precaution seriously.

You moved to this country when you turned 18 and enrolled at UCLA. Did you know then you wanted to be a director?

I studied producing at UCLA in the mindset of thinking that I can get a nice job in a nice office, wearing high heels every day and read scripts. And that didn’t work, so I changed my career path to be a writer/director, because I just can’t babysitting projects of people that I don’t see the values of. I’m a bit arrogant when I was younger. 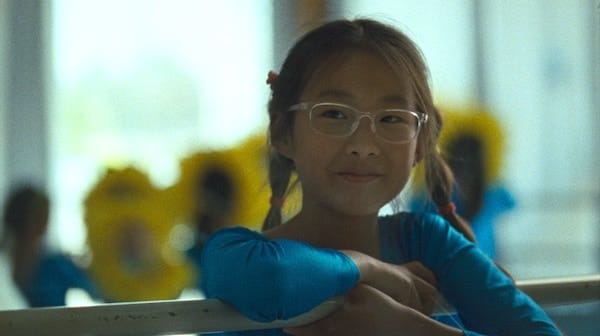 But it helped me to find my own passion, and then I applied to AFI, because everybody in town was telling me that, if you want to be a director, this is the school you should go to. And very luckily, I got in on my first try, and I learned everything here with my classmates. More than the teachers, I think I learned from my classmates, because it’s a very international program. I think 60 percent of us are not from America. It’s also so interesting to learn their culture and the way they make films in their countries. And I think China makes some very good films, even here as well, so I think that was very, very helpful as a filmmaker. This is my passion and I’m eager to make films.