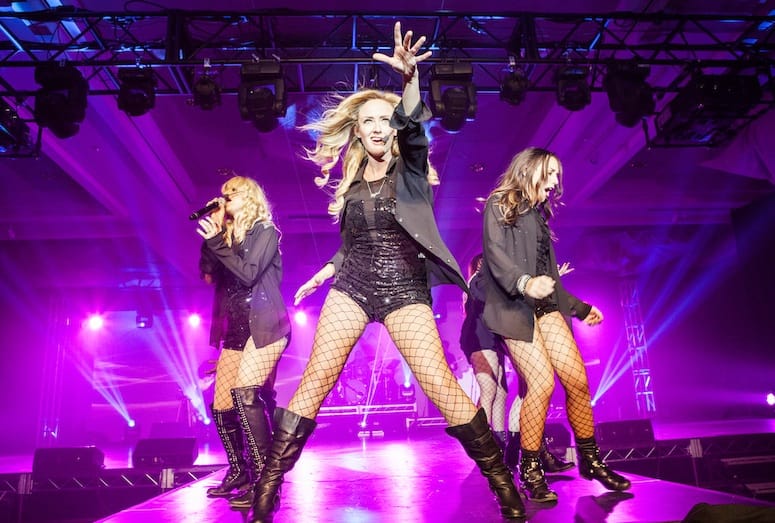 There is never a dull moment for Dani Armstrong.

Her role in the upcoming Top Rock production set to premiere Aug. 1 at the Hard Rock Hotel Palm Springs requires the kind of quick-change artistry often reserved for caped crusaders.

“Top Rock is one my favorite shows that I’ve done in a long time because one minute, I’m in a dress singing Natural Woman, and then next I’m in leather and chains, dancing my heart out to Prince’s, Let’s Go Crazy,” Armstrong says. “I’m also a pole dance instructor, so we added fabulous tricks to engage the audience.”

Top Rock returns for a new season after making its initial splash last year. The six-week run brings a new cast, new songs, and stage effects. Opening night will begin with a two-hour reception before the show followed by a cocktail reception and cast meet and greet after the debut performance. According to creative director Trini Garza of Troupe Productions, which produces the show, Top Rock is “a classic rock concert concept. Kind of like Rock of Ages without the storyline. The cast does not try to impersonate, but pay tribute by performing some of the greatest rock sounds with fantastic choreography, a five-piece live band, Broadway and Las Vegas style lighting, state of the art sound and costuming.”

Audience members should expect to gain an “in your face” feel from the performance, according to Brandon Alameda, co-creative director as well as a member of the cast.

“We are making the show more interactive,” he says. “There will be four satellite stages placed throughout the house, stripper poles, and cast performing from within and around the audience for a 3D-effect.” The producers also have added famed Broadway choreographer Ray Garcia (you may have seen him in Desperate Housewives, Rent, and Neverland) to the team.

Armstrong believes the show is tailor-made to her talents.

“Top Rock, in general, is one of the highlights for me in my career,” says Armstrong, who is also working on her first album. “I’m a rocker chic at heart and in my own head, this show has been created just for me. It’s sexy, edgy, and hot. One moment you’re clapping with Rolling Stones music and the next singing the Eagles’ Hotel California.”

Top Rock also has become a family affair for Armstrong. Her fiancé, Kevin Kapler, a drummer on tour with Crazy Town (of Butterfly fame) is also a part-time drummer for Top Rock. He proposed to her in the middle of a show.

“He was playing drums in the middle of the last number and jumped over the drums,” Armstrong says. “Everyone in the cast and production knew about this but me, and he proposed right on stage. It was definitely the best night of my life.”

Armstrong encourages everyone to come out this year to join the fun.

“It’s an energetic experience that gets your heart going,” she says. “When you leave, you’ll want to play Van Halen in the car on the way home.”