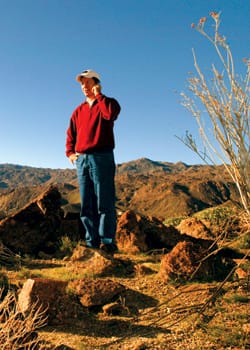 If “environmentally sound” and golf club development seem incongruous, you need only look at Palm Desert’s Stone Eagle Golf Club to see how the two ideas can blend harmoniously. Tucked between the imposing granite walls of the Santa Rosa & San Jacinto Mountains National Monument and stretching west into open desert and the Cahuilla foothills, course designer Tom Doak found a golden opportunity: Not a single home — nor any other structure — would border the course.

For Doak, whose Pacific Dunes course in Oregon is widely considered a modern classic, the space presented rare challenges — from the forbidding land itself to the sheer quantity of beneath-ground rock.

“This was the most challenging site I’d ever worked on,” Doak says. “It’s very steep, and there was a lot of elevation change to be taken up. We were trying to build a traditional golf course that you could walk; and, from a practical standpoint, we had to get up and down the hills there quite a bit.”

The result is a European-style course with undulations throughout the fairways, sharp drops, and desert hazards (think blind ravines that eat your pars) throughout. “The nice thing,” Doak says, “is that there were so many natural rock features that we were able to preserve — between and protruding into the holes — that it made it all look very natural, even if we had to do a bit of grading to make it work.”

It’s not a terribly long course at slightly more than 6,800 yards, but Doak’s minimalist style fit right into the 700-acre cleft and even allowed him to take chances. “You’re not hemmed in by the homes,” he says, “and so you can do different things visually with each hole.” The result is that incomparable “wow” factor that comes from witnessing something unusual: Standing atop the towering 17th tee, you can see the entire course unimpeded, including a few holes that appear to float in thin air beside an outcrop of rocks. Director of Golf Bill Feil says that, though it looks intimidating, the course plays remarkably kind to golfers of all levels — provided they know what they’re up against. That, Doak says, was his intent. “You want it to challenge the scratch player, but also be playable for the person who maybe isn’t quite as skilled.”

Stone Eagle is one of only two courses in the country to make the top 10 lists of both Golf Digest and Golfweek’s best new courses for 2006.

Membership is by invitation only, which makes sense when you consider the power trio among the founders: Microsoft Chairman Bill Gates, Nordstrom’s namesake Bruce Nordstrom, and Exxon Chairman and CEO Lee Raymond. Homebuyers have the option of building their own houses or purchasing one of Ministrelli Homes’ exclusive designs. Either way, the price is between $2 million and $3 million for homes, $600,000 to more than $1 million for single lots.

For many, like Gates, who already own properties in the Coachella Valley, Stone Eagle is positioned to be a vacation from the vacation with its innovative option known as The Residence Club. Consisting of two- and four-bedroom casitas (in this instance meaning small homes replete with full kitchens, living and dining rooms, and individual lock-off suites), the club allows members to purchase one-eighth ownership interests (starting in the $200,000s for two bedrooms and the $400,000s for the four bedrooms) for yearly stays of three weeks or more, depending upon availability.

Current members belong to hundreds of clubs nationally; many of them belong to two or three in the Coachella Valley alone, which makes Stone Eagle the perfect getaway for those who simply want to get gloriously lost in their own town. You need not own a home to play at Stone Eagle. The club’s national membership program caters to golfers outside the area by offering 21 days of playing time in prime season and unlimited play the rest of the year. Unlike “social-scene” county club that crowd hundreds of homes around a course, Stone Eagle focuses purely on the game and its privileged players.