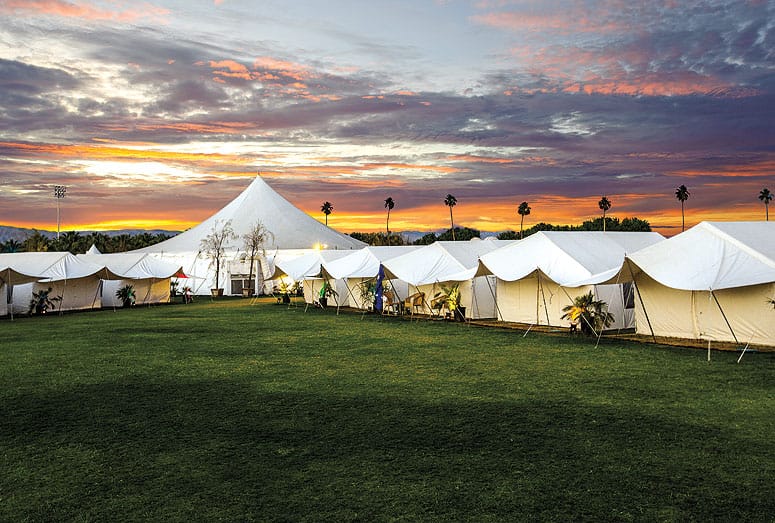 Somewhere at the entrance of an exclusive unmarked parking lot at the northeast corner of the Coachella music festival, they should place a sign to put those of us at a certain age at ease. It should read, “Relax, you’re not too old for this.” Because here the festival organizers have created a reassuring oasis in the desert for the aging rockers and ravers, embarrassed and afraid that going back to a music festival might just be the new midlife crisis. Because here they’ve created something special and unique. They call them “Safari Tents,” the Brits call it “glamping”(glamorous camping), and my friend Andrew calls it the “Cartier polo of musical festivals.”

For those who have left the kids with the grandparents and fibbed about their whereabouts, who still wish to dance like Muppets but get spasms if they’re too far from the Four Seasons, then this is pay dirt — just without the dirt — and lots of pay. It is like they sat down with a two-columned list. On the left they wrote, “Things James hated at festivals as a 20-something” and on the right they wrote, “Things he’d want now that he’s older and wealthier,” and they designed accordingly.

So out went the tent that I could never get to survive the first hour, let alone three days, and in came the Bedouin palace that withstood the inevitable sandstorms sent to test us. It even had floorboards, air conditioning, a framed bed, and an armoire. IKEA never looked so appealing.

Fit for kings and queens, yes. But with decent thrones? Heck, no. Despite great advances in technology and engineering since the first festival flag was planted at Woodstock, the toilet blocks have resisted progress. Presumably the faint, omnipresent, pervading smell of urine and stale beer is there to remind us that yes, this is still a music festival. Mercifully the blocks are placed a very safe distance from the tents — only an issue when nature calls in the middle of the night. Which it will.

When we visited, a giant marquee that would be more at home at an album launch, an on-location film set, or a Malibu bar mitzvah sat at the center of the 100 VIP Safari Tents. By day it stood to feed and water us with breakfast and vodka, and by late night there were snacks and more vodka. Upon our return from the festivities, a disc jockey ensured that if our hearts were still pumping and our legs still game, he had the tunes to satisfy. One look at our dance moves and he had a fair idea what era to choose from. To grease the wheels, an onsite concierge took advance orders for anything to smooth the party — booze, mixers, denture glue.

And it was here, like an obscure cult or an underground fetish club, that we truly realized we were not alone. We met oil execs from Canada, doctors from Portland, Internet entrepreneurs from Silicon Valley, and stockbrokers from London. The bond was fast, and by day two we were sharing our favorite rock ’n’ roll moments as readily as our stash of Jack Daniel’s. It was Retox for the Detox Generation.

And then there was the music. Oh, yes, the glorious music. Perusing this year’s lineup, one truly understands what an indulgence and cacophony of sound it is. It spoils any other music fest. Yet even with that, the Safari Tent people have found a way to take it up a notch. By providing golf carts to shuttle us from stage to stage, wristbands to get us to the front, and access to the “artist area,” the festival’s organizers invented a way for people to never have to cross the carnage of the field. Gone are the crunching of party cups, the dodging of drunkards, and the stepping on of trophies so proudly left on the ground from the night before.

So when day three of our glamping experience called, we sheepishly and begrudgingly returned to the real world. Fear not: The desert always keeps its secrets, and since there were no mud-stained Wellingtons or rain-soaked sleeping bags in our luggage, so did we.

Safari Tents at the Coachella Valley Music and Arts Festival go for about $6,500 a weekend, which includes two all-access “Main Stage” wristbands and golf cart shuttles to take visitors to and from the venue. Guests can be added to the tent for $1,500 each; this fee does not include music passes. Sleeping tents come with one or two beds, linens, tables, flooring, pillows, chairs, air conditioning, and electrical outlets; lounge tents are also available. For more information or to book a tent for next year’s show, visit www.coachella.com/festival-passes.