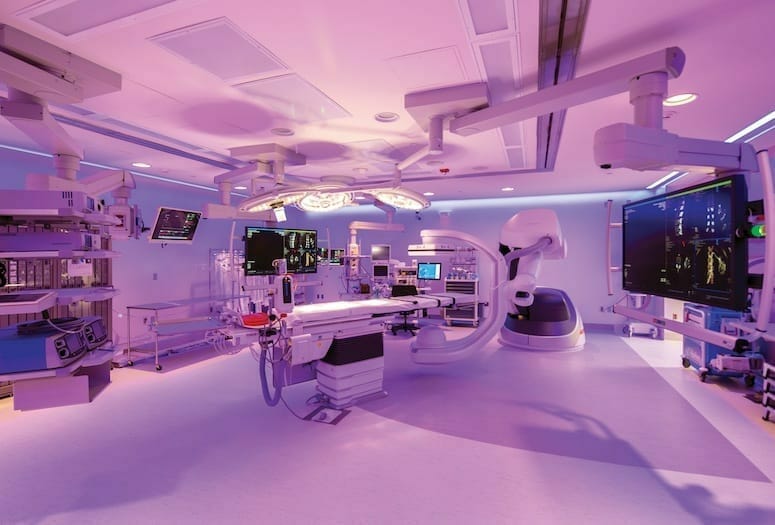 Eisenhower Health’s advanced hybrid suite handles a range of procedures, from endovascular to hybrid to minimally invasive and open surgery.

Often described as picture-perfect, Greater Palm Springs might also be called a picture of good health, thanks to the resort region’s well-rounded and innovative medical community. In recent years, the area’s three once-centralized main medical campuses has given way to an ever-expanding network of urgent care and specialty care outpatient care centers that have dramatically expanded access and care options.

Even the names have changed. Desert Regional Medical began life as Desert Hospital in 1948 after first serving as a facility for wounded World War II soldiers. John F. Kennedy Memorial Hospital, founded in 1966, was called Indio Community Hospital until it was renamed in 1984. Eisenhower Hospital opened in 1971, assisted by celebrity fanfare, eventually becoming known as Eisenhower Medical Center before its latest reincarnation as Eisenhower Health. Each rebranding represents a progressive new way the facilities want us to think about them.

Situated at different ends of the valley, DRMC and JFK appear to be separate entities. For decades, they were. However, their affiliations with Tenet Healthcare Corp. drew them together for a new era of collaboration and, indeed, the creation of a new brand: Desert Care Network, launched in 2018 with DRMC, JFK, and Joshua Tree’s Hi-Desert Medical Center servicing residents and visitors throughout the Coachella Valley and Morongo Basin. 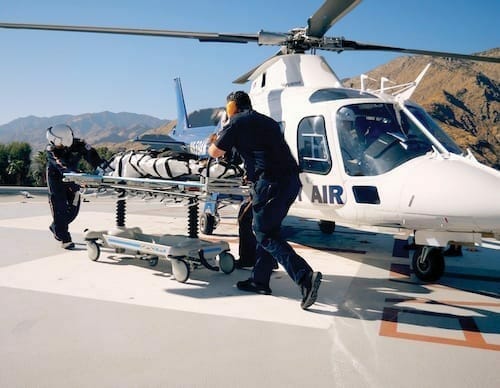 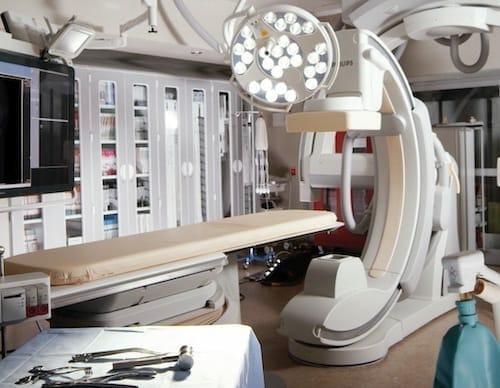 Desert Care Network’s has significantly expanded services at JFK. Since DCN was formed, the Indio hospital has been accredited as a Level IV Trauma Center, a Primary Stroke Center, and a STEMI Receiving Center for heart attack treatment. The Level IV Trauma designation is particularly noteworthy for patients in the East Valley who in the past would have required transport to DRMC’s Level II Trauma Center in Palm Springs — the highest level of trauma care in the Coachella Valley.

“It’s applying the right care, right place, right time philosophy where you try to keep patients as local to their homes and community as possible,” says Michele Finney, CEO of Desert Care Network and Desert Regional Medical Center. Of course, should a trauma case exceed the capabilities at JFK’s Level IV Center, the patient can at the very least be stabilized before being transferred to DRMC’s Level II Center. The two hospital trauma centers work together. 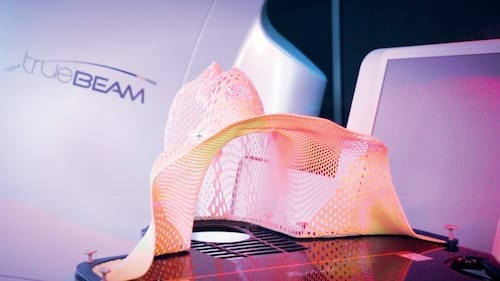 The hospital’s Truebeam radiotherapy system.
All three Desert Care Network hospitals have upgraded their stroke capabilities in recent years. A recent investment at DRMC, an accredited Comprehensive Stroke Center, was the addition of a biplane angiography lab where specialists use tiny catheters to enter the vessels of the brain and remove a clot or stop a bleed that is causing a stroke. Meanwhile, JFK and Hi-Desert Medical Center provide the first line of defense in stroke care and stabilize patients by administering clot-busting drug tPA.

A Broad Range of Care

Other advanced services provided by Desert Care Network include the Comprehensive Cancer Center and Comprehensive Breast Center at Desert Regional. The latter is also the site of a Level III NICU, the highest level of infant care available in the Coachella Valley. DRMC also has a laboratory for advanced treatment of atrial fibrillation, an Advanced Wound Healing Center, and a Center for Weight Management.

Although the larger portion of these healthcare advancements reside at DRMC in Palm Springs, the driving force behind Desert Care Network is collaboration. “We’ve been building out the physicians, the staff, and the equipment at JFK and at Hi-Desert,” Finney says, “so the individuals in those communities can benefit from what I call a hub-and-spoke approach, where you can have a warm transition of care instead of a disconnected transition.”

The collaborative spirit reflects in a physician-led foundation called Desert Care Network–Primary & Specialty Care, which has 13 offices across the region. The foundation provides outpatient treatment in many healthcare areas, including cardiology, orthopedics, neurology, and endocrinology. 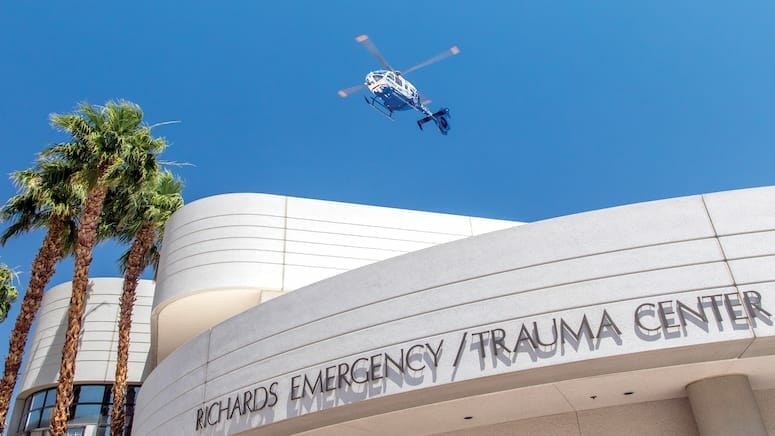 What a difference a half century makes. Eisenhower Health was considered a community hospital in its infancy, but 51 years later, it is a fully integrated health network. To keep pace with growth in the Coachella Valley, the Rancho Mirage institution decided to branch out and offer outpatient care rather than only inpatient care. The past dozen or so years have seen over 80 clinics offering primary, specialty, and urgent care spring up from Palm Springs to La Quinta as well as Yucca Valley.

“It’s been a sea change in terms of the provision of care in the valley,” says Martin Massiello, president and CEO of Eisenhower Health, whose plans call for providing primary care services in Indio in 2023.

Eisenhower Health is recognized for what it refers to as its Centers of Excellence. These include cancer, cardiology, neuroscience, and orthopedics. “Quality of care is our focus, and access to the latest cutting-edge procedures and techniques truly eliminates the need for anyone to travel outside the Coachella Valley for any level of care,” says Ken Wheat, executive vice president and COO. He credits Eisenhower’s highly credentialed medical staff and other clinical providers for the hospital’s nationally recognized quality of care.

Always advancing, Eisenhower Health opened a Family Birth Center a year and a half ago and it recently added a comprehensive movement disorders program. Eisenhower’s expansion into trauma and its official designation as a trauma facility this year are especially noteworthy. Meanwhile, a robust robotic surgery program equipped with six da Vinci robots gives Eisenhower the distinction of being the busiest surgery center in Riverside County, if not all of Southern California. 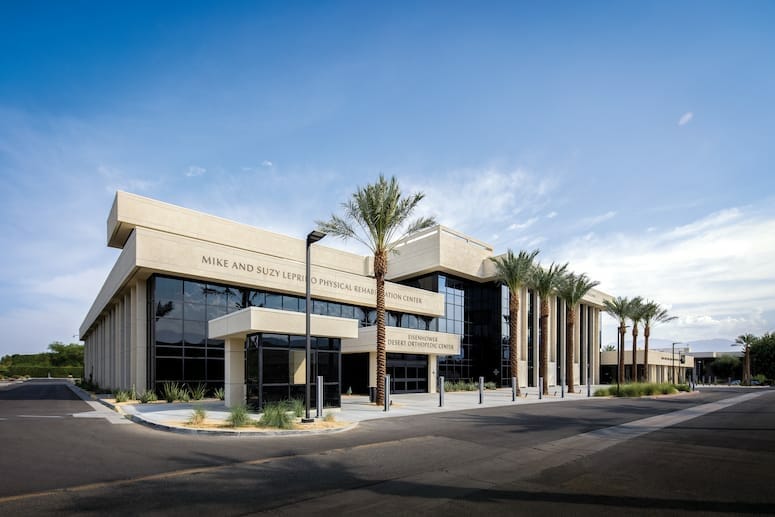 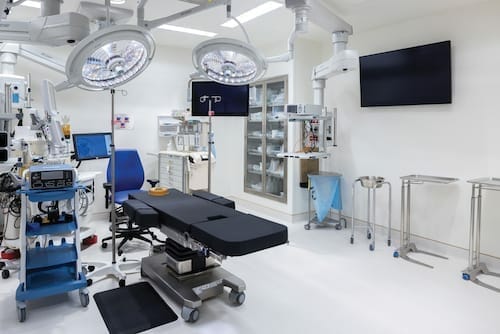 What’s in a Name?

Being a fully integrated healthcare network assures continuity with Eisenhower Health’s information system accessible at all points of care, be it outpatient, inpatient, emergency room, or in other places around the country where patients may live six months out of the year. Eisenhower Health will soon surpass a decade since becoming a teaching hospital, offering residencies in family, internal, and emergency medicine. Several fellowship programs have also developed, including pulmonary, infectious disease, addiction, and sports and geriatric medicines.

“We’ve been able to recruit physicians who are interested in teaching and research to work in the valley because we have an academic program here,” Massiello says. The residency program has led to significant hiring, with upward of 40 resident physicians opting to remain in the area and practice medicine. “The program has been successful in terms of recruiting new doctors to Eisenhower.” 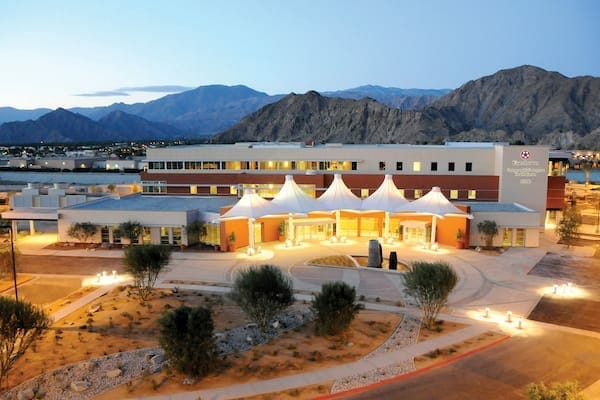 Eisenhower Health has a five-star rating from the Centers for Medicare and Medicaid Services — the only hospital in Riverside County to hold that distinction. Ever cognizant of local demographics, it recently received accreditation as a geriatric emergency department, and the nonprofit advocacy organization Human Rights Campaign designated Eisenhower as a healthcare leader in care for the LGBTQ+ community.

Now, Eisenhower Health is in the midst of a five-year campaign focusing on cardiac services. It hopes to build a center for cardiac and vascular interventional procedures that would include as many as seven new laboratories where it can perform cardiac catheterizations, electrophysiology procedures, and vascular surgical procedures.

The quality of healthcare Eisenhower Health provides is made possible through the directive of its board and generous philanthropy. “The Coachella Valley is very fortunate to have an institution like Eisenhower that is lifted up by the community itself, lifted up by our donors who allow us to provide the kind of excellence and quality the area has come to expect from us,” Massiello says.

• READ NEXT: Move to Greater Palm Springs for Idyllic Quality of Life.