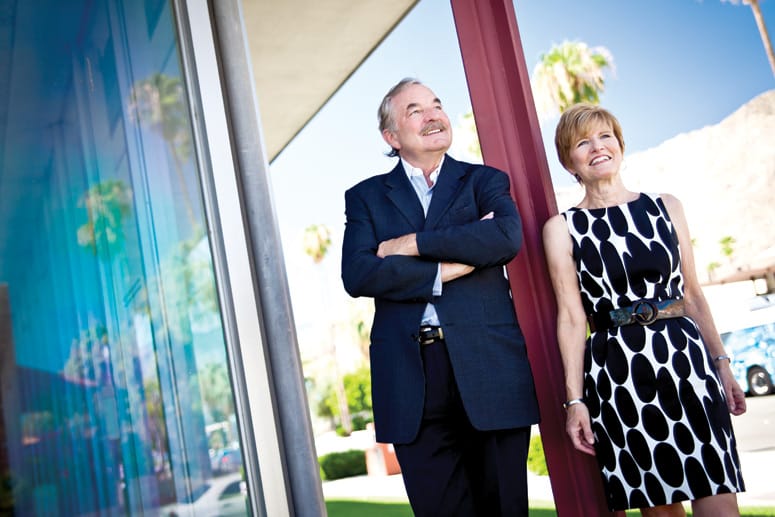 As Steve Nash walks in a sculpture garden off the lower level of Palm Springs Art Museum, it’s hard to know if he is a man at peace or simply enjoying a breath of fresh air amid the flurrying activity as he and his staff and constituents prepare to celebrate the institution’s 75th anniversary.

“This is a pivotal year for us in many ways,” says Nash, the executive director who led the dramatic transformation of the museum for the past six years.

During his tenure, the museum:

• Received a top-to-bottom face-lift, including hardwood floors and brighter, airier exhibition spaces
• Opened a satellite space — Palm Springs Art Museum in Palm Desert — at the corner of Highway 111 and El Paseo. It includes The Galen galleries and the Faye Sarkowsky Sculpture Garden
• Purchased the 1960 E. Stewart Williams–designed Santa Fe Federal Savings & Loan building on South Palm Canyon Drive. The modernist icon will reopen as early as next fall as the museum’s Architecture and Design Center, Edwards Harris Pavilion
• Ballooned its endowment
• Opened exhibitions of national importance, including Picasso to Moore: Modern Sculpture From the Weiner Collection; Wayne Thiebaud: Seventy Years of Painting; Against All Odds: Keith Haring in the Rubell Family Collection; Richard Avedon: Fashion, Stage, and Screen; Beg Borrow and Steal; and Backyard Oasis: The Swimming Pool in Southern California Photography 1945-1982, one of the Getty-sponsored Pacific Standard Time shows that permeated cultural institutions throughout the region
• And expanded its collection through purchase and seismic gifts, including one celebrated in the exhibition The Passionate Pursuit: Gifts and Promised Works of Donna and Cargill MacMillan. It consisted of more than 100 contemporary paintings, sculptures, design objects, and works on paper by 75 historically significant artists.

“It is hard to overemphasize the dramatic importance of the MacMillan gifts to our museum,” Nash says. “The amazingly deep and varied collection of contemporary art marks a turning point in the museum’s history.”

The museum was incorporated in 1938, occupying a single room in La Plaza in downtown Palm Springs. Don Admiral, the first director, organized natural science exhibits, lectures, and hikes around the desert, including Joshua Tree National Park and the Salton Sea.

A financial hiccup closed the museum’s doors until benefactors stepped in with funds and the first membership campaign, which netted about 160 subscribers. The museum reopened in 1940 inside the Welwood Murray Library. Board presidents during this period include architect Albert Frey (whose iconic home now belongs to the museum) and Mayor Frank Bogert. The museum continued its focus on natural sciences, and also exhibited Cahuilla Indian artifacts and photography.

In the 1950s, the museum was situated in a surplus army building on Tahquitz Canyon Way. Former mayor and trustee Philip Boyd spearheaded an effort to open a wildlife sanctuary in Palm Desert; it became The Living Desert in 1979, operating independently from the museum. Meanwhile, back in Palm Springs, the museum razed the army structure in favor of a 10,000-square-foot building designed by E. Stewart Williams that opened in 1958. Highlights from this period include a 1964 exhibition of paintings by Hans Burkhardt and constructions by Arthur Secunda.

In the mid-1970s, Executive Director Frederick Sleight and trustee Walter N. Marks led a campaign for another expansion — another Williams–designed building against the San Jacinto Mountains, behind Desert Fashion Plaza. McCallum Desert Foundation donated $1 million for the natural science wing, and Walter Annenberg donated $1.25 million for the theater. Frank Sinatra was among the other donors, contributing funds for a sculpture court.

The grand opening came in 1976, with board President Leonore Annenberg cutting the ceremonial ribbon.

The drive toward a focus in art, rather than natural sciences, began in 1967, when the board voted to add fine art to the museum’s collecting focus. Joseph Hirshhorn, a trustee who chaired the acquisitions committee, wrote the first collection development plan, and donated a gouache on paper by Alexander Calder. Later that year, Joseph Linsk donated Nude Alone, a painting by Milton Avery.

Soon the museum would mount an exhibition of modern sculpture from the Weiner Family Collection, which has gifted a Hans Arp bronze to commemorate the 75th anniversary. Other exhibitions in this period included Four Centuries of European Master Works and a retrospective of landscape paintings by James Swinnerton.

“The Hirshhorn plan set the direction for a dynamic future of our collection and exhibition program, and the loans and gifts from the Weiner Family Collection have provided the foundation for our modern sculpture exhibitions,” says Chief Curator Katherine Hough.

The first exhibitions at the museum’s current location — which made the museum the top cultural destination in the Coachella Valley — were Photographing Earth From Outer Space, on loan from NASA, and an adventurous show of optical-kinetic artwork by Yaacov Agam.

When the board voted to emphasize Western American art, the museum dedicated a new wing, which moved staff into a separate administration building.

The museum grew into its space in the 1980s, and published a history of the institution. Its first major gift of art came in 1994, when interior designer and art collector Steve Chase donated $1.5 million for a new wing, along with 132 works of contemporary art. Williams came out of retirement to design the additional space, which opened in 1996.

Art had begun to eclipse natural science, triggering great debate among the leadership for several years. The harbinger of a transformation came in 2005, two years before Nash took over as executive director, when Palm Springs Desert Museum dropped “Desert” from its moniker in favor of “Art,” and eliminated natural sciences from its mission.

It was part of a three-point plan conceived by Harold Meyerman, chairman of the museum’s Board of Trustees, who had set out to achieve financial health, renovate the main building on Museum Drive, and recruit a well-respected director.

“To be great, we must be a successful institution that manages its business well,” Meyerman says. “Almost all of our supporters are businesspeople; they expect the museum to be managed well. If we are successful at that, we can attract financial support, and it will instill confidence in collectors who can donate art.”

“None of this would have been possible without an amazingly qualified, widely recognized and highly respected executive director,” Meyerman continues. “[Nash], in turn, attracted Daniell Cornell, who has added greatly to our curatorial strength and reputation.”

The new leadership, which remains in place on the eve of the museum’s 75th anniversary, has given the museum’s facilities, collections, exhibitions, and educational programming a fresh shine.

“At first it was a dream,” Nash beams. “Now it pervades our organization, collections, and reputation. We’re hitting a crescendo, and we have to manage the growth and the financial challenge of taking on two new facilities. We’re working hard on our endowment. We want to continue to give a quality experience with serious art and serious exhibitions.”

With attendance, giving, and membership up significantly since he took charge, Nash is looking ahead. The Palm Springs Downtown Redevelopment Plan designates ample space for expansion across the street from the museum. “Our main building is inadequate for the exhibition and storage of our permanent collection,” Nash says, adding that the museum contracts for a “considerable amount” of off-site storage. “Future administrations will have to address the need for more space. I believe the addition of a new wing or a new building by an outstanding contemporary architect could become another endorsement of the museum’s role in the study and preservation of modern architecture.

“Architecture is part of the collection that will expand significantly in the next 10 years,” Nash continues. “We’re developing a lot of new friends of the museum from the architecture and design community.”

Visitors should watch for technological upgrades, including long-distance learning programs, live streaming of lectures, sharing of electronically based artwork between museums, virtual tours on mobile devices, and access to information about permanent collections and exhibitions.

“One’s mind can even embrace such notions as museum walls transformed into computer screens, walk-in virtual experiences of architectural monuments, and the ability to carry on conversations with artworks,” Nash says. “It’s exciting to contemplate the possibilities.”