Heavenly Confections Baker Puts Her Own Twist on Pumpkin Pie 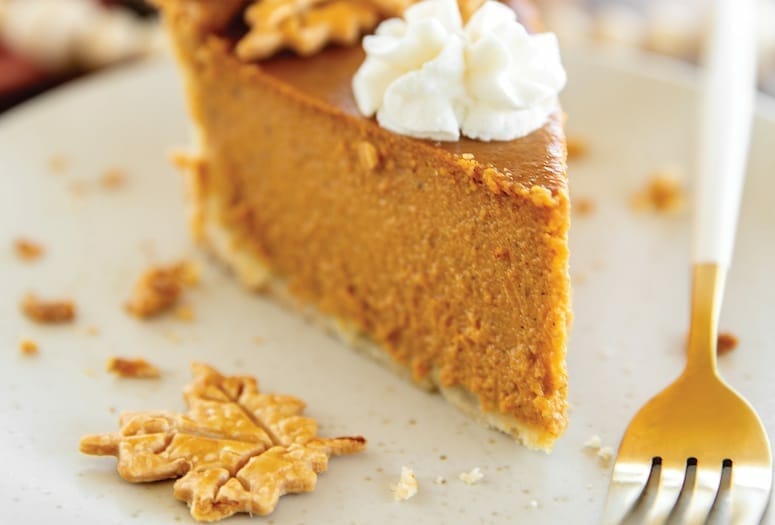 “I think pumpkin pie just reminds you of growing up. It really is the classic holiday pie,” says Jenny Montez of Heavenly Confections.
PHOTOGRAPHY BY MOLLIE KIMBERLING

When it comes to favorite recipes, we often focus on heirlooms — memorable meals our mom made or recipes handed down from a grandmother or great aunt.

That’s not the case for Jenny Montez’s über-creamy, fall-flavored pumpkin pie. The Coachella native began teaching herself to bake seven years ago, prompted by a dire emergency: Her son requested caramel apples to share with his class for his birthday, but the baker Montez commissioned forgot to make them. She sent her 5-year-old to school with store-bought cupcakes and vowed to learn to make her own caramel and belatedly fulfill her beloved’s birthday wish. After scouring cookbooks, surfing the internet, viewing YouTube videos, and with a bit of trial and error, she created the perfect scratch-made caramel with a consistency just right for glazing Granny Smiths.

“I kept getting it wrong,” she says. “It was too hard or too soft. I must have gone through an entire apple tree. After about a month, I finally got it, and it was amazing.”
She moved on to mastering chocolate for dipped strawberries and later added cakes, pies, and other splurge-worthy desserts to her repertoire, tweaking recipes she found online until they became unequivocally hers.

“Before I would make a dessert,” Montez says, “I’d read four or five different recipes to see what the differences and similarities were and what they used and what they didn’t use. Then, I’d gather what fit my style and do my own thing .” 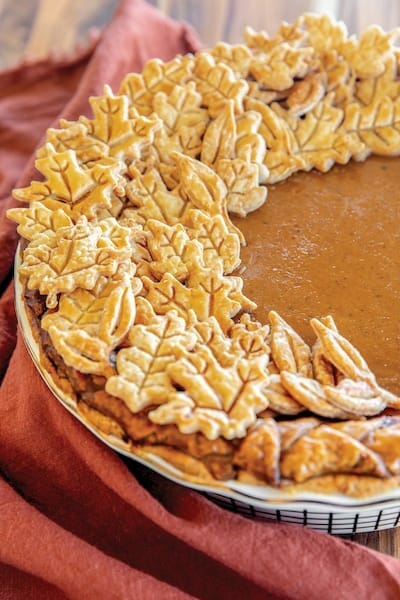 Montez has since made baking her career, launching a home-based business, Heavenly Confections, that sells everything from colorful cupcakes to decadent cheesecakes to intricate meringue pies to, yes, caramel apples, including her signature s’mores version, which is as addictive as it sounds.

In November, she offers dessert boxes loaded with mini seasonal specialties like pecan pies, banana and pumpkin latte loaves, and that almighty Thanksgiving spread staple, the pumpkin pie, which she makes for her own Friendsgiving dinner each year. “I think pumpkin pie just reminds you of growing up,” she says. “It really is the classic holiday pie.”

To produce her own, she started with a Martha Stewart recipe (“I think she’s the best,” Montez says), then weaved in ideas from recipes she found on Pinterest, all the while trying to come up with a unique ingredient to put it over the top. She goes with the retro spread Marshmallow Fluff.

“I use a little less sugar and fold in the Fluff to make the filling a little creamier and sweeter,” Montez explains. “One of the most important ingredients is cinnamon. Everybody loves that, so I use extra. Then, I add anise and a bit of fresh cloves I crush to give it a little more fall flavor. I’m always thinking, ‘What can I add to make this different and not taste like a store-bought pie?’ ”

The ingredients also flavor the house. “You don’t need a scented candle when you’re baking this pie,” she says. “Those spices just warm up your home.”
Other tricks to perfect her pumpkin pie include letting the filling sit for 20 minutes after mixing it, so the flavors meld together before pouring the combination into the crust and placing it into the oven. “I use a convection oven to distribute the heat evenly and bake it consistently.”

Of course, the crust is as important as the filling. Montez models hers after the buttery French pastry crust pâte brisée. To make sure the butter is as cold as possible, so it doesn’t melt into the flour, she freezes the butter and then grates pieces into the dough.

“You have to find the perfect balance between crust and filling. You can’t have a really thin crust and too much filling,” says Montez, noting that she usually puts 2 inches of filling atop a 1-inch-thick layer of baked crust. For aesthetics, she cuts decorative fall-themed leaves from the crust’s dough (it’s easier with a mold) and bakes them on top of the pie. She tops the whole thing with her homemade whipped cream. The result is a pumpkin pie that everyone saves room for … no matter how much turkey and mashed potatoes they’ve devoured.

“I’ve actually found that people look forward to dessert the most, since you go a whole year where you don’t taste pumpkin, or you don’t taste those warm, comforting fall flavors,” Montez says. “Thanksgiving is all about comfort food, and this is just so good and comforting. I think people gravitate to food that brings them joy.” 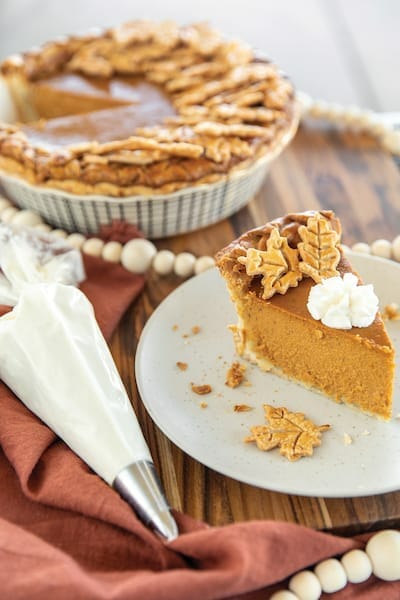 • On a lightly floured surface, roll out pâte brisée to a 13-inch round, about 1/8 inch thick. Fit into a 9-inch pie dish. Trim edge, leaving a 1-inch overhang. Fold edge under and crimp as desired. Refrigerate 30 minutes.
• Preheat oven to 375 degrees. Line crust with parchment paper and fill with pie weights or dried beans. Bake until crust is set, 30 to 35 minutes. Remove pie weights and parchment and continue to bake until bottom of crust is lightly browned, about 10 minutes. Remove from oven and let cool slightly. Brush crust with egg white. Let cool on a wire rack.
• In a large bowl, whisk together eggs, pumpkin, evaporated milk, brown sugar, Marshmallow Fluff, cornstarch, vanilla, cinnamon, ginger, ground cloves, anise, 1/2 teaspoon salt, and nutmeg.
• Reduce oven temperature to 325 degrees. Pour pumpkin mixture into cooled crust. Bake until center is set but slightly wobbly, 50 to 55 minutes. Let cool completely on a wire rack. Refrigerate until chilled, at least six hours and preferably overnight. Slice and serve with whipped cream, if desired.

• Pulse flour, sugar, and 1 teaspoon salt in a food processor to combine. Add butter and pulse until pea-size clumps form. Drizzle 1/4 cup ice water over flour mixture. Pulse until mixture just begins to hold together when pinched. (If too dry, drizzle with more water, 1 tablespoon at a time, and pulse a few more times.)
• Divide dough in half and transfer each to a piece of plastic wrap; cover and press each piece into a disk. Refrigerate until firm, for at least an hour.