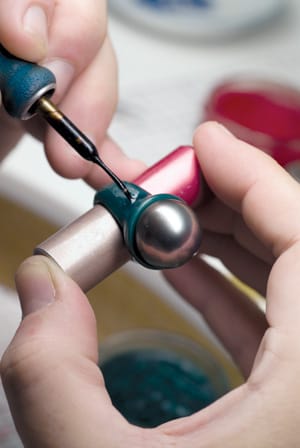 Three jewelry designers in a glass-enclosed atelier mold wax, sort through colored stones, and refer to sketches as they create the next gold ring and necklace with a gemstone cross pendant.

In another glass-enclosed area, goldsmiths mold 22K rings and bracelets.

It’s noon at Denise Robergé, a compound at El Paseo and Portola Avenue where inspired jewelry makers are flanked by the namesake’s art gallery and Augusta Restaurant. At a large leather and wood bar, Rick Sonleiter pours a glass of champagne for a customer trying on a series of large rings with cabochon stones set in heavy, lustrous gold.

“Denise believes you work hard for your money,” Sonleiter says, “and she says you should have fun while you’re spending it.”

From her mezzanine office, Robergé peers at the activity she set in motion that morning. Diminutive at barely 5 feet tall, she’s big in the community. Sporting black leggings, a white print oversized shirt, black stilettos, and a large gold ring of her own design — defying the fashion proportion rule for small people — she sits amid furniture that is a cross between the Neiman Marcus Christmas Book and Dr. Seuss’ Cat in the Hat. A cockatoo in a cage beside her desk eyeballs her every move.

“It’s all about attitude,” says head jewelry designer Ann Fagin. “She has the self-confidence to wear the biggest pieces.”

Certainly in today’s world of interlocking Cs, repetitive Gs, and overlapping LVs, to enter Robergé’s world is to step into a place with a daring twist on elegance and sophistication — a retreat for the indulgent individual whose self-confidence trumps ubiquitous commercialism.

We have our niche and we stick to it,” she says, referring to the jeweler’s foundation of creating dramatic, 22K gold jewelry for women who know themselves and express their tastes.

“Women who come here want the look and the feel of 22K gold, not glitz,” she continues. “Twenty-two karat gold doesn’t handle glitz. But it does handle big stones — and it is timeless.”
It also is expensive. The cost of entry into the realm of Robergé jewelry starts at $1,900 for a plain gold ring and $2,500 for a gold pendant. A gold bracelet may cost $7,900. Beyond pocketbook consideration, the buyer’s mind is the only limit.

“Jewelry has to look as though it’s worth what you paid for it,” Robergé says. Her influence is clearly Old World — Russian, European, even Egyptian — with contemporary execution. Most gems are semiprecious stones, cabochon or in tick-tack-toe crosses. Her thin, gold bangles are meant to be stacked — but in limited and always odd numbers. “The eye doesn’t like even numbers,” Robergé explains. “You need threes or fives or sevens. It bothers me when someone walks in with two bangles. I have to adjust something.”

Robergé personally buys all the stones, looking for shape, color, and clarity. “I am inspired by the stones themselves,” Fagin says. “For me, it’s like creating a sculpture each time. And if it doesn’t work out, we melt it down and start over again. But I can’t think of a piece I did that a customer didn’t like.”

Custom pieces account for about 25 percent of the business during the season. But even “stock” pieces are unique, such as an opera-length pearl necklace with a gold Maltese-inspired cross tipped in black onyx.

“Denise has amazing ideas,” Fagin says. “She is beyond cutting edge.” One such idea this season is using stingray skin on gold jewelry — an effect that resembles leather, but with more texture. One cuff bracelet with gold backing has stingray skin covering the outside and a large cabochon stone in the center.

Robergé’s innovation extends beyond jewelry. “Denise chose this property for her store at a time, 10 years ago, when there was nothing at this end of El Paseo,” Fagin says of the Palm Desert headquarters where Robergé also runs an art gallery and adjacent restaurant.

“She even chose the [tangerine] color. She stuck to her guns. Now people are trying to copy the color.”

For someone who calls herself “basically conservative,” Robergé continues to surprise her staff.
“Denise is fun to work for,” says goldsmith Gary Nitowski. “She’s spontaneous. You never know what’s coming next. Another idea could be brewing right now for all we know and then — BANG! — we’re doing it. Like this building. We used to be where Starbucks is now [El Paseo and San Pablo]. None of us knew what she was thinking, and all of a sudden we’re getting plasma cutters and working on the sheet metal ceiling.” The staff, under Robergé’s direction, literally created the interior of the new building.

We took a year off from jewelry-making and worked on the building,” Fagin says, referring to the conversion of the former Security Pacific Bank site that now houses the Robergé empire. All that’s left of the bank is the vault, where Robergé keeps stones and jewelry and sets out her solid gold, bejeweled chess set inspired by an early 1990s visit to Moscow to check out arts and antiques.

“Denise wanted to make [the chess set], so we did,” Fagin says. No one has updated the original $145,000 price. But no one has inquired seriously about buying it, which is just as well, since Robergé is not serious about selling it.

Canadian-born Robergé began her professional life in Vancouver as a computer systems analyst. When cotton textiles from India caught her eye, she tried importing textiles. She found the foreign system too difficult to navigate comfortably; but on her way home, she bought a large ruby for $800. When, at home, it appraised for $10,000, she figured she had a future in gems. But the ruby eventually turned out to be worth only $300. Instead of lamenting her loss of good fortune, Robergé went to New York and educated herself about buying and selling precious stones from old-hand dealers.

“Denise knows this business inside and out,” Fagin attests. “She has done every single bit of it herself.”  Robergé shares her passion for knowledge-by-doing with her staff. She takes them to visit the experts. “We’ve been to Germany to learn stone cutting, and we’ve been to Polynesia to tour pearl farms,” Fagin says. “I’ve learned more here than I ever could in any school. These experiences help you as a designer.”

Robergé also takes care of her staff. “Denise is more than a boss,” Fagin says. “She’s there if we need someone. She’s a passionate person, very hands-on, very down-to-earth. It says a lot about a person who can assemble a group of people around her who work well together and who stay.” Fagin has been with Robergé for 15 years, the others an average of 10 years. Robergé includes them in social aspects of her life: Christmas parties in Las Vegas via private jet, box seats and catering for The Who concert in Indian Wells. “We work hard, and we party hard,” Fagin says.

Robergé also is loyal to Palm Desert, where she set up shop in 1985. She has few other outlets: one vendor in Tulsa, Okla., another in Vail, Colo. “I have no desire to open up another 10 stores,” she says. “Then it’s people management, not jewelry design.”
She seeks to build loyalty among her customers by watching out for them. “There’s an art to buying jewelry,” she says. “If a woman wants a pair of earrings, for example, we analyze her body parts, her earlobes, her neck. We will go through the whole store to find something that looks right on her — or we can make it.”

She knows the pull of her business: “Buying jewelry can be addictive. Thank goodness!” At the same time, she restricts sales.

“We actually have to cut some women off because we don’t want them to get into trouble with their husbands or to have buyer’s remorse,” she says. “If that happens, they may not come back.”

Above right: A goldsmith works on a wax model of a black pearl ring.