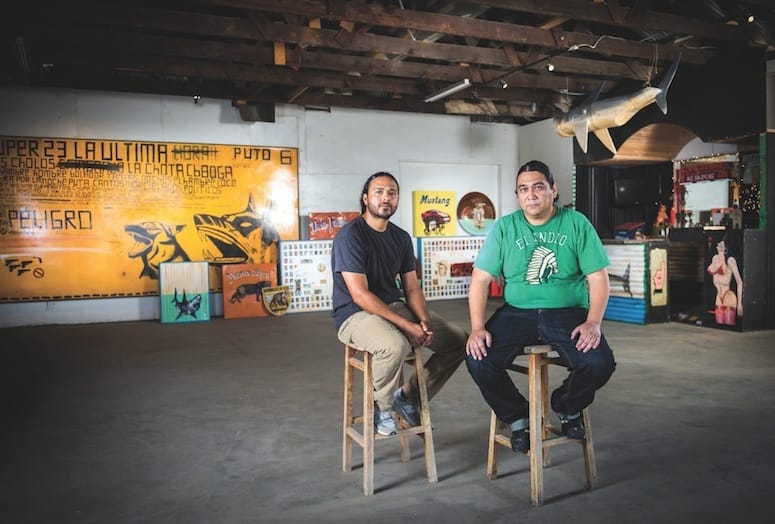 When outsiders think about the Coachella Valley, the resurgence of Palm Springs and the annual Coachella Valley Music and Arts Festival in Indio typically come to mind. Caught up in the publicity and lore of these two destinations, some might think this region is all sun, fun, glamour, and prestige. The reality, of course, is much more layered and complex.

Before the valley was developed for resorts, it was developed for agriculture, most notably dates, which were famously imported from the Middle East in the early 20th century, and table grapes. Agriculture remains a core sector of the local economy, and farmworkers — almost all of them immigrants from Mexico and Central American countries — dominate the population in the eastern valley cities of Coachella, Indio, Mecca, and Thermal.

Artists Armando Lerma and Carlos Ramirez, who collaborate as the Date Farmers, grew up in this environment. Lerma’s family owned a date farm and Ramirez at one time worked on one. They didn’t choose the name Date Farmers; the first gallery to show their work casually bestowed it on them and it stuck. They didn’t care for the name at first, but they have come to appreciate its metaphoric potential. Paintings by the Date Farmers.

“We’re farming time,” says Ramirez, gesturing toward a pile of collages in progress at their studio in the city of Coachella. The Date Farmers have a knack for scavenging discarded materials and disparate cultural images and wresting them together to create new and intriguing meanings. Sheets of corrugated metal become canvases for paintings, and thoughtful juxtapositions of textures and symbols immediately catch the eye and become endlessly absorbing. Rows of poker chips become abstract motifs. The head of the mythical Greek figure Medusa appears in front of an ad for a Ford Mustang. A vampire glowers in front of a Playboy bunny. Ronald McDonald dances with a large wolf spider. Scraps of comic books meet graphic photographs.

A sense of constant migration informs this work, along with the clashing and merging of cultures — U.S. and Mexican, urban and rural, high and low. The work resonates on a deep level, although it can be difficult to articulate why. The artists generally avoid assigning meanings to their pieces. “Our work is the result of deep dialogues,” Lerma says, referring to their process. “We don’t plan it. We don’t have set ideas ahead of time. We let the art direct us.”

Ramirez adds, “We compose with subconscious ideas, which people can then pick up.”

Lerma and Ramirez started drawing at an early age, with no prompting from family members, who would have preferred for them to pursue more practical vocations. Both received a measure of artistic training in middle school and high school — and ultimately rejected what they learned after realizing they fit into no particular artistic lineage and could not afford the requisite oil paints and stretched canvases.

Instead, they turned to what was available: objects they found on the streets and gleaned from popular culture.

“That was the most important lesson for us,” Lerma says. “Just be yourself. Don’t try to be what you’re not.”

The artists met in 1998 when they were included in a local group show. With their similar aesthetics, they connected instantly. As neither knew any other serious artists, they found themselves spending more time together, engaging in long discussions and then collaborating. Neither cites any particular artist as an influence. Rather, they reference African and Asian folk art, as well as “people who had something to say, and said it,” such as Cesar Chavez and Malcolm X, Lerma notes. Ramirez, whose mother was a migrant laborer who worked with Cesar Chavez during the grape boycott of the 1960s, asserts that “the truth” is a profound influence on their art.

After almost two decades of developing and showing their work, the Date Farmers have amassed critical and popular acclaim. In 2008, the office of presidential candidate Barack Obama called on them to create one of his campaign images, and in 2010, they were picked up by Los Angeles’ well-respected Ace Gallery.

While their art communicates on many different levels, the Date Farmers are clear about the roots of their efforts, which lie in the lives and struggles of the immigrant community from which they hail.
At the same time, they hope to send some strong messages to aspiring artists. “Do whatever you want to do,” Lerma says. “Represent creativity in its purest form. There is no excuse for not doing it.”

The Date Farmers’ work appears in Sign Language, a group show at the CSUN Art Galleries, through Dec. 12.