Helene Galen — the highest profile female philanthropist in the Coachella Valley and a crucial resident since 1980 of what she calls “the paradise” that is Rancho Mirage — has taken two tellingly motivating things along with her throughout her action-packed life. Together, these recipes for a splendid existence provide a vivid snapshot of a woman who can neither stop giving of herself and her great wealth any more than she can deny her voracious need for art and joy.

The first of Galen’s life-long take-aways is the opening line of a Charles Kingsley poem. Her Luton, England, school’s headmistress wrote it in the British-born Galen’s yearbook after Helene announced that she was to become a high school dropout at age 15: “Be good, sweet maid, and let who will be clever.”

She recalls the quote while seated in a simple blue cotton blouse and jeans at the marble living room bar of her art-packed Tamarisk Country Club golf course-side home — the former abode of her late, dear friend, Barbara Sinatra during her marriage to Zeppo Marx. Galen is chairman of the valley’s essential Barbara Sinatra Children’s Center, which she cofounded with Sinatra. “I’ve never let go of that poem’s line — it’s been my guide. It’s saying, ‘Let others do what they want. You do the right thing.’”

And so she has.

The widow of billionaire banker Louis “Lou” Galen, she is seen by many as a mythic figure in Southern California. That’s due to the multitude of local board positions Galen has held for years, along with the untold millions she’s given to medical, Jewish, and arts institutions, organizations, and charities in Rancho Mirage, Los Angeles, and the entire Coachella Valley. “Which, unfortunately, makes you very high profile,” Galen sighs with a shrug, referring largely to the Rancho Mirage High School’s Helene Galen Performing Arts Center, the Eisenhower’s Helene Galen Auditorium, and Palm Desert’s Palm Springs Art Museum-run eastern outpost, The Galen. The Galen Center, University of Southern California’s basketball/entertainment arena in Los Angeles also bears the couple’s name.

“My name is all over the place,” Galen says with a droll roll of her eyes. “And many times I’ve been a little embarrassed by it. But I think it’s really important. There are so many opportunities to help here in the valley and it sets an example for somebody else to give money.”

Her partner of 12 years, Jamie Kabler, the founder of the wildly successful Rancho Mirage Writer’s Festival (which Galen helped make possible by gifting the festival its first donation), agrees. “Today, Helene gives $50,000 annually to the Writer’s Festival and it’s matched by Harold Matzner and the Auen Foundation.

David Green, the veteran performing arts director who created the seven-year-old David Green’s Musical Theatre University at RMHS, is another beneficiary. “Most of our graduated alum are now studying in leading conservatories and universities, from N.Y.U. to Boston Conservatory,” he says. “Helene directly supports our students’ dreams. Not only financially, but with her presence. Her presence is huge. Helene’s not just a name on a building for us, she comes to every show we do, meets the kids afterward, and talks to them like young professionals. She’s the wind behind these kids’ dreams.” 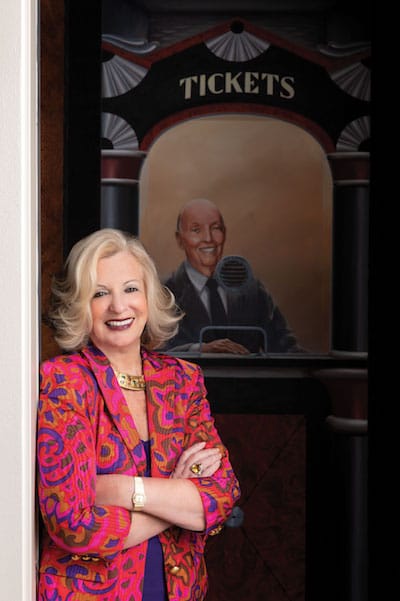 Helene Galen stands in front of a portrait of her late husband, “Lou,” at the entrance to her home screening room. 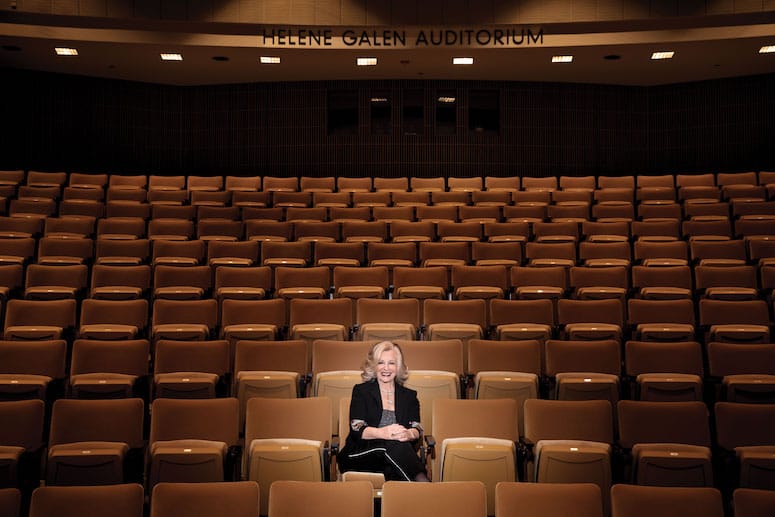 Helene Galen is front and center at the auditorium that bears her name at the Eisenhower Annenberg Health Sciences Building.

“With David Green’s Musical Theater University and its incredible facilities there, it’s better than anything in New York,” says Kabler. “And so now there’s the Richards Center for the Arts at Palm Springs High School, where other private citizens like Helene have given money, too.”

Galen’s close pal, Sally Berger, a trustee at Eisenhower and last year’s AFP, Desert Communities Chapter’s Outstanding Fundraising Volunteer award recipient, understands what drives Helene’s philanthropy. “I think what motivates her is her natural generosity and her gratitude and awareness of how lucky her life turned out,” Berger says. “She feels things deeply so the whole valley benefits from the kind of money Helene gives. We have a great theater with the McCallum [where Galen serves on the board], a cutting-edge hospital with Eisenhower, and much more. To have Helene here is a godsend for the whole community, because it’s so necessary in the desert. Helene will always be remembered with a smile, because she’s done such amazing things for others here for many, many years.”

Born Helene Caro to a milliner and his wife in London, Galen was just a girl of 7 when, due to the WWII blitz, she was mandatorily evacuated with her older sister to Wales to live with a coal miner’s family. “But it was a marvelous experience,” she sunnily recalls. At 11, she relocated north of London in Luton with her mother, brother, and sister. Being “whip smart,” says Kabler, Galen landed a school scholarship in Luton. “I was there four years and was at the top of my class. But after four years of French, two years of German, and one year of Latin, I felt that that was enough.” In short order, Galen learned typing, shorthand, and bookkeeping, commuted to a job in London with an import/export company, then emigrated with her mother and father to Toronto to join her brother and sister who had already emigrated there.

By 1951, she’d wed her first husband, borne two daughters, and then made, she says, “My final move to what was always my family’s dream: California.” She lived in the San Fernando Valley and she became an American citizen in 1958. Before long she landed a job at that emporium of naughty lingerie, Frederick’s of Hollywood. “Oh, it was marvelous,” says Galen. “I couldn’t wait to get there every day. It was so exciting!”

After seven years at Frederick’s, she went the stay-at-home mom route, but only for a time. When she went back to work it was assisting financier, Victor Carter. Galen says Carter was “the then No. 1 Jewish financial guy in L.A. and a big supporter of Israel. I got a whole education in philanthropy, which came in very handy.” 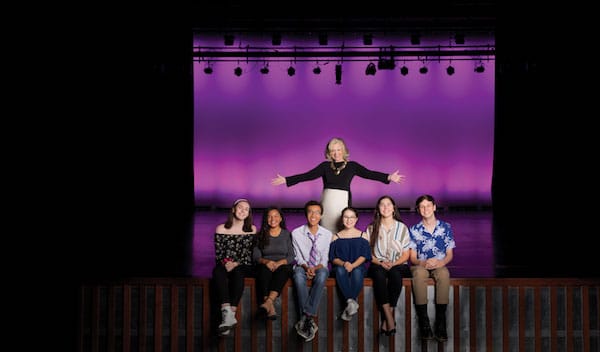 Soon, Lou Galen entered the picture. After meeting him on a blind date in 1973, the two were wed in 1975 and remained married until his death in 2007. The rest is philanthropic history.

“Everything that Helene does is a 10 on a scale of 10,” says Harold Matzner, Galen’s male, mega-philanthropic desert counterpart. “When you look at Helene’s generosity in this valley you have to think, ‘What are the charities she hasn’t given to?’ She’s given the Palm Springs Art Museum more than $5 million. She’s been an underwriter and important part of the strategy of developing the Palm Springs International Film Festival to create what’s become an extraordinarily successful event,” says Matzner, who is its chairman. “I’ve given over $5 million dollars to Eisenhower Health and I’m sure she has, too. It would take 10 pages to list all she’s done here.”

“Visual arts, music arts … they’re God’s gift to mankind. What more can human beings want out of life? We’ve got lots of bad stuff we don’t want, but art is the stuff where we have the choice. It’s crucial for the soul.”

Matzner also notes her relationship with Kabler. “She and Jamie are a great combination. They’re always in action, looking for what needs to be done. What they do benefits the quality of life for thousands and thousands of people in this valley. And,” Matzner adds with a fond chuckle, “she’s got a great laugh and a great sense of humor.”

Which brings us around to that second thing Galen states she’s been taken with her whole life.

“When I was a little girl I fell in love with Carmen Miranda,” Galen reveals, her eyes popping like that of the Brazilian, tutti-frutti-hat-wearing movie star/samba singer. “At only six or seven, wherever I went I impersonated Carmen singing, ‘I Yi Yi Yi Yi (I Like You Very Much).’ And I took it with me all my life. She’s still really important to me, she really is! You know Grandmother’s Day at school? Most grandmothers went in and told a story. I go in and do Carmen Miranda,” says Galen, promptly showing off her sensational rolled R trills.

This adorable whimsy comes from a serious woman who all agree is brilliant at money, fundraising, and organizing. “She asks these amazingly pertinent questions in board meetings, followed by incredibly fresh ideas,” Berger reveals, completing the portrait of the woman. Her home’s museum-worthy art collection, stocked with important works by such illustrious folk as Alex Katz, John Buck, Andy Warhol, and Nick Cave, further illuminate her happy-go-lucky, joyous side, amped as it is with kooky, colorful pieces by artists such as desert ceramicists, Maberry and Walker. “Just look at that wonderful, funny piece of theirs in the kitchen — it’s smiling!”

“Visual arts, music arts …  they’re God’s gift to mankind,” Galen preaches. “What more can human beings want out of life? We’ve got lots of bad stuff we don’t want, but art is the stuff where we have the choice. It’s crucial for the soul.”

So what we have here is a 100 percent committed philanthropist, arts patron, and insatiable lover of life who is filled with enthusiasm and care for others. And we’ve not even clocked that Galen is a fervent home entertainer who’s forever morphing her house into party central for myriad local institutions and charities, such as Michael Childers’ annual benefit, One Night Only; for hosting world-renowned names from Sean Penn to Eli and Edythe Broad; and for dinner parties thrown for her many adoring friends.

It seems fitting to have Matzner, one of her biggest admirers, serve up the final summation of the valley legend: “She’s spectacular in every way.” 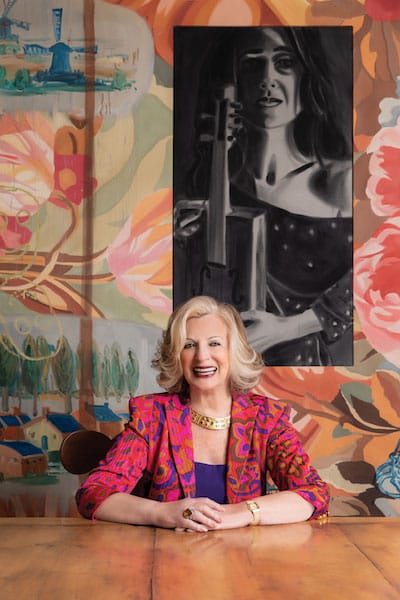 All smiles seated in her dining room in front of her prized painting by David Salle.