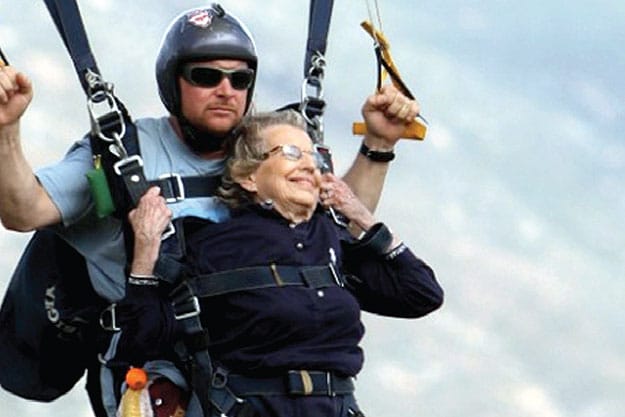 A 90-year-old woman straps on sky-diving gear and jumps in tandem with an instructor out of a plane at 13,000 feet. With that bold move, Estelle Eisenberg crosses one more thing off her bucket list.

Another sassy senior, Edna Baldwin, at 91, gets behind the wheel of a NASCAR sanctioned racecar at Southern California’s Toyota Motor Speedway and speeds her way through a once unrealized dream.

These are only a couple of examples of how Jump!, a nonprofit organization founded by La Quinta resident Webb Weiman, helps seniors fulfill goals, dreams, and wishes in their golden years.

When Weiman’s parents died — his mother at 58 and his father at 83 — they were both still active and he felt they had life left to live out some bucket list items if they had been given the opportunity.

This realization stuck with Weiman through the years, and when he met skydiving Estelle during a presentation his wife gave at a retirement community, he learned that the 89-year-old wanted to spend her 90th birthday free-falling in the sky. But she had no idea how to go about it or if it were even possible.

Weiman knew then that he had found a way to honor his parents and inspire seniors to go after their own individual gold.

There are many stories like Estelle’s and Edna’s on the Jump! website, including an 89-year-old softball player who wants to hang glide his way into 90.

Jump!’s mission statement succinctly describes what might be considered Weiman’s own bucket list: Inspire seniors to take a leap of faith in fulfilling their dreams; sustain relationships with those who maintain these active lifestyles; and to have a positive and everlasting impact on their lives.