Herb Alpert in his Malibu studio (2019)
PHOTOGRAPH BY MARK DAVIDSON

Astute collectors, the late Walter and Leonore Annenberg graced their Rancho Mirage estate with an abundance of museum-caliber impressionist and modern art, antiquities, serving ware … and one totem pole.

“They wanted a ‘pole of distinction’ for their golf course,” says Anne Rowe, director of collections and exhibitions at Sunnylands Center & Gardens. “They researched carefully and consulted experts.”

The quest that began in 1972 led the Annenbergs to commission a pole from Henry Hunt, an iconic figure in cultural preservation, a legendary carver among the First Nations people of Canada, and a Royal British Columbia Museum chief carver.

Having a legacy of promoting a global exchange of ideas, the Annenbergs surely would be pleased about the Sunnylands exhibition running through June 7, 2020. Reach for the Sky: Tradition + Inspiration marries the works of a son and grandson of Henry Hunt with that of trumpeter Herb Alpert, who is represented in the Annenbergs’ record album collection.

Rowe arrived at the juxtaposition of artists from Vancouver Island, B.C., and Malibu, Calif., serendipitously, but borne from an idea formulated over years. 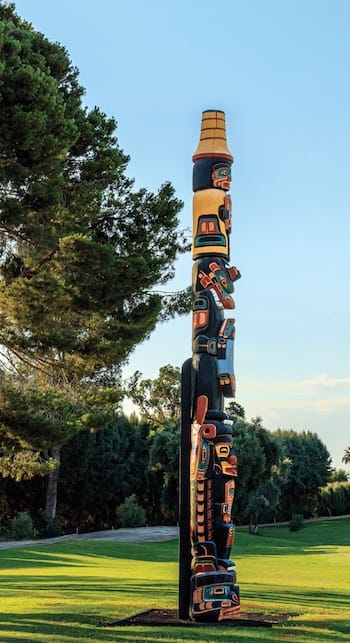 The original Henry Hunt totem on the green at Sunnylands. 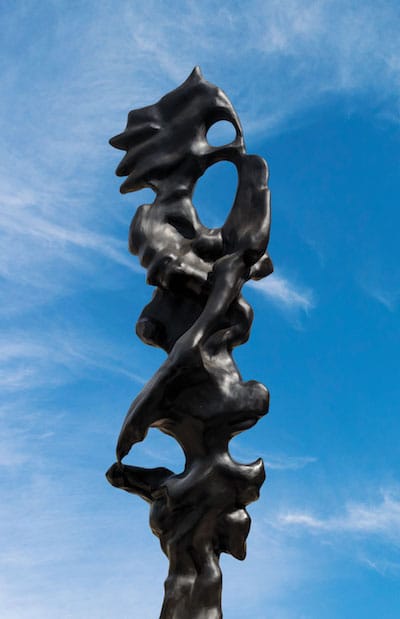 As Sunnylands opened to the public in 2009, the totem pole that had been installed in 1976 at the dogleg of the golf course’s fifth hole showed degradation. Hunt died in 1985, but Rowe tracked down one of his 14 children: Stan Hunt. Continuing the Kwakiutl carving tradition, Stan and one of his five children, Jason Henry Hunt, spent two weeks at Sunnylands in 2010 restoring the pole and returned in 2012 for its rededication.

“I try to toggle directly from Sunnylands archives with things from outside to augment,” Rowe says of exhibition planning. “After I read that Herb Alpert was inspired by [First Nations] poles in Vancouver’s Stanley Park, it became a dream of mine to bring [the Hunts’ and his work] together.”

The exhibition includes totem poles by all three artists, as well as masks and wall plaques by the Hunts and paintings by Alpert.

The catalog for Reach for the Sky: Tradition + Inspiration provides more information about the Kwakiutl culture, Hunt family legacy, and Henry Hunt totem pole as well as profiles on all three artists and descriptions of works in the exhibition. Sunnylands’ Open-Air Experience tour includes a stop at the totem pole on the golf course, and shuttles to the pole will be available on some days during the exhibition. Herb Alpert and his wife, Lani Hall Alpert (of Sergio Mendes & Brasil’66 fame), perform a Jan. 27 concert at McCallum Theatre. For more information on both, visit sunnylands.org and mccallumtheatre.com. 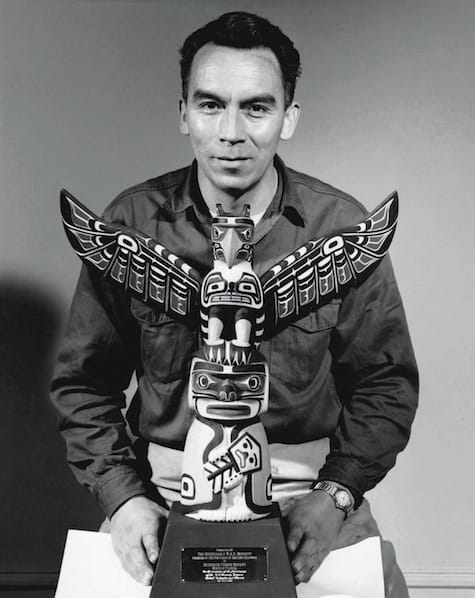 Portrait of Henry Hunt circa 1970. 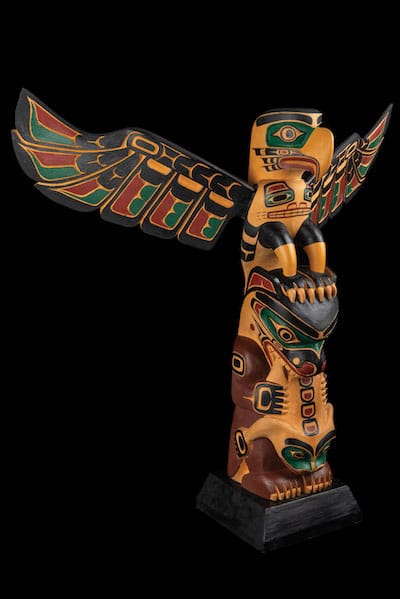 In this cedar Model Pole (1971) by Henry Hunt, a wingspread eagle sits atop a bear, cradling a frog in its mouth. The animal symbols represent Hunt family crests.

The catalog for Reach for the Sky: Tradition + Inspiration provides more information about the Kwakiutl culture, Hunt family legacy, and Henry Hunt totem pole as well as profiles on all three artists and descriptions of works in the exhibition. Sunnylands’ Open-Air Experience tour includes a stop at the totem pole on the golf course, and shuttles to the pole will be available on some days during the exhibition. Herb Alpert and his wife, Lani Hall Alpert (of Sergio Mendes & Brasil’66 fame), perform a Jan. 27 concert at McCallum Theatre. For more information on both, visit sunnylands.org and mccallumtheatre.com. 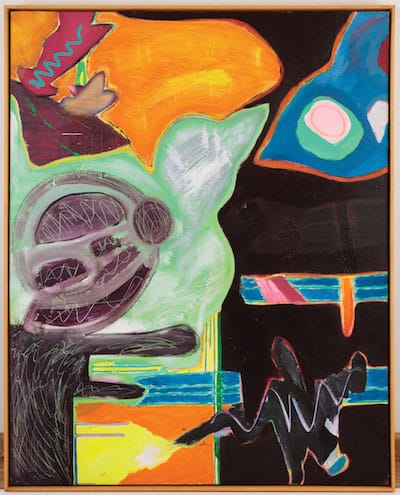 Self-Preservation (2013) with organic coffee and acrylic on canvas.

Herb Alpert
‘It’s All About Freedom of Expression’

“The [Stanley Park] sculptures triggered my creativity,” says Alpert, who has been painting for 50 years and sculpting for 40. “I started doing 12-foot totems that were symbolic, more like the indigenous people were doing.” Looking for his own voice, he transitioned to “spontaneous, jazz riff-type” sculptures.

“It’s all about freedom of expression and imagination and, above all, being truthful with your art,” he asserts.

Alpert casts abstracted totems in bronze with a black patina.

“You can disguise a piece with an interesting patina; you start giving the patina credit. It’s all about shape and form, which are much easier to see clearly in black,” he says, adding that nine of his totems stand in the gardens at Chicago’s Field Museum.

The Sunnylands exhibition also includes paintings in acrylic (Rufino Tamayo being a key inspiration) and coffee (an idea evoked by what he was drinking while planning a gift for his daughter).

When creating visual works, Alpert, as might be expected, listens to jazz. But, he notes, “I have a classical background. So when I get into a rut, I listen to Ravel: “Daphnis et Chloé” — especially the last movement.”

Rowe mentioned her idea for a joint exhibition when she saw Alpert at a show of his work at Heather James Fine Art in Palm Desert and invited him to visit Sunnylands.

“I was just overwhelmed by the property,” he says. “But that [pole by Henry Hunt] is one of the most beautiful wooden totems I have ever seen.” 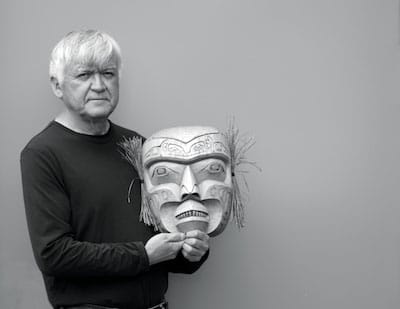 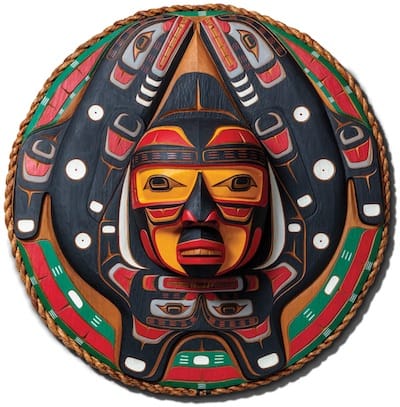 “I always wanted to carve, but I thought you had to be one of the selected few — that they would ask you to carve,” says Stan Hunt, explaining why he waited until he was 22 to follow in his father’s footsteps (two older brothers had begun carving at younger ages). He had his own painting and decorating business in Victoria when he asked his father if he could apprentice with him at Royal British Columbia Museum’s Thunderbird Park.

“I feel that, because he knew I liked to work, he thought I had the ability to learn,” he says.

Stan Hunt’s totems include one at a castle in Scotland, two in the Netherlands, and three commissioned for a 200-foot yacht. A pole of 43 feet, 10 inches stands at Canada Square in Buenos Aires, Argentina. Though he primarily carves in traditional cedar, works at Sunnylands on loan from private collectors include a bronze totem, a glass sculpture, and a mask in Forton (an acrylic co-polymer formulated for concrete products).

“My work resembles my dad’s,” he says. “Younger carvers call it ‘old school’ because they have changed drastically with unconfined lines and colors. It is the art evolving. I’ll always be traditional.”

Concerning Alpert’s improvisational totems, he says, “The sculpting that goes into them is amazing.”

As for having his own work at Sunnylands, where a pole by his father stands, he says, “It has come around full circle.”

At the top of Totem Pole (circa 2014) rests an eagle — a huge crest for the Hunt family — followed by a wolf that holds a Hawk-Man Sun who stands on a killer whale. 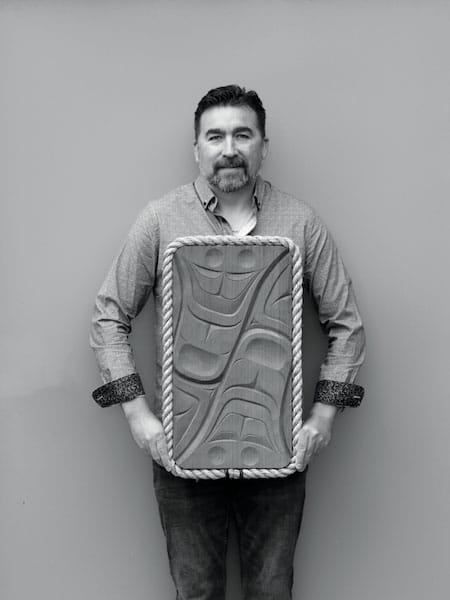 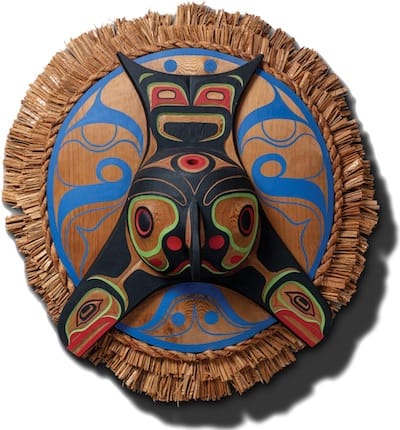 Moon Mask (2014) with a killer whale, carved from a single solid piece.

Jason Henry Hunt
‘I Could Be Carving’

“When I was a little kid, people asked, ‘What are you going to do when you grow up?’ I would say I am going to be a carver like my dad,” Jason Henry Hunt recalls. He later felt intimidated by the stature of his grandfather, father, and two uncles in Northwest Coast art, so he studied economics at college in Victoria.

One summer, he asked his dad if he could carve with him — to which the reply was, “Sure, there’s a block of wood right there.”

“Sitting in classes back at college, I thought, ‘I could be carving.’” Three weeks into the new semester, he returned to Vancouver.

“If you follow the style from Grandpa to Dad and down to me, you can see a chain,” he says. “Grandpa’s work has a traditional quality. Dad’s is similar but more refined. I explore even further — get more contemporary and experimental.

“The exhibition is a cool way to show how art and different generations influence people,” he continues. “Herb Alpert’s sculptures are directly envisioned because of totem poles like Grandpa’s. He is interpreting it in a way that enhances his artwork, whereas I look at it from a cultural standpoint.”

Years after restoration of Henry Hunt’s 30-foot totem pole at Sunnylands, Anne Rowe saw the 8-foot pole at Victoria Park in Palm Springs. Though delighted to discover it was the work of Henry Hunt, she lamented that it, too, had succumbed to the ravages of time outdoors. In fact, she discovered, it predated Walter and Leonore Annenberg’s commission by eight years — having been installed in 1968 as a gift to Palm Springs from its then-sister city of Victoria, B.C.

Rowe worked with the City of Palm Springs to coordinate restoration of the pole by Stan and Jason Henry Hunt in late 2015.

“The [adjacent] firehouse and neighborhood got involved,” Rowe recalls. “They put it on a cradle in the firehouse, and it became a community thing.” Students from the elementary school across the street were able to watch the Hunts work, and the pole was reinstalled in 2016. 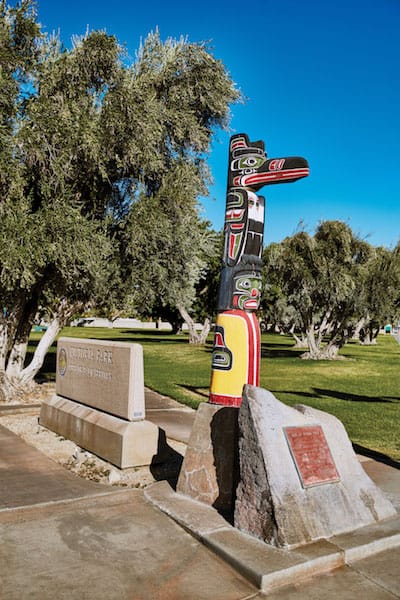