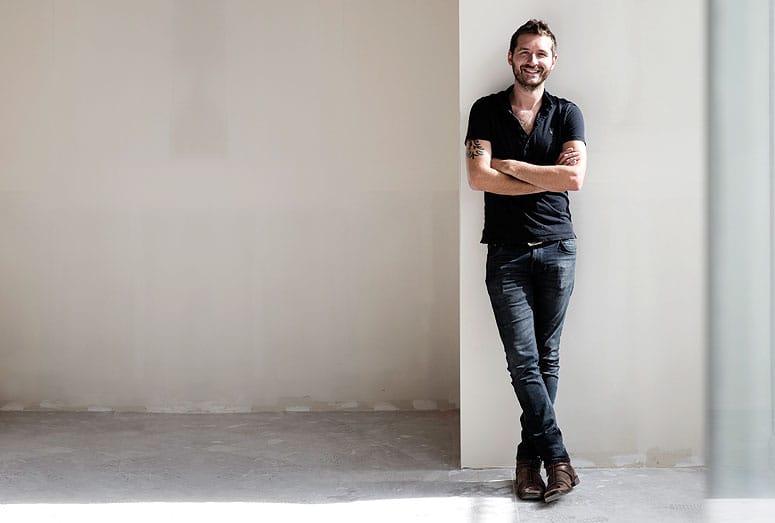 Chris Pardo came to Palm Springs looking for a vacation home and has since made it his workplace. Not the home, but Palm Springs — and several other cities in the area. The founder and principal of Chris Pardo Design: Elemental Architecture is working with established developers, such as John Wessman, and relative newcomers, including Coachella music festival promoter Goldenvoice, on dozens of projects throughout the Coachella Valley.

“I like how this community responds to architecture,” says Pardo, who has garnered appreciable notoriety for his custom homes with his signature minimalist aesthetic, inspired by Asian, Scandinavian, and midcentury modern design. “People here appreciate and understand what we’re doing, and when they’re criticizing, they have a basis for their argument.”

The architectural designer, who made his first trip here from Seattle in February 2012, needed less than a year to land on the local news. He and Peter Karpinski co-founded Arrive Palm Springs, a 32-room boutique hotel with a restaurant and retail spaces. Opening this summer in the Uptown Design District, it’s the first new hotel to break ground in almost 10 years in Palm Springs. And, with Facebook multimillionaire Ezra Callahan as an investor, it could be the first property in a regional or national hotel brand.

Pardo comes to the area with an impressive list of accolades garnered in a 10-year span since graduating with a master’s degree in architecture from the University of Washington in Seattle. He built his first homes with a classmate and eventual business partner, David Biddle. “For our thesis, we proposed to build two houses, while our classmates were working on bigger things, like hypothetical opera houses.”

They secured financing, overcame an easement issue, and built on a 25-foot-wide parcel in downtown Seattle. “The houses sold three days after they were built — for $100,000 more than the bank had estimated.” They then began fielding more jobs than they ever imagined and within three years had offices in Seattle, Wash.; Lima, Peru; and Hong Kong.

When the economy collapsed in 2008, Pardo laid off about 40 employees and eventually started opening restaurants and bars in Seattle — including a hot dog restaurant named Po Dog and an autoparts-themed sports bar called Auto Battery. As the economy began to recover, architecture clients came back. “We are now doing about 60 to 70 projects a year,” says Pardo, who employs 11 architects and an interior designer.

In Palm Springs, Pardo envisions a “gateway district” north of uptown that connects Indian Canyon and Palm Canyon drives with the Arrive hotel and restaurants — including The Reservoir restaurant and Sandfish sushi and whiskey bar — near Riviera Palm Springs.

His design also plays into what’s known as Block B in the redevelopment of the former Desert Fashion Plaza in downtown Palm Springs. Wessman Development hired Pardo to design one-story retail structures and a three-story office building. The retail design features exposed steel I-beams, COR-TEN steel, reclaimed wood, smooth stucco, and large steel overhangs. The office building will be a glass cube with metal mesh fabric around its perimeter, allowing for natural light and protection from the sun.

Wessman — who called on Pardo to design Il Corso, a new Italian restaurant he and Chef Mario Marfia own on El Paseo in Palm Desert — has also confirmed that he’s working with the architectural designer on a new 144-room hotel project in Palm Springs.

Pardo’s other projects include Hacienda Cantina & Beach Club, opening this winter at the former Cedar Creek Restaurant location in south Palm Springs. Commissioned by owner Rich Meaney, the design calls for steel and concrete block structures, an elaborate interior with Day of the Dead influences, and a pool area with bar structures and built-in cabanas.

“Housing and hotels have [Pardo’s] simple, minimal look,” he says. “I do a lot of different things with restaurant interiors. I see them more as a movie set — the background for an event. It creates a mood.”

He’s also designing Smoke Tree Supper Club, an 11-unit loft project in the Tennis Club neighborhood, and a coffee shop in the former Beachcomber space at Via Lola — all in Palm Springs — as well as custom homes in Rancho Mirage and Palm Desert, and 11 midcentury modern–style houses near the polo fields in Indio. “Most of the houses I design are LEED certified and strongly design-oriented to take advantage of the site,” he says. “They’re technology-based — solar, water, windows.”

Goldenvoice, which produces the Coachella and Stagecoach music festivals, has commissioned Pardo to design 200 to 300 permanent restrooms constructed with steel and concrete blocks.

Two years into his Palm Springs experience, Pardo has had little time for that vacation home. But the designer has no regrets. He’s at the forefront of a renaissance in the city. “It’s really exciting [in Palm Springs],” he says. “We can have a real impact here.”