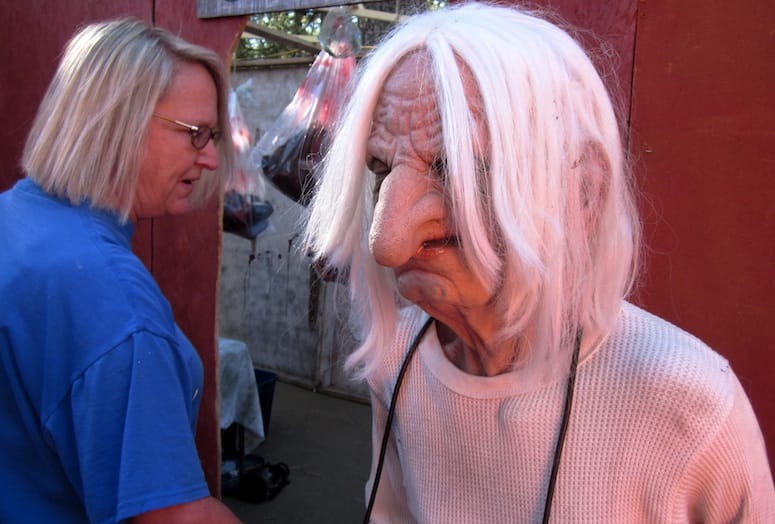 The cool night air of Idyllwild will be interrupted for a month with the presence of witches, zombies, and werewolves for the 10th annual Idyllwild Haunted Ghost Town.

The 7,200 square foot town is open to the public on Friday and Saturday nights starting this week, Oct. 4-5, located on what would normally be tennis court space in the center of town. This year’s edition has built more rooms and added more animatronics, or scary robots, that move and talk.

Without giving too much away, Wilson says the Idyllwild Haunted Ghost Town has everything to scare you including monsters, zombies, clowns and werewolves.

Outside, there’s a Haunted Trail where Bigfoot and werewolves lurk.

The ghost town will also spur a free-for-all Idyllwild Zombie Run Oct. 19, which starts in the center of town and finishes in the ghost town. On Oct. 26, there will be a Slenderman Hunt.

The overall scary experience includes smells like smoke and rotting flesh and sounds like growls and explosions.

The cost of operations isn’t cheap. Some animatronics, such as grandma and grandpa whose eyes roll and bodies rock, cost about $500 each. Even the werewolf claws, with 3-foot extenders, worn by 13-year-old Chase Vladika, a fifth season volunteer, cost about $350.

“They’re heavy, but I don’t feel the cold at night,” says Vladika.

Wilson is happy to see youngsters like Vladika, and her five children volunteer for the Idyllwild Haunted Ghost Town each year.

“It’s usually the first time they’ve volunteered for an organization, but it puts them on the right track for life,” says Wilson, whose father-in-law, Roy Wilson, was a Riverside County supervisor in Palm Springs and the Coachella Valley from 1994 to 2009.