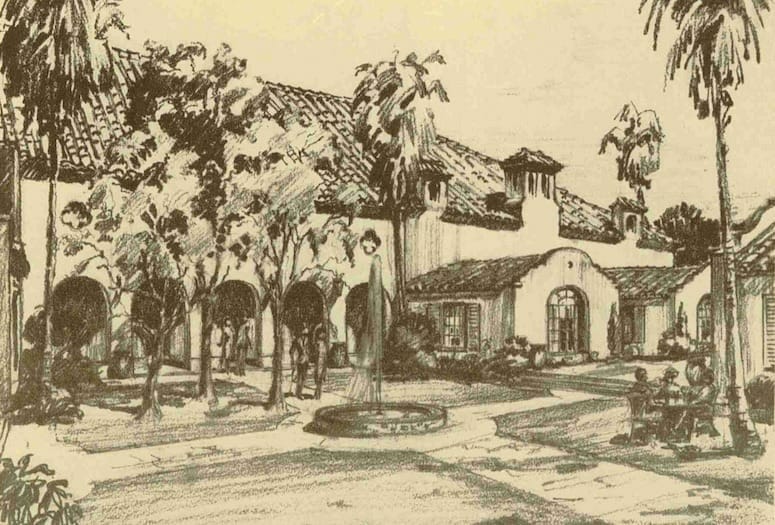 An architectural drawing of the Plaza Theatre by Harry J. Williams from 1935. It would open Dec. 12, 1936 with the screening of the film, Camille.
RENDERING COURTESY PALM SPRINGS HISTORICAL SOCIETY

Palm Springs High School students were set to perform at the Plaza Theater in February 1948, according to the Desert Sun. “Featuring tantalizing hula dancers, singing mutineers, and lovely mermaids… (in a) comic operatta about the gay adventures of a wealthy young college girl and her friends who cruise to the South Sea Isle of Cocos, because life has become rather dull at school. The gold detecting invention of Professor Molecule causes no end of laughs and adventure when it uncovers a band of mutineers who have been sleeping for 200 years. While the party tries to stall the pirates off about their lost treasure, the chaperone of the group decides to entertain them by teaching some the graceful ballet. The results must be seen to be appreciated.”

The “results” were supported by an array of teachers from the school that would be the envy of any curriculum today: “The orchestra is directed by Gustave Patzner. Stage scenery and sets have been constructed under the supervision of Andrew Lester and C.S. Collins, art and woodshop teachers. John Schwendiman, radio teacher, is head of the publicity; and Ralph Remy, commercial teacher, has charge of the ticket sales.” 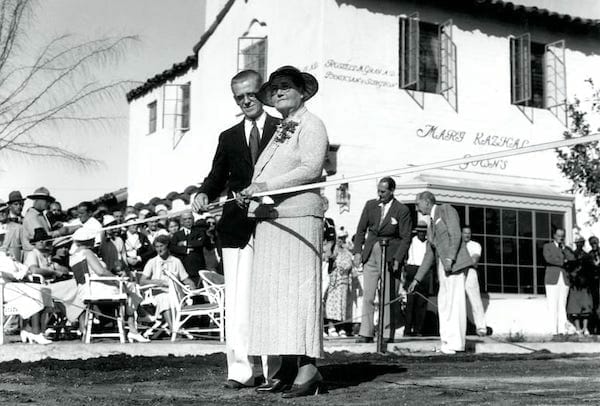 Certainly unusual, the school production was just one of many offerings allowed by the very existence of the Plaza Theater. That a tiny desert town would have a first-class theater was entirely due to Julia Carnell of Dayton, Ohio. Fabulously wealthy, Carnell began the Plaza development during the height of the Depression to augment shopping and entertainment possibilities during her winter stay at the Desert Inn.

Carnell purchased a lovely site just south of the Desert Inn, effectively moving the center of town southward. In 1935, she commissioned Harry J. Williams, her Ohio architect, to design the first mixed-use complex in California in a Spanish Colonial Revival Style. Carnell allocated the astronomical sum of $1 million dollars to the project at a time when times were tough for most. The project plans included various shops, bungalows, chauffeurs’ quarters, an underground garage for the cars of wealthy winter visitors. Importantly, the plans also included a movie theater with over 800 seats.

In the middle of the 1930s, Palm Springs had a population of barely 1,000 people. It would swell to four times that in the winter months, and the Palm Springs News recorded in 1937 that “400 to 500 intrepid souls brave the terrific heat of midsummer.” Williams and Carnell were extremely ambitious having planned a theater that could practically accommodate the whole town.

Movie houses were a place of refuge for the suffering, unemployed country during the Depression. In big cities everywhere, movie theaters were earning the designation of “palace.” Their lavish embellishments and gilded decorations, made outrageous given the economic times, were dreamy and fantastical. 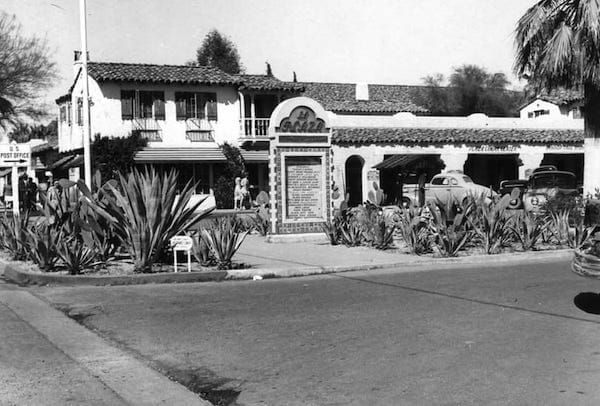 La Plaza facing South Palm Canyon Drive.
In Palm Springs, the Plaza would instead consider the times and environs. Spanish Colonial architecture was ubiquitous in Southern California and suited to the desert heat. Architect Williams wanted the Plaza to be without pretense, open and graceful. It would include a theater, but it would be a distinctly desert version of a movie palace.

Williams said the lines should be horizontal and inviting, and not detract from the million-year-old mountains that provided a backdrop more magnificent than any architecture or proscenium. Realtor Robert Ransom developed the project built by contractor W.O. Warner. The exterior appointments were created by landscape architect William C. Munchoff.

In pointed contrast to the ostentatious movie palaces of other locales, the Plaza Theater’s interior was appropriately modest, yet distinctive and interesting. Protruding from the sides of the hall, a charming Spanish village sprouted up, making those seated below feel as if they were in a central square of centuries past. Arching over the seats was a ceiling of deep blue punctuated by tiny, twinkling lights, as if the venue were open to the star-splashed heavens.

Williams said the lines should be horizontal and inviting, and not detract from the million-year-old mountains that provided a backdrop more magnificent than any architecture or proscenium. Realtor Robert Ransom developed the project built by contractor W.O. Warner. The exterior appointments were created by landscape architect William C. Munchoff.

In pointed contrast to the ostentatious movie palaces of other locales, the Plaza Theater’s interior was appropriately modest, yet distinctive and interesting. Protruding from the sides of the hall, a charming Spanish village sprouted up, making those seated below feel as if they were in a central square of centuries past. Arching over the seats was a ceiling of deep blue punctuated by tiny, twinkling lights, as if the venue were open to the star-splashed heavens. 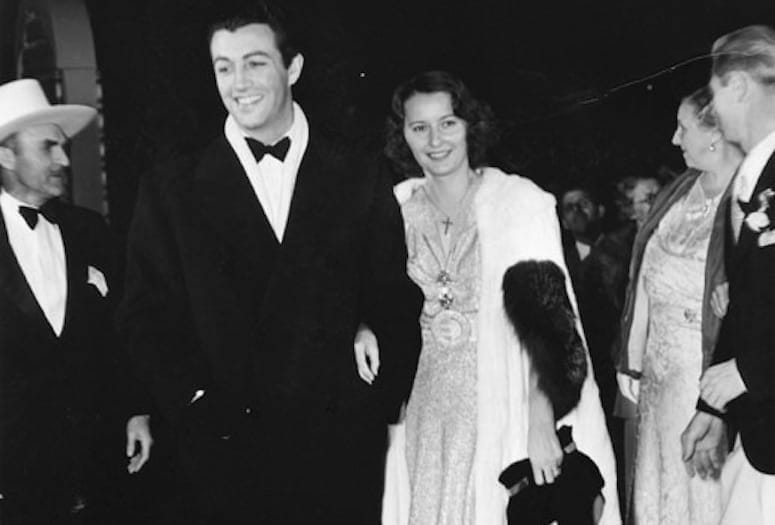 The theater opened before the rest of the Plaza was completed. Described in a Desert Sun article as having 850 comfortable seats with air conditioning to keep pure fresh air circulating at the proper temperature throughout the large auditorium, it was truly a modern marvel. Engineers from Electric Research Inc installed the new, state of the art, “Orthophonic” sound system.

The premiere on Dec. 12, 1936 featured the George Cukor film Camille. Star Robert Taylor arrived to much fanfare with his intended wife, Barbara Stanwyck. Reclusive Greta Garbo, of the title role, was reported to have slipped into the back of the theater after the lights went down to observe the opening night crowd.

Just a month later, Earl Strebe, the proprietor to whom Carnell had leased the building, announced he was struggling to supply first-rate pictures for both his Plaza and Palm Springs theaters. “We must have seven top-notch pictures a week for both theatres. We change program four times weekly at the Palm Springs Theatre and three times at the Plaza. It is almost impossible to get sufficient attendance at each theatre necessary to show first-class pictures and keep both theaters open.” 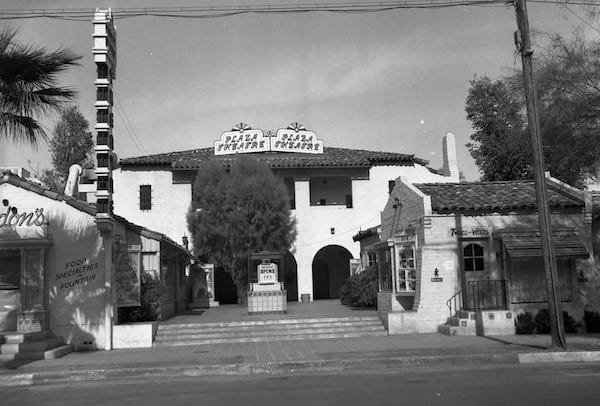 In January 1978, the groundwork was laid to create the Historic Site Preservation Board to protect buildings like the 1936 La Plaza Theatre.
First-run movies changed three times per week were augmented by live performances, community events, kiddie shows, gala revues, the high school production and even the ballet. Not just any ballet, but the Ballet Russe du Monte Carlo. Women in evening gowns and men in tuxedos graced the performances. Klieg lights traced the sky over the village and a crowd of spectators at the theater entrance created the feeling of an opening night on Broadway or in Hollywood.

Philip Boyd, the first mayor of Palm Springs, remarking about the offerings at the Plaza said the “community of Palm Springs is to be congratulated upon bringing to this region not only the ballet but the best things in music….”

While there will be no hula dancers, mutineers or mermaids this week, the Plaza Theater is again offering the best things in music with the Oasis Music Festival, May 11-15. Restoring the vibrant cultural scene of earlier decades, Oasis will doubtless become the next big desert deal, like the International Film Festival, Modernism Week and Coachella before it. The Plaza Theater will be once again alive with world-class musical performers of all genres, like Oasis Music Festival headliner Christian McBride, an 8-time Grammy winner who will perform May 15.

• READ NEXT: The Flusters Have Saved Their First Live Show in the Desert in 2 Years for Oasis Music Fest.