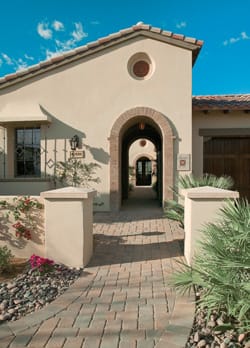 Architect Phil Pekarek had to brush up on his history before designing one of La Quinta’s newest luxury communities. Now he can speak at length about how the Moors continually conquered Spain (first in 711) and in so doing distinguished Al-Andalus (most of the Iberian Peninsula) from the rest of the country.

With other principal planners for Andalusia at Coral Mountain, Pekarek gained an appreciation of Moorish design during two scouting trips to the southern tip of Spain — in March 2004 and September 2006.

“We didn’t want to do Spanish [architecture] because it’s so heavily overused,” he says. “But being in the character of where we live in California, we are Spanish. We wanted to do something that was a little bit different.” They chose what he calls “a more historic theme” and decided to visit Andalusia.

“The first trip was to look at the region, architecture, culture, lifestyle — to touch it, see it, smell it, and feel it so we would have a better idea how to carry this out,” explains Grady Sparks, president of Drummond Real Estate, which is developing Andalusia at Coral Mountain.

Guided by a Sevillan architect, the group visited 200-year-old houses, as well as 21st century master-planned communities with golf courses.

“Have they gone into a new design era? No, they are carrying on history,” Pekarek reports. “New custom homes are all about the old haciendas, and their lifestyle is all about courtyards.”

The San Juan Capistrano-based architect says the Moors brought courtyards and water features to southern Spain. Both elements play heavily into the desert’s Andalusia. California fountains are typically all about splashing, Pekarek says, whereas Andalusian fountains are passive — and thus quieter. One such fountain in a model home entry courtyard also exhibits the influence of the Catholics who took over the rule of Andalusia in 1492.

“Catholics were all about lions, because it represented the king,” Pekarek says, explaining the multiple lion-head spouts. The Catholics also introduced copper and wood beams, as used in the ceiling of another model with a shield pattern. “[The tile patterns] all mean different things. We used one pattern that looks like a little tree and represents the tree of life. Everybody [in Andalusia, Spain] has a piece of that tile on the exterior of their house somewhere,” Pekarek says. “It brings longevity and prosperity.”

Although the La Quinta houses feature modern amenities such as state-of-the-art appliances, the design team has retained the Old World feeling through the treatment of materials. For example, tumbled brick is used for walk- and driveways and stones and brick are “overgrouted” (grout is rubbed over the entire surface to remove shine). Other details include textured walls and ceilings; cedar garage doors with iron straps, nail heads, and rosettes; brick and iron chimney caps (one designed for each of the 18 elevations) that required five trips to the roof by different tradesmen; and scalloped, hand-sawn rafter tails. The interior color palette revolves around deep reds, terra cottas, browns, greens, and golds. Furnishings in model homes lean toward the heavy side, with ornate light fixtures and mirrors and thick wood tables.

The second trip to Spain focused on the architectural and interior design for the racquet club and included visits to several palaces — most importantly The Alhambra, a ninth century fortress/citadel-turned-palace sitting on a rocky hilltop in Granada.

“When we saw the palace, we saw that’s how we wanted to implement the clubhouse,” Pekarek says. “It looks like a city, not just one building.” Like The Alhambra, the La Quinta structure will feature varying roof heights, “fortress” walls, and turrets. “We are building it over a bank so we can have stone walls come out of the hillside to ‘hold up the palace.’ We wanted this complex to take on a character of real history.” To that end, the design team is creating a history wall to tell the Andalusian story. “I was really trying to get inspired by the different wall textures and the artwork and murals,” she says, “and trying to bring some of that back so we could recapture the history of Spain.

“I was fortunate to have two local tour guides that took me to many different shops that were tucked away in back alleys and nooks and crannies that I would have never found,” McGuire says.

Among her antique shop purchases were an oil painting of a flamenco dancer and two bullfighting scenes; a dozen smaller paintings; three large tapestries, including one showing a member of royalty sitting in a window at The Alhambra looking out over the city and another showing the making of wine; antique storage trunks; pottery; candelabras; and a carved console table for the racquet club’s foyer.

“I also found a source to make custom chandeliers and am having four large lanterns made that will be mounted to the beams in the exterior breezeway,” McGuire says.
Back in California, she located sources for Spanish-style furnishings with a Gothic influence (Visigoths also played a role in ancient Andalusia). Custom designs include iron scrollwork, tumbled stone and hammered copper tables, carved stone mantels and surrounds, and hand-painted umbrellas with Moorish motifs. The main dining room will feature a mural of Don Quixote in tumbled mosaic limestone. McGuire also happened upon a matador’s outfit from the 1920s that she plans to mount for the foyer.

Sourcing came a little harder for Pekarek, who created tile patterns and then found only one tile maker — in Oregon — that could provide the detail and precision of
Moorish tiles. Each 4×4 tile costs $25, and Andalusia expects to order 40,000 tiles of different sizes per year until build-out in eight to 10 years. Pekarek tracked down a hand-painted tile muralist — Jiji Lee of Faux Real Finishes — closer to home, in Palm Springs. And he provided some of the thousands of photographs the design team took in Spain to Palm Springs Welding to replicate Andalusian ironwork.

To carry the theme beyond architecture and décor, Andalusia at Coral Mountain plans to promote Spanish cuisine and wines on the racquet club restaurant menu and host events with flamenco music for entertainment.

He will admit only that the sculpture by Northern California sculptor Patricia Borum is “expensive.” But he is willing to shave something from his bottom line to relay the message that his new community parallels the building of castles and dream homes in Andalusia, Spain, by those who reaped the rewards of their conquests.

“[He] is willing to go to the effort and try to tell a story,” Pekarek says — a story clearly rooted in history.