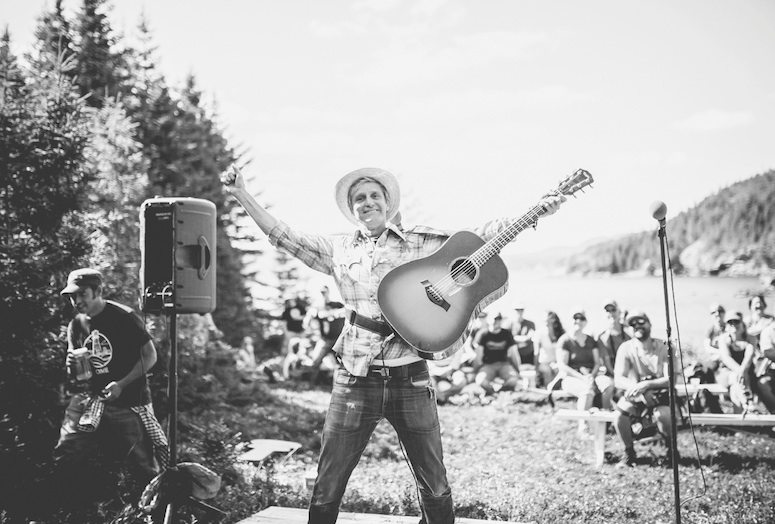 Best known for co-writing Jewel’s 1996 megahit, You Were Meant for Me, singer-songwriter Steve Poltz has forged his own path in pursuit of a solo career that shows no sign of letting up.

But don’t expect his bio to read like a roller-coaster logline to VH1’s Behind the Music. Poltz has avoided the dramatic highs and lows so common in musicians’ lives and maintains a steady pace of album releases and year-round touring.

He returns to his Coachella Valley roots (he grew up in Palm Springs) Nov. 7, kicking off the Free First Fridays at The Galen at Palm Springs Art Museum in Palm Desert with a live show. The museum will also screen the documentary, Running Wild: The Life of Dayton O. Hyde, featuring a score composed by Poltz.

Watch any of Poltz’s folksy performances on YouTube and you get the sense that he’s mastered the art of playing by his own rules. His brand of quirky songs and sharp storytelling places him in a singer-songwriter pack all its own. Particularly noteworthy is his genuine embrace of a modern-day troubadour’s approach, taking his music to the road and connecting with everyday people. Singer-songwriter Steve Poltz’s quirky songs and sharp storytelling places him in a pack all its own.

“It’s been really neat because I’ve never been huge enough where I’ve had like a posse or needed security,” Poltz says. “I’ve always been kind of a man of the people. I like the Willie Nelson school, where you do it till you’re dead. Willie meets everyone outside his bus and will sign anything. I love that.”

The Canada native moved to Palm Springs in fourth grade, where he resided until graduating from high school. He had no shortage of celebrity encounters during the desert glory days of the ’60s and ’70s.

“We used to go trick-or-treating at Liberace’s house,” Poltz says. “I met Elvis Presley when I was a kid, and Bob Hope went to our church, where I was an altar boy. Bob would come and take Communion, and I would hold the plate under his mouth so that the host wouldn’t hit the ground. He would come up and tip the altar boys 5 bucks, like we were busboys or waiters.”

Poltz says he met Elvis through a neighbor. “This guy lived across the street from us, and he was the manager of the Palm Springs airport,” he says. “He would tell us when movie stars were coming and let us meet them. One day he said, ‘Hey, Elvis Presley is landing today.’ And so he let us ride our bikes down the tarmac to where Elvis’ plane landed. We all ran up and greeted him. He gave us his autograph, picked me up in the air and swung me around, and hugged my sister, and I think I yelled out something like ‘You can have her, Elvis!’ Poltz lets out a mischievous chuckle. “It was one of my fondest memories, and it really affected me because he was so nice.” Music icons like Elvis clearly had an impact on Poltz, but he too has made an impression on an eclectic mix of celebrities.

“Weird Al Yankovic used to come see us [Poltz’ band, the Rugburns] all the time at the Troubadour in Los Angeles,” Poltz says. “He loved this song of mine called ‘Dick’s Automotive,’ and he loved coming to our shows — I think because we were so wild. He [later wrote] a song called ‘Albuquerque.’ If you listen to our song and then listen to ‘Albuquerque,’ it’s like he wrote it in the style of ‘Dick’s Automotive.’”

Poltz has another big fan in Steve Wozniak, who founded Apple with Steve Jobs. “He’s showed up to my shows in London. He had me play at his 60th birthday at The Tech Museum of Innovation in San Jose. When you hang out with that guy, it’s like hanging out with the Beatles, because he’s telling you the story of starting Apple computers with Steve Jobs and it’s just one of the most amazing things. He saw me once at Pappy & Harriet’s and brought me a freshly minted uncut sheet of $2 bills. I said, ‘How’d you get those?’ and he was like, ‘I have connections.’” Steve Poltz performs at a show.

Poltz’s good stories are endless, like this one from his current tour. “I did a show in Arkansas last night, and I sang ‘You Were Meant for Me,’ the song I wrote with Jewel, and at the end of the song this woman comes up and starts screaming, ‘I hate that song! I hate that song! Jewel might be hot, but I hate that song, and I hate you for writing it with her!’ And I was just smiling at her, thinking to myself, ‘Wow, do not engage.’ So I just went on to the next song. Every once in a while I just get sucked into a crazy vortex.”

You’d think it would drive Poltz nuts every time someone asked him about Jewel, but he says it doesn’t.

“No — because I have such a story of my own now,” he says. “There are so many things, like what we were just talking about. Back in the day, when the song was a huge hit and I was in the video and it was being banged to death on MTV, I was like, ‘God, can we talk about anything else?’ But that song made me a lot of money and allowed me to do what I’m doing. It was luck and timing. It was cool to be a part of that.”