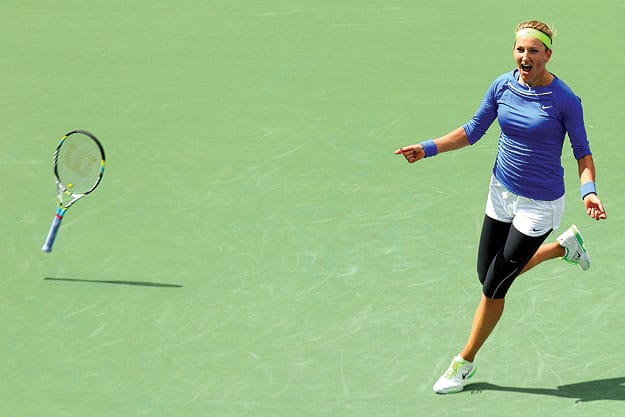 A few hours before world No. 1 Victoria Azarenka dominated the talented 19-year-old American Sloane Stephens in the semifinals of the 2013 Australian Open, she was caught on camera dancing an improvised 21st century hustle with friend and cohort musician Redfoo. Sporting a shock of crazy hair and oversized glasses, the LMFAO frontman, Party Rock Crew leader, and son of Barry Gordy is a regular presence at Azarenka’s big matches.

That’s how “Vika” rolls. She works hard and she plays hard.

The Belarus native went on to beat China’s Li Na at the Australian Open finals in an injury-laden match that revealed Azarenka’s competitive drive and composure under pressure, as her opponent took two time-outs for a sprained ankle and a head-thumping fall. At the awards ceremony, Azarenka thanked her team and the Party Rock Crew. Earlier in the tournament, as images of her rapper pal appeared on TV screens worldwide, on-air commentators noted that Azarenka’s improved Grand Slam record seemed to coincide with the addition of Redfoo and crew in her camp. The word was that the celebration after the Australian Open was noisy and long. The next day, after only four hours of sleep, she confidently told the media that she can “make it happen” at any major.

Azarenka credits much of her recent success to the training and staffing adjustments she made in 2011, including her coach Sam Sumyk and physical trainer Mike Guevara. Her off-season work includes a lot of conditioning. During tournament play, she says, it’s more “quality than quantity.”

This month, Azarenka returns to Indian Wells Tennis Garden as defending champion of BNP Paribas Open at Indian Wells. “This event is amazing,” she says of the March tournament, the largest in the world after the Grand Slams (Australian Open, U.S. Open, French Open, and Wimbledon). “It’s one of those places you really want to win.”

The feisty star recalls last year’s tournament with fondness. “I think holding that trophy, coming also from winning the Australian Open, was great,” she says. “My run was amazing, and that win against Maria [Sharapova] was something special.”

Azarenka says she enjoys the calm of the desert and the family atmosphere. “I thought it was very quiet,” she says, adding the disclaimer: “I am 23.”

Unlike many other professional tennis players, she does not hit the greens while in the Coachella Valley. “Funnily, I don’t play golf,” she says. “But there are great outlets, and I am not going to lie to you — I go shopping, a lot!”

“Women’s tennis is deep nowadays,” Azarenka says. “There are a lot of up-and-coming young players. Every player is a threat. You have to go step by step, round by round. It’s tough to make it through.”

Azarenka also respects the longevity of seasoned players like Serena Williams and Roger Federer, who are older than 30. “I definitely think those two are, if not at their peak, close to it, and that is something really amazing,” she says. “But I am still very young and have many years ahead of me.”