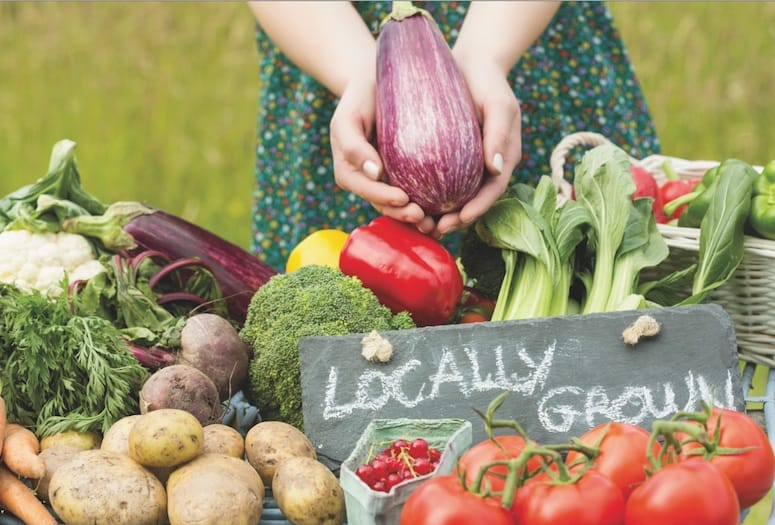 Nobody wants the finest, freshest produce more than me, a first-time mom who tries to give my 1-year-old the best of everything.

Buying local is the obvious choice, particularly since agriculture is deeply rooted in this region’s culture and economy. Just east of Indio are thousands of acres of rich farmland, forming one of the most productive agricultural regions in California and producing about $600 million per year in fruits and veggies.

The agricultural districts that sit astride the Arizona/California border and are fed by the Colorado River are known as “winter salad bowls,” because farmers raise table grapes, lettuces, bell peppers, broccoli, and citrus year-round, even while other parts of the country are draped in frost and snow. Here the citrus trees hang heavy with fat, round grapefruit. Artichoke plants shoot tall thistles under cloudless blue skies. Palm trees rain juicy dates. So at a time when “local food” is the buzzword du jour, with everyone from restaurant owners to casual home cooks waving the locavore banner, our desert seems particularly ripe for local fare.

However, making the connection between food producers and consumers can be a challenge.

Every week, Bradd Bennick, the executive chef at La Quinta Country Club, drives his pickup truck around local farms, sourcing the food for his menu.

“I spent 14 years in San Francisco, and there were always farmers coming to the back door, trying to sell their produce,” he says. “That just doesn’t exist out here. I can see the farms, and I know what’s out there. But it’s not readily available unless I physically get it myself.”

The biggest part of the problem is that there’s no food hub in place to bridge the gap between our farms and dinner plates, says Angela Janus, executive director of ShareKitchen, a shared commercial kitchen incubator for small food businesses. After completing a yearlong feasibility study into the Coachella Valley’s food system, Janus is trying to create that infrastructure — the plans are drawn; she just needs investors. She also recently secured a USDA grant to develop branding for homegrown foods, which will help Coachella Valley consumers identify local food products on store shelves.

The bulk of our local produce is immediately packaged and transported to distribution centers in other parts of Southern California. Then some of it makes its way back to grocery stores in the valley. “It’s a very complex system, even though it seems like it should be simple,” says Mike Aiton, director of marketing for Prime Time produce in Coachella.

At La Spiga Ristorante Italiano in Palm Desert, owners Vince and Connie Cultraro found that planting an on-site organic garden was the most efficient way to get fresh produce into the kitchen. Their persimmons, pomegranates, figs, apricots, herbs, chard, and citrus can be found in every dish, from appetizer to dessert.

“We firmly believe in knowing where our food comes from,” says Connie Cultraro.

Our food tells a story, and it’s one I want my child to know.

Sure, I can bring my son into the kitchen and show him the glory of cauliflower florets, massaged in garlic and oil and roasted until they mellow into creamy, buttery bites. But I can’t give him a homegrown vegetable unless I buy it. There’s no crop forgiving enough for my woefully inadequate gardening skills, so I must leave that to the professionals. Peaches also take their place next to the valley’s famed citrus.

Luckily, there are options for buying local produce that bear soil instead of stickers. Small stands like Madison Street Produce and L&G Desert Store offer up slender green beans, crisp bicolored corn, and watermelon that tastes like candy. Their goods are almost always picked daily, sometimes still warm from the sunshine.

There’s also the thrice-weekly Certified Farmers’ Market, which boasts California-grown fruits and vegetables. Some of the farmers might not necessarily grow within the Coachella Valley, but they’re close, hailing from nearby places like Hemet and Temecula.

Lately I’ve been wandering around the farmers’ market, mentally meal-planning for the week as I load my canvas bags with golden beets, peppery piles of arugula, chubby heirloom tomatoes, and cucumbers ready for a quick pickle. Every week I also find something unexpected, like finger limes — tiny citrus with pearl-shaped pulp that bursts forth like tart caviar — or plump, purple mulberries. It often feels like I’ve uncovered buried treasure.

It might actually be better than treasure. Today I gave my son a local peach, and when I sliced into it, the flesh was yielding and golden. As peach juice dribbled down my child’s chin, he squealed with delight.

This food was fresh. It was local. And it was simply delicious. Get Some Local Food

Find farm-fresh produce at some of these markets, restaurants, and produce stands

Madison Street Produce, a roadside stand where all the produce is picked fresh from nearby farms daily. 47306 Madison St., Indio.