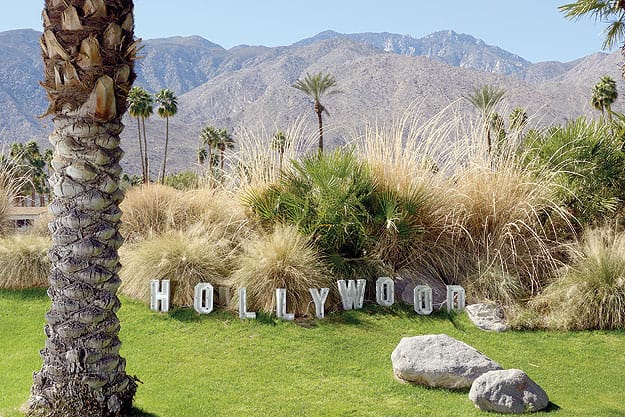 The San Jacinto Mountains cast an early shadow over The Canyons neighborhood of south Palm Springs. As the sun moves from high to low, the view from Jeff Kerns’ golf course house — framed by floor-to-ceiling windows and dramatic 12-foot-tall curtains — reveals the serrated edges of the slopes before darkness eclipses the daylight glow. “There is something about that mountain that’s very interesting to me,” he says. “Just being close to it — this view is why I wanted this house.”

Kerns knows a compelling image when he sees it. Inside the house, he exhibits a striking collection of contemporary art that mixes iconic (Keith Haring), important (Mike Kelley, Richard Serra, and Tim Hawkinson), and rising talents (Sean Duffy and Rodney McMillian) and objects and images ranging from a painted bear (Richard Jackson) to electric chairs (Andy Warhol) to a bathtub boat (Wieki Somers). Visitors will even find originals by Kerns, including his Hollywood sign and a painting that riffs on a work by Ed Ruscha.

Kerns has worked for decades as a creative director, art director, and designer for hundreds of Hollywood movie posters, including Titanic, The Doors, Fried Green Tomatoes, and The Bodyguard. Now semi-retired, he consults on new campaigns, including Oblivion and The Great Gatsby.

Kerns attended Los Angeles’ prestigious Chouinard Art Institute, which became California Institute of the Arts (CalArts), and then self-published The First X-rated Coloring Book. Soon, he was working at a Hollywood ad agency and designing movie posters. “I was never trained for it, but because of my background I was able to bring another idea or realm into movie marketing — which was fine art.”

He kept his 1950s Hollywood Hills home, with its celebrity neighbors, and remains close to the film industry. However, he escapes to Palm Springs on weekends. “I love the hot air out here,” Kerns says. “It’s like a hair dryer, and it smells clean. And I like the desert’s healing qualities — mentally and physically and spiritually.”

Kerns, who has frequented Palm Springs for 25 years, purchased a three-bedroom, 3,450-square-foot house in the relatively wind-free south Palm Springs neighborhood about six years ago. It backs up to the 13th fairway of the Indian Canyons Golf Resort North Course, offering open green space and a gloriously unobstructed view of the San Jacintos.

The low-slung, post-and-beam, ranch-style house dates to 1971. It is one of the speculative homes that architect and real estate developer Stan Stackley built along Caliente Drive. Stackley positioned the homes’ garage doors perpendicular to the street, creating a front parking court — his design signature.

Transforming the property into a light, open showcase for his art collection required a total redo. “The previous owner’s early-’80s renovations had the whole house covered in smoked mirrors and wall-to-wall kelly green carpeting and linoleum floors and banana-frond wallpaper,” Kerns says. “All the windows had bronze glass with bronze aluminum frames under black aluminum screens to keep it dark and cooler inside. You couldn’t even open the sliding windows, let alone see the views. And all the mirrors just reflected the darkness.”

Kerns expanded the living room’s glass doors to create 12-foot sliders opening to the pool and back yard. He replaced the popcorn ceilings, formed pyramid recesses that followed the roofline, and installed rooftop solar panels.

The expansion, which included eliminating walls, created larger spaces for the living room, master bathroom, master bedroom, and kitchen. To maximize the interior’s new streams of sunlight, he replaced the green carpet with speckled white terrazzo and amber bamboo flooring, and bathed the walls in white.

“Natural light is important to me,” he says. “Light and space are the most valuable things. They’re like gold. They’re luxury items I can’t live without.”

Kerns removed the blinding white cement that covered most of the back yard, as well as a 35-foot orange tree that had blocked the view. In their place, he planted grass, deer weed, pussy willows, and six tall medjool date palms. Using foliage and earth, he constructed a natural berm for privacy from the golf course. He also nestled a mini neon version of the famous Hollywood sign into the greenery. Three outdoor lounge areas feature Henry Hall teak couches and chairs, and the back yard serves as the oasis of Kerns’ dreams.

“That’s what Palm Springs is about — the outdoors,” he says. “The back yard is my favorite space. I live in the swimming pool, reading books in the water, spending hours submerged. When I entertain small groups of friends, I barbecue, and we spend the entire time in the back yard.”

The house offers plenty to see from the front, as well. When opening the 8-foot-tall glass front door of the otherwise unassuming gray-green house, an assortment of original artworks greets you in the bright living room. To the immediate right of the front door, a trompe l’oeil-painted motorcycle by L.A. artist Sean Duffy rests on its kickstand. Overhead, Duffy’s 10-foot mobile dangles, holding globes fashioned from famous record album covers.

By the wall of glass leading to the back yard, a white-and-black bear sculpture by Richard Jackson stands 8 feet tall with a smile on its face. The static contents of a can of paint “empty” into the bear’s head and filter out through a beer bottle at its groin. Next to the urinating beast sits designer Eero Aarnio’s 1966 Ball Chair. On the wall above looms a massive stained carpet rescued from a flophouse — the first Rodney McMillian “carpet painting” sold in the United States.

“I like contemporary art,” says Kerns, who travels to major fairs like New York’s Armory Show and Art Basel Miami Beach. “It’s of my moment. I can understand and comprehend this art. It has meaning to me.

“Sometimes the reason I buy a piece is emotional, sometimes it’s spiritual, but it’s never financial,” he adds. “It’s never purely an investment. The purpose of art is to redefine itself, and therefore redefine what is beautiful.”

Kerns has an eye for finding artists before they become known. “I bought a Jean-Michel Basquiat painting before anyone knew who he was, and it cost me almost a third of my annual income,” he says. “At the time, my friends thought I was crazy. All I heard was that it was ugly, that anyone could do that. If anyone could, they would. But they didn’t. The artist did. And it’s original.”

More art populates the two guestrooms: A five-foot smiling flower pillow by Takashi Murakami, a small drawing by Haring, and a deathmask-like photograph above the guest toilet of Warhol with eyes shut.

A lifesize, lacquered red cedar and oak rowboat bathtub punctuates the master bath. Above the fully functioning Bathboat (one of 30 designed by Wieki Somers) is a 2-foot, hand-painted plaster figure of a diver — a display mannequin from a New York pharmacy. Overlooking Kerns’ bedroom is, appropriately, a wall-size movie poster of the 1962 Stanley Kubrick film Lolita.

“I have found it’s imperative that I live with art,” Kerns says. “I surround myself with it, knowing that it is good for me. … Ultimately, when it all burns to the ground and someone goes and digs it up, they’ll look at a fresco or a sculpture, and it’s priceless,” he says. “It’s more valuable than jewelry, than real estate, than vintage cars, than stock portfolios — that all means nothing in the end. But cave paintings mean something. Pompeii means something. Michelangelo’s David means something. It’s the soul. It’s proof of our history as humans. That’s what art means to me — it is our spiritual core and essence of our humanity, and it’s all that’s left behind. Art is what defines our culture.”