Palm Springs - auto collectors | Home Is Where The Car Is 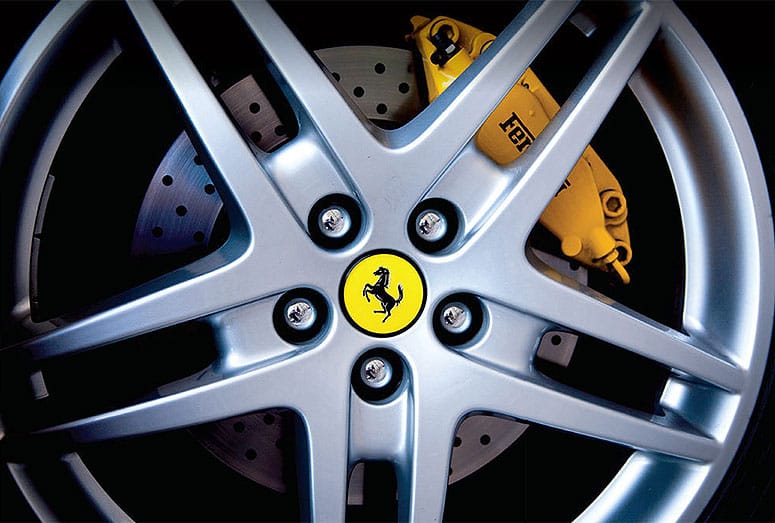 Move over, golf. With all due respect, there’s another hobby in town — one equally hallowed with a rich history and legacy of excellence. But this one ups the ante with horsepower, glistening chrome, long lean lines, leather seats, and more custom options than you can swing your sticks at.

Here in the valley, flamboyant cars reflect our offbeat culture. The climate is right and the pace is mellow enough for cruising down Highway 111 with an arm cocked out the window and the mountains cheering you on. Even Frank, Sammy, and Dean maintained their own specific automobiles purchased for just this sort of balmy desert drive. (Ol’ Blue Eyes steered plenty of lavishly cool cars, including the Continental Mark II and Cadillac Eldorado Brougham, as well as a Ghia L6.4.) The pleasure cruise is alive and well in the desert.

From north Desert Hot Springs to east Indio you’ll meet collectors who appreciate cars like fine sculpture. Just to peek into the garage and see their babies polished to a shine and waiting to roar gives these auto aficianados immeasurable satisfaction. From the faint scent of its beloved interior and the familiar give of the seat to the grip of the wheel and unmistakable growl of the motor, there’s no greater comfort and joy. Maybe man’s best friend is actually made of fiberglass and steel.

Rotating out of a warehouse, the 14 cars in this collection take turns going for a spin. "My parents thought I was crazy," says Linsky of a favorite car purchase: A 1973 BMW 2002 tii, brand new off the showroom floor. "For the money, I could have gotten a Cadillac. Instead, I got a stick shift, crank windows, and no AC! But it had a very unique feeling, different from the American cars my family were driving. It was a little oddball even then."

Linsky loved the coupe’s flawless visibility, small bumper, and winky round taillights. Over the course of time, the car was swapped out for another and another. It was only once Linsky moved to Palm Springs in 1989 and took up collecting that he was able to secure an exact duplicate of the fun little "Inka Orange" Beemer that started his love affair with exotic automobiles.

His collection spans 1960 to 1997 and includes three ’60s and ’70s Jaguars, a 1983 Porsche, a 1967 Corvette roadster and a 1971 Mustang Mach 1, "a gentleman’s muscle car." The home he built on two lots 11 years ago features a roundabout drive and a garage for four. The others bunk up at a warehouse near the airport. "A car is a home that goes with you wherever you go," Linsky says. "I carry it with me whether it’s a sports car or in a ‘saloon,’ as the British call a sedan."

Such is the longest-standing member of Linsky’s collection: A 1965 Silver Cloud III Rolls Royce. Not one for major redos, Linsky tracks down ready-to-go specimens like this posh silver giant. It speaks to a certain style of luxury and rides like a club chair. Glamorized in the Grey Poupon commercials, the Silver Cloud was manufactured from 1955 to 1966. Linsky’s features a sunroof, air-conditioning, and the finest leathers and woods. "It drives very much like a contemporary car," he says. With the driver sitting close and high, the mammoth steering wheel requires a rhythmic series of hand-over-hand turns. The backseat sits on a carpeted riser that’s part of the chassis — since most people in this car’s heyday were driven and wanted to see over the driver’s head.

"I follow my own inner taste, and that has served me well," says Linsky, a longtime local professional realtor who has also been active in the Desert AIDS Project and serves on the board of the Human Rights Campaign. "My collection is about cars I loved but couldn’t afford at the time. Now they’re a part of me. People express themselves in different ways. I’m just fortunate that I get to express it with these four-wheeled beauties."

Cars that bring back a rush of great memories for him and others add to the appeal. "I get a lot of thumbs-ups from people on the street," he says with a smile. "You get to a certain age and everyone tries to recapture their youth. They say it’s not possible, but you can get pretty close."

Showpieces in the showroom, a limo for date night. Keith McCormick and his wife, Desley, outside their 1959 Swiss Miss home in Las Palmas with a 1949 Buick convertible.

When you step outside in the morning to find a French model posing on your lawn, it’s pretty obvious that your 1959 Swiss Miss house has some serious appeal. Keith McCormick, however, isn’t known for the home he and his wife, Desley, purchased upon moving to Palm Springs from Blackpool, England, in 1981. McCormick has made a name for himself selling some of the raciest automobiles known to humankind at McCormick’s Exotic Car Auction on Indian Canyon Drive.

Five years after dropping out of school at age 15, McCormick sold his first used car at a 400 percent profit after some clever spray painting. Thirteen years later, after acquiring and selling several British auto dealerships, he and his family relocated to the desert. From renting the Union 76 gas station at the base of the Palm Springs Aerial Tramway and cashing in on the spring break crowds for 10 years to hosting the Vintage Grand Prix races in the 1980s when cars tore down Tahquitz at 150 mph, McCormick has enjoyed one heck of a ride.

His showroom and auctions have sold dozens of celebrity-owned cars, from Liberace’s 1932 Cord and several of Elvis’s Cadillacs to Frank Sinatra’s Rolls and Tom Cruise’s 1986 Ferrari 308. Any enthusiast would agree he holds the ultimate job — along with keys to dozens of prized automobiles he could whirl around the block any day of the week.

For his own daily ride, only a 2012 red Ferrari 458 will do. "It makes you feel like somebody when you get in it," says McCormick of the showstopper that can hit 212 mph. "I like coming to work in it; it just makes you feel good."

Together since they met as teenagers in 1966, the high-energy couple likes to hire a driver for their new high-tech personal limo so they can bar-hop or go on other excursions with their two children and two grandchildren. "We’re weekend warriors. And very young-minded," says McCormick, sporting one of his 140 pairs of Converse high-tops. "We’re probably the oldest people to attend Splash House."

This month, the man who has served for more than a decade on the chamber of commerce will produce Desert Concorso and his 59th auction, McCormick’s Palm Springs Collector Car Auction — an event that will attract more than 20,000 people and over 580 vehicles.

His sleek garage for three inspired a community car "vault" for 50. Westman with his cars in black inside his garage at Bighorn.

"I’m not really a car nut," says Canadian developer Jay Westman. "I just like a really good-looking car." Westman built his primo custom three-car garage four years ago at his Bighorn Golf Club home to house his favorite wheels. His good-looking cars possess a common trait. "Every one is black; it’s the most prestigious color. It ruins my garage if I have anything else," Westman admits.

These high-powered metal men in black include a 2008 Mercedes-Benz SLR McLaren with 650 horsepower and gullwing doors, a sophisticated 2010 Aston Martin DBS, and a 2001 BMW Z8, his "classic-looking roadster with a stick shift."

Under a black, high-gloss barrel-vaulted ceiling with chrome rivets and strategic track lighting, the cars present a mini museum of unique lines, custom seat stitching, and low mileage. "You have to drive them, just not a lot," Westman notes with a smile. Off the road they enjoy refined quarters in a garage that features a fridge and ice maker to supply the golf carts and an impressively stocked scotch bar.

Westman’s auto enclave sparked an even grander notion that comes to fruition this month with the unveiling of The Vault at Bighorn. Redefining the exclusive car collector garage, the community-concept-based space offers angled parking slots for 50 cars and four motorcycles. Members are sure to be wowed by its themed lounge, viewing deck, outdoor terrace, and highly realistic virtual race simulator. Those who get to step inside will notice plenty of accents taken from Westman’s own garage and even his cars, including Aston Martin–style furniture and a custom table fashioned after the tachometer inside his 2007 Ferrari 430 Spider convertible.

Westman appreciates each car for the distinct experience it offers behind the wheel. "Nothing drives and handles like a Ferrari," he says. "But it’s the McLaren that thrills me. That amount of horsepower to the back end is wild. Just halfway through the throttle, it’s like you’re on a banana peel." A very sleek, black banana peel, to be sure.