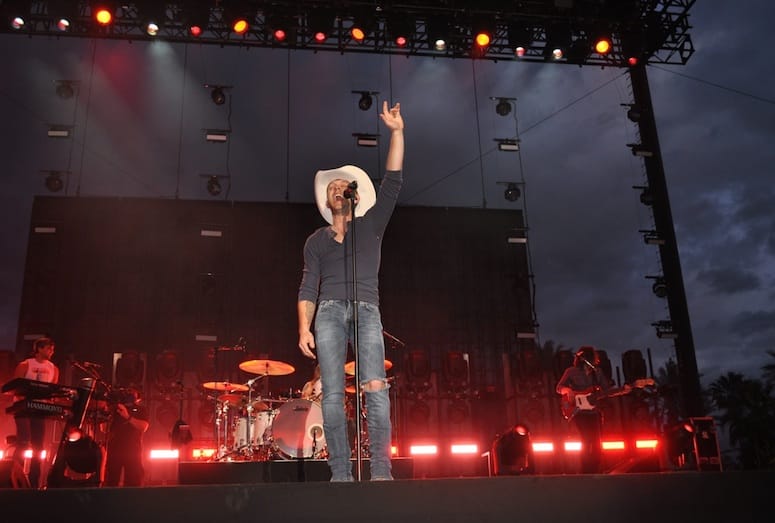 The answer came within the first 10 minutes.

During Stagecoach's recent stop at Indio’s Empire Polo Club Grounds, I had the opportunity to ascertain the differences and similarities between Coachella and Stagecoach. Gone are the larger-than-life interactive art installations, the VIP areas, and the configuration of the main stage. At Stagecoach, the “Mane Stage” is located on the west side of the polo grounds (not on the north), while the seating and standing areas are organized in a shell-shaped design, like an amphitheater, to give fans the opportunity to easily cross the field.

While I’ve been to the Coachella Valley Music and Arts Festival a dozen times since 2001, I had never attended the Stagecoach Country Music Festival. Country music was never my cup of tea, and my article research and picture scanning of the festival’s previous editions suggested that Stagecoach would not be my scene, but I was wrong. There are hundreds of bales of hay spread throughout the grounds that separate sections and provide impromptu seating.

There are hundreds of bales of hay spread throughout the grounds that separate sections and provide impromptu seating inside the Mustang and Palomino tents, and the food courts. There were some incredible barbecue booths (some of them participating in the Stagecoach BBQ Championship and offering delicacies with unexpected flavors at $3 per barbecue taste) and burger stands, but also plenty of other cuisine types (including vegetarian) available for every palate.

Beer and cocktails are on hand by the barrel, but so are healthy juices and coffee. Vendors boast Western-themed clothing and accessories, from vintage and new cowboy boots to hats in all colors and materials. There is even a kids’ area featuring the Half-Pint Hootenanny tent with so many cool activities you wish you were a kid again, and a petting zoo. There were old makeshift cabins and saloons, featuring performances by bluegrass and folk ensembles, like The Quebe Sisters Band.

There are corners of vintage tractors, trucks, and old makeshift cabins and saloons, featuring performances by bluegrass and folk ensembles, and the awesome Honky Tonk Dance Hall with line dancing teachers to help you practice your Redneck Angel, Slappin’ Leather, and Tush Push steps.

The energy is cheerful and contagious; it’s a fun, family-friendly celebration amplified by the sound of the fiddler and banjo. Yes, there I said it: fun. For somebody whose country music knowledge extended only to Johnny Cash and Loretta Lynn, being exposed to this genre’s nuances was ear-opening. I was blown away by the musicianship of the performing bands melding blues, hard rock, rock, and pop. The Band Perry put on an electrifying show.

Besides the great Gregg Allman and ZZ Top, I really enjoyed Justin Moore, Frankie Ballard, and Dierks Bentley (whose performance was rock-star material). Miranda Lambert’s set, which kicked off with a video showing pioneer women in different fields, was a rocking powerhouse. I found myself dancing to the tunes of The Oak Ridge Boys and jumping during The Band Perry’s electrifying show.

While literally bumping into Ashton Kutcher and Mila Kunis at the Mane Stage between sets, I realized that I was actually enjoying all this, and kept thinking that Blake Shelton’s lyrics in “Hillbilly Bone” might be true after all.

“We all got a hillbilly bone down deep inside
No matter where you from you just can’t hide it
And when the band starts banging and the fiddle saws
You can’t help but hollering, Yee Haw!”