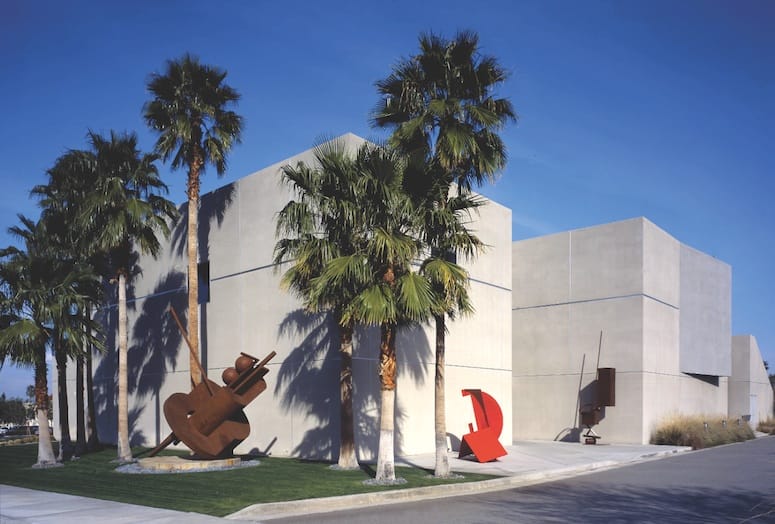 Sculptor Fletcher Benton and philanthropist Arlene Schnitzer will be honored at the fourth edition of the Palm Springs Fine Art Fair, which unfolds Feb. 12–15, 2015, at the Palm Springs Convention Center.

The fair will feature more than 60 galleries from around the country and beyond, showcasing their artists’ best work.

Benton, who’s based in the Bay Area and known for his large-scale abstract geometric sculptures in Cor Ten steel, will receive the fair’s Lifetime Acheivement Award. The artist shows with Palm Desert’s Imago Galleries, which will mount a 60-year retrospective survey at the fair. Benton began his career painting in his studio at night; by day, he was a sign painter until his first solo exhibition in 1961. He showed portraits of other artists he knew, including David Simpson.

He became restless with the canvas and started working with geometry and movement, and was making kinetic art with little to no knowledge of other artists doing similar work. By the 1970s, he turned to making constructivist sculpture, exploring geometry in a series called Folded Square Alphabets.

Benton’s work is featured in the collections of the Metropolitan Museum of Art, Whitney Museum of American Art, San Francisco Museum of Modern Art, Hirshhorn Museum and Sculpture Garden, and many others, as well as public installations including at San Francisco’s Louise M. Davies Symphony Hall.

Schnitzer, a trustee at the Palm Springs Art Museum and board member of the McCallum Theatre, founded and directed Portland’s Fountain Gallery, a pioneer in representing artists of the Pacific Northwest. She’s also the namesake of the Arlene Schnitzer Concert Hall in Portland.

Between 1993 and 2011, the year her husband Harold died, the couple donated more than $80 million to establish a diabetes health center and expand the Portland Art Museum. Schnitzer has also been an advocate for social causes, including homosexuality, the prevention of child abuse, and abortion rights.

Benton and Schnitzer will be fêted at separate celebrations during the fair, including at the VIP opening night preview and reception on Feb. 12.
The fair program includes a series of panel discussions, artist talks, and guided tours of the entire show floor.