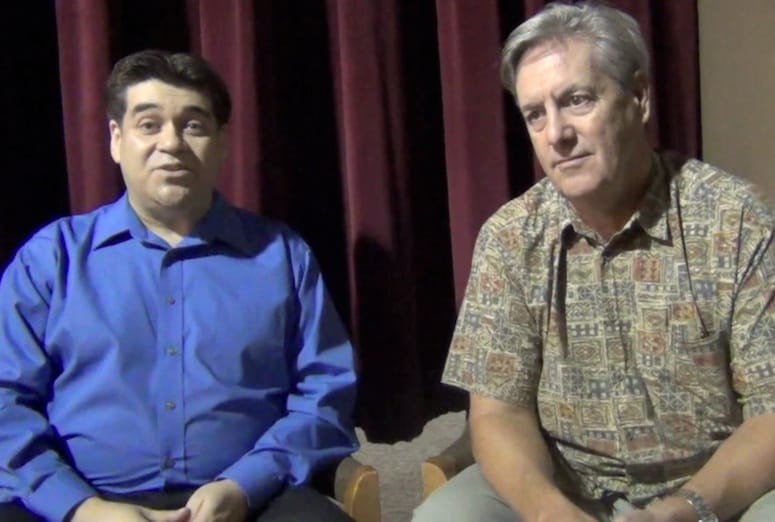 David Naughton had never been naked in front of the camera, but it wasn’t until a scene was over that reality took over.

“As a trained actor, when the camera is on, you are in another world and the world you create, even if you’re naked, you’re still within that role,” says Naughton, a Cathedral City resident. “It’s a detachment from what you are doing. But as soon as they cut, you’re a naked guy standing out in the woods, and you have people running to you with blankets.”

Naughton bared his body in his first starring role in what would become a horror classic, “An American Werewolf in London”, directed by John Landis and starring the makeup talents of Rick Baker, who would win an Oscar.

“I don’t know if John or Rick knew if (the makeup) was going to work on film,” Naughton says. “John said he didn’t wanted the werewolf transformation shrouded in darkness. He wanted it to happen in an apartment, in broad daylight. It’s the standard by which so many films are compared when it comes to real makeup versus computer generated.”

The 1981 movie is coming back to the big screen coupled with a special appearance by Naughton starting at 7 p.m. Sept. 13 at the Indio Performing Arts Center (IPAC). The movie begins at 8 p.m.

Proceeds benefit IPAC, which became a Saturday Night movie hangout this summer thanks to the efforts of Inland Empire resident Jerry Hernandez, who created the movie night event and approached Naughton about the fundraiser idea.

Naughton spoke with Palm Springs Life about making the movie, which catapulted him from a four-year stint as the “Guy in the Dr. Pepper commercials” to an full-fledged acting career. He currently is beginning his second season as Dr. Millard Whittison on the TV series, “Granite Flats”, which shows on BYUtv on Sunday nights.

When you met director John Landis before ever signing up for the movie, did you feel you needed to make a special impression on him?
“He knew of me from the Dr. Pepper commercials. He was an avid Tab drinker at the time. As he has said, he told me in the process, he was looking for guys who you would feel some affinity for their situation and likeable guys. And he felt if I could come across that way in those 30-second commercials, he felt I had a very good chance to getting the empathy of the audience in what I was going through in his film. I also had studied acting in London, and had toured Ireland and the rest of the United Kingdom on a bicycle. He realized I had some history of that area as well. It was the most informal job interview I’ve ever had before or since.”

What was the makeup process like with Rick Baker, a relative unknown at the time?
“We all were unknown at the time. John Landis had hired Rick Baker, who he had worked with when they were younger, in their teens, in their backyard doing makeup for movies. When I got the job, John told me I had to go over to Rick’s shop because he needed me for all of the preliminary makeup. It’s basically a garage. I walk in, and there is this guy with a beard and all these guys in T-shirts and jeans. They asked what part I was playing and I said David, and they said, ‘We feel sorry for you’. I went through some serious stages of makeup. They made molds made of my head, arms and legs, just unheard of stuff that I wasn’t expecting. That was only the beginning of what was a long, arduous task, but which ended up as a payoff in winning Rick his first Oscar.”