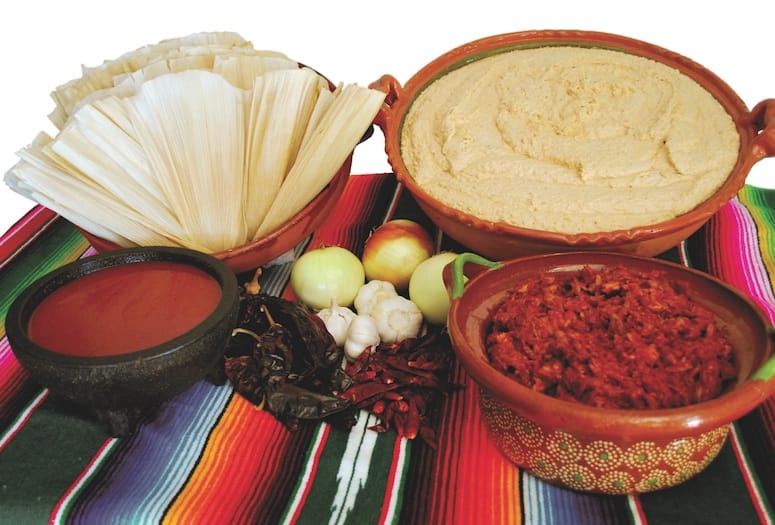 A tamalada is a joyful Mexican/Central American Christmas tradition where entire families gather in the cocina and concoct tamales assembly-line style.

Despite being associated with the holiday season, tamales are substantially older than Christmas, with origins dating back to 7000 B.C., when they were prepared as ritual food to honor the gods during festivals and served as the original hot pockets for on-the-road warriors.

Masa (dough) made from teocintle (corn’s precursor) was filled with whatever was handy (precooked snails, fish, beans, boiled fruit) and then, depending on the region, wrapped in husks or banana leaves and charred in a fire. Today, tamales are steamed for tenderness and fillings range from sweet or savory to spicy or mild.

Since 1992 the Indio International Tamale Festival (Dec. 5–6), ranked as one of the top 10 All-American Food Festivals in the nation by the Food Network, has been offering all the variety of fillings your foodie fantasies can afford.

Can’t make it this year? Here are a few restaurants with some of the best family tamale recipes in the Coachella Valley. El Mexicali Café, Indio (Jalisco, Mexico) — Since this popular spot opened in 1981, it’s featured authentic multigenerational recipes. The season ramps up in October when mother and daughter Carmen and Monica Murguia knead the masa and mix the fillings to perfection. The meat is served red (beef or pork are drenched in a California pepper sauce) or green (tomatillo, green bell peppers, and cilantro). Non-meat tamales come with a queso and jalapeño filling. Served only mid-October through Christmas. After Dec. 31, start your new year off right with shrimp-stuffed chiles. 82720 Indio Blvd., Indio. 760-347-1280; www.elmexicalicafe.com

Rincon Norteño, Indio (Monterrey, Mexico) — The name means “northern corner” and is where Prudencio Flores emigrated from when he arrived in Indio in 1964. His daughter, Rosa Flores, inherited the family’s regional tamale recipe: pork in a red chile sauce, chicken in tomatillo sauce and bistecitos, a stew of beef, onion, tomato, and peppers that creates its own flavorful sauce. There is also a cheese and jalapeño option. If they don’t sell out at the festival, you can buy one in-house or place an order for Christmas. Try it with a champurado — Mexican hot chocolate. 83011 Indio Blvd., Indio. 760-347-4754; www.rinconnorteno.com Tamales with green and red sauces from Macario's Grill.

Macario’s Grill, Indio (Mexico City, Mexico) — Mercedes and Gabriel Galicia brought their family recipes to the menu when they bought this beloved restaurant eight years ago. Pork filling is stewed in California peppers, guajillo peppers, salt, pepper, garlic, and onions; the chicken is stewed in green tomatoes, jalapeño, salt, pepper, garlic, onions, and cumin. The sauce from the meat is added to the masa; the result is served as part of the house Fiesta Platter. There is music seven days a week. 80783 Indio Blvd., Indio. 760-342-5649; www.macariosgrill.com