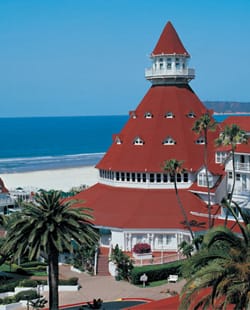 When the announcement of a culinary weekend in San Diego arrived, it didn’t excite this dedicated foodie in the least. For me, San Diego had always been an unsophisticated “sailor town,” home of Sea World and a great zoo where parents of young children were obliged to make an annual pilgrimage.

My husband, Bart, and I spent happy times there with our son, Carter, and daughter, Paige. But my only memory of good food from those days is standing at an outdoor kiosk eating fish and chips from a paper carton.

Admittedly, all things change, and Southern California did seem to be acquiring a new culinary cool. Sponsoring the weekend was Hotel Del Coronado, an elegant hostelry we had only ogled on our way to the affordable vacation condo we rented for our family.  Now the chef in charge is Jason Schaeffer, who trained with Thomas Keller, recently named America’s top chef by Time magazine and chef-owner of the world-renowned French Laundry restaurant in Napa.  Maybe it was time to think outside the paper carton.

Getting to the Hotel Del (as the locals call it) in Coronado is a standout thrill. Though referred to as an island, Coronado is actually a peninsula connected by a narrow isthmus of sand-flanked highway called the Silver Strand and reached by way of the spectacular San Diego-Coronado Bay Bridge. This scenic, two-mile swoop of concrete soars 250 feet above San Diego Bay, framing sailboats and submarines in the sapphire harbor and the skylines of both San Diego and Coronado on the horizon. To drive this engineering wonder feels like being shot into the sky. It opened in 1969 as a toll bridge, and the public debt was wiped clean in less than 20 years.

In the early days, most guests traveled to the Del by train, a trip that took seven days from the East Coast. Wealthy guests made the trip in a private rail car. Upon arrival, the car was unhitched and parked on the hotel’s spur track. Not only was the hotel part of America’s movement west, but it was also part of the way of life epitomized by luxurious railroad resorts — watering holes for the rich and famous. Today the Hotel Del stands as one of the few still flourishing.

The history of Coronado begins with Elisha S. Babcock Jr. and Hampton L. Story, two Midwestern businessmen who became acquainted after moving to San Diego in the mid-1880s. A mutual passion for hunting led them to explore Coronado, then a paradise for birds and small game. The two entrepreneurial thinkers so appreciated their newfound venue that they began to envision a splendid resort capable of seducing a worldwide clientele.  Enticing other investors with their vision, they purchased the peninsula in 1885, laying out streets and a pipeline under the bay to carry fresh water to their hotel, which would be completed in 1888.

Architects James and Merritt Reid designed the Queen Anne-style hotel, built using Chinese laborers and skilled craftsmen from San Francisco. They crafted thousands of feet of redwood, fir, cedar, hemlock, pine, and oak and created the largest all-wood structure in the country a mere 11 months after beginning construction. They installed modern sprinkler systems, but to this day there has not been a fire. Another advanced feature was the use of electricity, a novelty for the time. When the hotel opened, every bedroom had an electric light, and three birdcage electric elevators served the rooms.

Though land sales boomed, Babcock and Story were bankrupt by the turn of the century. John Diedrich Spreckels, son of sugar king Claus Spreckels, repeatedly rescued them from financial ruin during the hotel’s early years. By the time he moved from San Francisco to San Diego in 1906, Spreckels stood at the helm, with Babcock working as an employee. As the railroad brought in a steady flow of guests, the hotel prospered and became a popular haven for the rich and famous.

The Sourcebook of American Architecture notes that the Del is the grande dame of American resort hotels. This gingerbread castle by the sea, with its red-roofed spires, stands as the oldest Pacific Coast resort from Alaska to Acapulco. It has played host to royalty, 11 U.S. presidents, and countless movie crews. Some Like It Hot, the 1958 hit comedy starring Marilyn Monroe, Jack Lemmon, and Tony Curtis and directed by Billy Wilder, was filmed on location at the resort. Wilder found its Victorian architecture a fitting backdrop for the movie’s 1929 setting.

A century of renovations and mechanical upgrades of the 31-acre resort have improved function, but carefully managed to retain its historic charms.  Palm trees planted by original landscaper Kate Sessions sway above the garden, where the atmospheric gazebo still attracts alfresco weddings. Initially, the hotel had 399 guest rooms and 75 bathrooms (the largest number of indoor toilets anywhere in the country at that time). After modernizing, “original” guest rooms today number 381, but each boasts a private bathroom and some odd room configurations as a result of extensive additions — all part of the Del’s old fashion allure. Newer accommodations in the Ocean Towers, cabana buildings, and beach house were built with private baths.

A $55 million restoration completed in 2001 added a world-class spa and state-of-the-art fitness center with studios for aerobics, spin classes, and Pilates.  The breezy Babcock and Story Bar serves tapas and signature margaritas to accompany endless picture-window ocean views. The renovation replaced the former stiff-upper-lip Prince of Wales restaurant with bright 1500 Ocean, a hip new spot designed in a pumped-up palette of ocean colors and run by hot new chef Shaeffer, veteran of Laurel and George’s at the Cove who also served as opening sous chef for the acclaimed Thomas Keller’s Per Se restaurant in New York City. Shaeffer’s Southland coastal cuisine is far removed from pork foo yong on the Del’s 1940s menu or the likes of chateaubriand and veal Oscar dominating hotel kitchens in later decades. The avant-garde Shaeffer trades on ingredients indigenous to the region from Santa Ynez south to the tip of Mexico’s Baja peninsula. “We take full advantage of local seafood and products grown or raised near the coast,” he explains. “I like food to be light and bright and a little whimsical.”

Shaeffer showcased examples during a food festival cocktail party, presenting yellowfin tuna a la plancha with tiny tortillas, a luscious lobster bisque in demitasse cups, and tiny plates of pan-seared foie gras paired with walnut streusel in a pool of port reduction. A bite-size square of berry crisp lay beside a shot of vanilla yogurt smoothie. His entrée menu changes with the seasons, but his signature from Laurel, Muscovy duck confit — crisp-skinned and succulent on a bed of beans, kale, and sausage — deserves a year-round niche.

Of the three restaurants we visited, my favorite was Rama, an upscale Thai restaurant with appetizers scrumptious enough to earn a top score on any menu in New York City, including a  “bird nest” of crisp-fried noodles woven around fresh shrimp, succulent chicken, and beef satays with house-made peanut sauce, and a spicy take on Chinese-style egg rolls. Oceanaire presented irresistible platters heaped with caught-that-day shellfish, while the trendy Stingaree showcased its youthful vibe in a club setting where flavors of a downtown reborn wafted through the celebratory weekend crowd.

Riding back across the bridge to our Victorian castle, the evening sky dimpled with stars and the moon brushing silver strokes over rippling harbor waters, I had to admit, the culinary scene was much improved over my standup fish and chips. Yes, San Diego had taken on the trappings of a cosmopolitan city, much like our own children, who also grew up.