Bob Alexander goes to work with The House of Tomorrow in the backdrop.


Editor's Note: You can tour the House of Tomorrow during Modernism Week - October. Be the first to see the newly renovated Alexander Estate, Oct. 13-16, 2022. There are multiple time slots open starting at 9 a.m. to 4 p.m. each day. In addition, tickets are available for a twilight tour and cocktail reception for a limited number of guests on Oct. 15.  Visit: palmspringslife.com/our-events/house-of-tomorrow-home-tour


Jill Kitnick, who turns 70 this month, is walking Luna, her black poodle, down a quiet Santa Barbara street when I call, catching her off-guard. Has she heard, I ask her, what’s happened to her old family home in Palm Springs? “Oh, dear,” she says. “Now what?”

The home we’re talking about isn’t just any house in Palm Springs. It’s the architectural equivalent of Steve McQueen’s 1968 Mustang GT — the car he drove through the streets of San Francisco at over 100 miles per hour in the action-thriller Bullitt. It’s a Beatles mop-top haircut, the Givenchy-designed little black dress Audrey Hepburn wore in Breakfast at Tiffany’s, a one-of-a-kind Le Corbusier chaise lounge covered in cowskin leather. In short, it’s iconic.

Over the past 62 years, it’s been referred to as The House of Tomorrow, The Pleasure Dome, and the Elvis Honeymoon Hideaway. But its most accurate moniker is The Alexander Residence, the home of legendary builder Robert “Bob” Alexander, his glam wife, Helene, and their young daughter Jill — the same Jill walking her puppy in Santa Barbara. 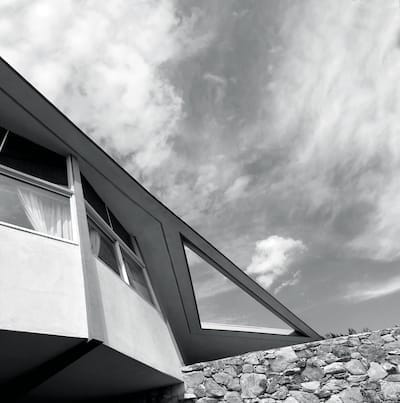 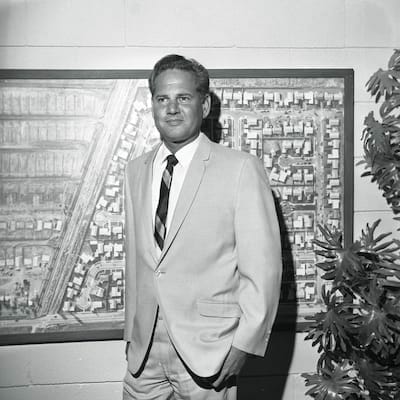 Jill and her parents lived in the Vista Las Palmas home from 1960, when the futuristic house with its circular rooms and jet-wing roof was constructed, to Nov. 14, 1965, when Bob and Helene — along with Bob’s parents, George and Mildred — boarded a private Lear jet that, shortly after taking off, slammed in to the San Jacinto Mountains during a thunderstorm.

And just like that, as Carrie Bradshaw might say, everything changed. Jill, at 13, went to live with her aunt and uncle in Los Angeles. Her Indian Princess-themed bedroom, with Shiva, Lord of the Dance, perched on bedposts to watch over her in her sleep, was abandoned, along with the rest of the house’s contents, and left to bake in the desert heat.

“After the accident,” she says, “my uncle didn’t want anything to do with Palm Springs ever again. He couldn’t even say the words Palm Springs. I think that feeling created a distance between me and that house as well. It was just too painful to think about.”

Jill would never sleep in the house again. A great uncle, Leonard Alexander, leased the house to Elvis Presley; The King of Rock and Roll and his young wife, Priscilla, spent one night there on their honeymoon in May 1967. 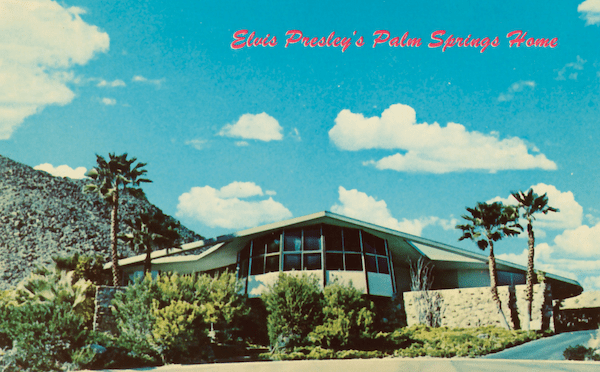 A postcard commemorates the night Elvis and Priscilla Presley spent at The Alexander House on their honeymoon in May 1967.
After that, the once-storied house mouldered: The wife of a San Jose rancher bought it following their divorce; a seldom-seen recluse spent his last years in the house; another troubled owner was cited by the city for letting the stagnant swimming pool fester into a mosquito swamp; in 1987, a Boston bank repossessed the property and sold it cheap to one Leonard Lewis, also of Boston, who decided the best thing to do with the ol’ house was turn it in to a carnival sideshow.

Come sleep in the bed where Elvis and Priscilla begat (most unlikely) Lisa Marie! Party around the pentagon-shaped pool in celebration of The King’s 30th wedding anniversary!

OK. That last claim was just too much for Jill Kitnick. Lautner had nothing to do with the Alexander House, she tells me. Nothing. The storied home, celebrated along with the Alexander family in an over-the-top Look magazine story in 1962, was designed by modernist architect William Krisel, the same man who designed hundreds of Alexander-built homes in the Palm Springs area, from Twin Palms, their first project together, to Vista Las Palmas, their last. The Krisel design was a well-documented fact. So why on earth would Lewis tell people otherwise?

Bob and Helene Alexander in a photograph in the September 1962 issue of Look magazine in the House of Tomorrow, which became known as the Elvis Honeymoon Hideaway.

“Leonard had more than a little P.T. Barnum in him,” says a former neighbor,  mentioning the 19th century showman known for such celebrated hoaxes as the “Fiji mermaid,” a creature said to have the body of a monkey and the tail of a fish.

“Leonard thought that suggesting the house was designed by John Lautner would increase its salability,” explains Trevor O’Donnell, a Palm Springs architecture expert who leads tours of the city that often include the Alexander home. After years of pushing the Lautner fantasy, Lewis listed the home in 2014 for $9.5 million. Though the phrase “There’s a sucker born every minute” is widely attributed to Barnum, it appears that none of them fell for Lewis’ hucksterism and, in the ensuing years, the asking price dropped precipitously (approximately a million dollars a year) until December 2020, when the Norma Desmond of desert architecture began her return to the spotlight with her purchase — for $2.6 million — by the most unlikely of rescuers: a retired rabbi from Seattle and his ex-brother-in-law, who were seemingly so anonymous that almost every story published about the sale of the house, from the Wall Street Journal to the New York Post, referred to them simply as “mystery buyers.” 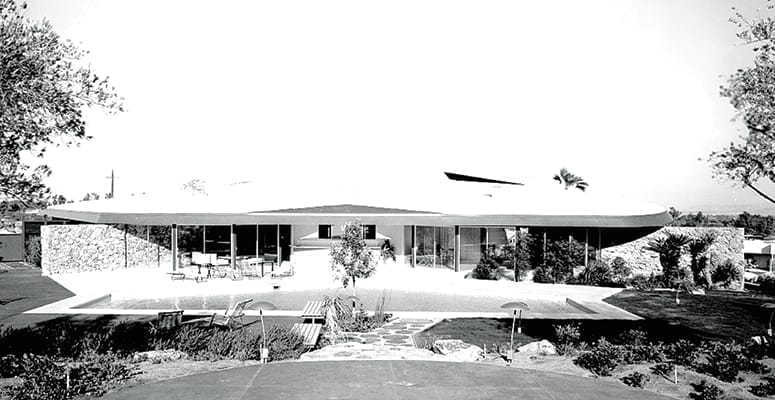 The geometrically designed patio and aquamarine pool still has a swanky ’60s vibe.

Why so clandestine? “I have no idea,” says Dan Bridge, the retired rabbi from Seattle. “We haven’t been hiding. I’ve been here [in Palm Springs] for years. We’ve restored a number of Palm Springs homes, including another Alexander home in the same neighborhood. It’s a passion of mine. I love taking this architecture that is so brilliant and yet easy to understand and bringing it back to what it was.”

Did I know, he asks me while we stand outside the property— right as two middle-aged women on bicycles stop, pull out their phones, and snap selfies in front of the house — that some say this is the most photographed home in all of Palm Springs?

As we walk around the Vista Las Palmas house, still months away from being ready for its return to the spotlight, Bridge seems both excited and exhausted — excited about the future of the home and exhausted by what it’s taken to get to this point. 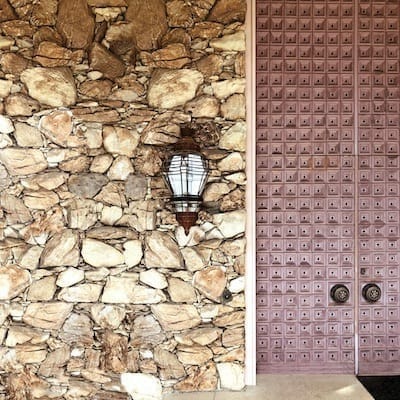 The theme of stone and pattern plays out throughout the house. 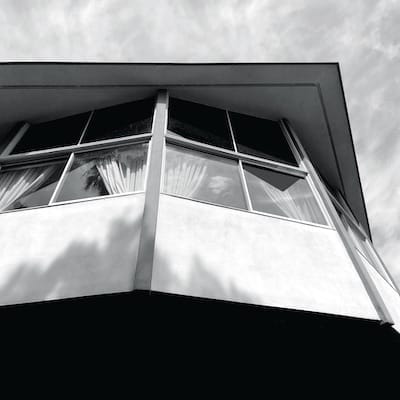 The Alexander House was designed by the modernist architect William Krisel.

When they bought the house, he explains, the first thing they did was contact The Getty Research Institute, which houses Krisel’s papers, and request everything that had anything to do with the midcentury gem. “We couldn’t go and look at the material ourselves because of COVID-19 restrictions, but they were wonderful in getting us original plans, photos, those kinds of things.”

Then, they started demolition, which as it turns out, was a mistake. Once they’d applied for permits, the city imposed a 120-day stay on their remodeling efforts and directed staff to initiate an application for a change in historic status, which was granted Sept. 30. 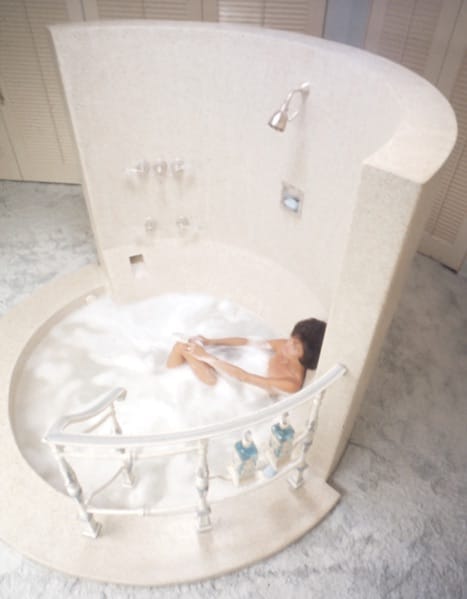 Helene soaks in the tub. 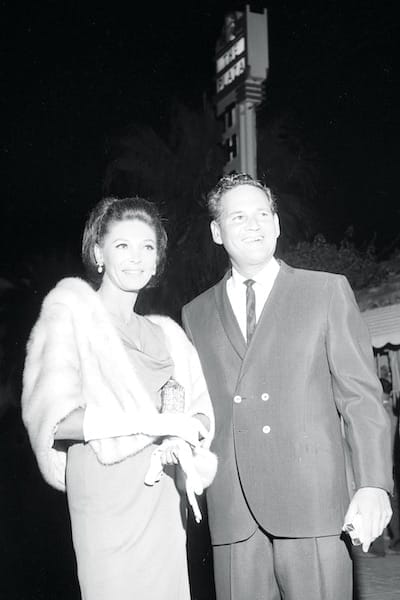 The Alexanders at the premiere of Miracle of the White Stallions at the Plaza Theatre in April 1963.

The house was deemed a Class 1 Historic Site because of its historic association with Krisel and Alexander and as “a unique example of architecture from the mid twentieth century.” And the whole Elvis and Priscilla Presley honeymoon thing? That blip in time didn’t constitute “a meaningful contribution” to the home’s history, the staff report says. What was important was the home’s “innovative forward-minded modern design” and its “space-age aesthetic.” And the fact that Bob, Helene, and Jill Alexander lived there for five years.

When I tell Jill that the new owners of the house plan to restore the house, as much as possible, to the way it was when she lived there, not as a de facto museum but as a livable single-family home where, perhaps, another little girl might have her own princess bedroom, she is at a loss for words. “I’ve only been back to the house once since the accident,” she finally says. “I remember standing in that circular living room and being flooded with memories of all that had gone on in that room back when I was a child and my parents were such big fish in such a relatively small pond. It was an out-of-body experience.”

I ask her if, when the restoration is complete, she’d consider going back. “Maybe,” she says hesitantly. “If I’m invited.”

Once she’s ready for her closeup, I’m sure the new owners would like nothing more.

• READ NEXT: Cole Eyraud Rides to the Rescue to Save Cabot's Pueblo Museum.