How Desert Are You? - A Quiz to see if you are a true desert resident. 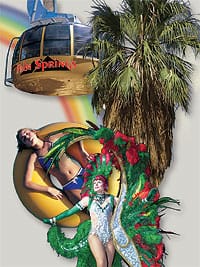 Some folks just can’t take the heat. After one or two summers, they’re outa here before their blood has had time to thin. The rest of us not only have come to terms with 120-degree days, but also embrace them as a rite of passage. We wear our sweat like a badge of honor — as well we should. In fact, when someone comments on any triple-digit day, we’re likely to respond, “Heck, this is nothing. I remember the day it was 128 degrees — in the shade.”

But being a true “desert rat” requires more than tolerating heat with aplomb. There are other yardsticks, so to speak.

To determine how desert you are (and we are talking specifically about the Coachella Valley desert), take the following multiple-choice “quiz.” Check the A, B, or C that most closely matches your experience. Then rate yourself at the end.

A – I have a palm tree in my yard.
B – I have seen the palm trees in Palm Canyon.
C – I can spell Washingtonia filifera.

A – I have attended the Riverside County Fair and National Date Festival.
B – I have made date-nut bread with local dates.
C – I have seen Romance and Sex Life of the Date at Shields Date Gardens in Indio.

A – I have played slot machines at a local Indian casino.
B – I have hiked in the Indian Canyons.
C – I live on Indian land.

A – I have been to a local golf tournament.
B – I have played golf in a local tournament.
C – I have ridden in a golf cart.

A – I saw Frank Sinatra and Sonny Bono when they were alive.
B – I have seen their graves at Desert Memorial Park.
C – I have sung “My Way” and/or “I Got You, Babe” in a Karaoke bar.

83-125 points — Congratulations! You truly are a desert rat. Unfortunately, much like the fringe-toed lizard, you are likely to become listed as an endangered species in the near future.

41-82 points — Respectable showing, but you’re more of a desert mouse than a desert rat. At least you have something to which you can aspire. Now get out there and get some sand in your shoes.

1-40 points — Who were you kidding when you deemed yourself worthy enough to even take this quiz? Either you just moved here, or you’re in denial. Obviously, you’ve got a lot of work to do.

Does Only Time Tell?

How long do you have to live in the desert (and we’re talking year-round) before people identify you as a local? We asked people who have lived here for varying periods of time to see if any pattern became apparent.

Our subjects were Tom and Elizabeth Kieley, who have lived in Palm Springs for 70 and 83 years, respectively; Fernando Perera, a Rancho Mirage resident for 19 years; and Kathryn Stevens, who has lived in Bermuda Dunes for three years. Tom and Elizabeth have retired from their respective jobs as an insurance broker and homemaker. He also served on the Palm Springs City Council, the airport commission, and the convention and visitors authority board. Fernando is a composer for film and television; he also produces and arranges records. Kathryn is a real estate agent for Tarbell Realtors in La Quinta. Here’s how they answered our unscientific survey.

Where did you live before living here?

Elizabeth: Born in the Coachella Valley

Do you miss snow?

Elizabeth: “It’s fun to go up in the mountains and see it occasionally.”

Kathryn: “[The weather here] is somewhat like Dallas, but not as humid. I like hot, dry weather.”

Do you sometimes call friends or family in colder climes to gloat?

Elizabeth: “Sometimes.” (She notes that her husband regularly calls his family in North Dakota.)

Fernando: “I get great pleasure talking to my friends in New York on New Year’s Day and I’m sitting with a mimosa by the pool while they’re trying to decide how many sweaters to wear to go out. … I don’t gloat, but when they call, I will ask, ‘How’s the snow?’”

Kathryn: “Yeah, sometimes. I have an aunt in Chicago.”

How often do you eat outside?

Tom and Elizabeth: Once or twice a week year-round

Fernando: Four to five times a month on average year-round

Kathryn: Sporadically four to five months of the year

What’s the sun protection factor on your sunscreen?

When you get an invitation that says “desert casual,” how do you dress?

Elizabeth: “We don’t wear jeans and shorts. No coat or jacket. I always wear a dress.”

Fernando: “There are certain things I still retain from being an East Coast person. I wear a light jacket, dress shirt, and dress slacks — more corporate casual than desert casual.”

Kathryn: “Slacks and a nice top, nothing with sequins. And I hardly ever wear stockings.”

Tom: “No. There are too many good things to do.”

Fernando: (Fernando caddied at an exclusive golf club when he was 11.) “I knew after the second day that I not only hated the sport, but that I would never play the sport. It was all I could do to wait for the ninth or 10th hole, because that’s where they had the refreshments. [The golfers for whom I caddied] would ask, ‘Do I need a three iron or a six wood?’ ‘I have no idea; I just want to get to where the Coca-Colas are.’” Fernando admits he has gone out with golfing friends, but he packs champagne or wine and just drives the cart. “That was a great shot, guys,” he says, and then sips his drink.

Kathryn: “I’m not really interested because the ball is so small.”

What do you do for recreation?

Fernando: “I consider what I do [for a living] play.” He then adds theater, movies, athletics, going to Los Angeles, museums, and reading. “I’m a voracious reader.”

Kathryn: “I have gotten into real estate, so I really don’t have any recreation. I have a really burning desire for what I do, so I guess it’s not so bad.”

How do you feel about the current population growth and development?

Elizabeth: “It’s hard to adjust to it sometimes. It’s quite overwhelming.”

Fernando: “I think it’s great. When I came here, the median age was 59. It’s now 36 and dropping like a rock. The addition of four-year universities opens up the desert to become more vibrant and year-round, so we will have the same amenities as a major metropolitan area without the trappings and misgivings of a major metropolitan area. The quality of life is not going to change, and I am all for responsible development. … Things are coming to the desert that will give the residents who are here full time a much broader experience, which will only make it that much more appealing to tourists.”

Kathryn: “Sometimes I think it’s terrible. The traffic — and people drive so crazy; they bring all those bad driving skills here. … It really makes me wonder, ‘Where are all these people coming from?’ Right now it doesn’t bother me too much, because I am involved in real estate.”

How many kinds of cacti can you name?*

Tom: 10 (though not without photos)

Fernando: One (saguaro). “But I have been to Moorten Botanical Garden, and I know there are a whole lot more.”

Kathryn: “I have some in my yard, but don’t know exactly what they are. They have sticky prong things on them. I guess they’ve all got the little sticky prongs. Call me back in a year and maybe I will be able to name three or four — but don’t hold me to it.”

Do you have any annual tradition or activity that specifically relates to living in the desert?

NOTE: The main categories of cacti in the desert are barrel, beavertail, cholla, foxtail, hedgehog, and prickly pear; and there are multiple subspecies. Saguaro cacti are not indigenous, though they are used in local landscaping.