Tacos: Coachella Valley Experts Tell How to Make the Perfect One 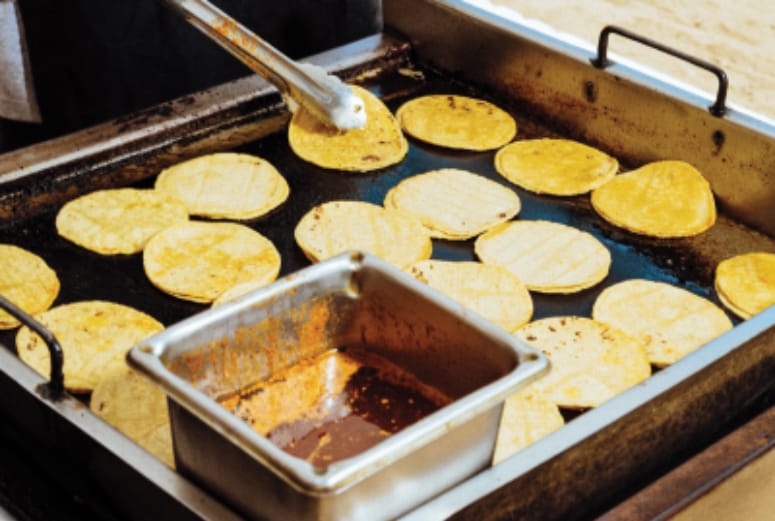 There’s a T-shirt you can buy on the internet and in kitschy souvenir shops emblazoned with the sentence I hate tacos said no one ever. It comes in multiple colors, with various fonts and graphics, and sometimes swaps the word “one” for the name “Juan.” And while it’s meant to be humorous, it’s one of those sentiments that’s funny because it’s true. Everyone. Loves. Tacos.

While the origins of the dish that’s proliferated almost every corner of the globe remain uncertain, its meteoric rise over the years clearly stems from its popularity with workers in cities throughout Mexico who would turn to the stuffed tortilla as a quick, inexpensive meal. Tacos would become a staple of Mexico’s vibrant street food culture and eventually cross the border into the United States around the turn of the 20th century along with migrant workers who moved north and wanted a taste of home.

There are, of course, variations of this country’s tacos today that have seriously strayed from their humble roots (foie-gras-stuffed versions are an actual thing, and a certain fast-food chain offers neon-colored hard shells derived from flavored Doritos), but for many, the almighty street taco — that small and simple stalwart that started it all — is still the way to go.

In the Coachella Valley it’s easy to find mom-and-pop shops doling out tacos daily (often for a couple of bucks or less), but what exactly makes a solid taco? We asked three East Valley taco makers to find out.

VIDEO: Watch how the tacos are made at El Tranvia and Taco Jalisco.

That mighty mainstay of any respectable taco might be the biggest factor differentiating the street varietal from its counterparts. While restaurant-style soft tacos are generally larger in size (measuring 6 to 8 inches or even bigger in diameter), may be derived from flour, and could be handmade to order, street tacos almost always come with already-prepared corn tortillas that are relatively tiny — typically around 3 inches — and practically fit in the palm of your hand. “The point of the little taco is you can eat them faster if you’re on the road or if you’re in a hurry,” says Oscar Ventura, owner of El Tranvia Restaurant in Coachella.

Ventura’s grandparents started selling tacos out of a pushcart on the streets of Zamora, in Mexico’s Michoacán state, in the 1960s before upgrading to a larger food wagon they dubbed their tranvia (which translates to trolley car in English). “If you go anywhere in Mexico, there’s one of those on almost every corner,” he says. “What they were known for was all the truck drivers and taxi drivers who’d come for the tacos.” His grandparents later started selling out of trucks, and eventually, brick-and-mortar taquerias before moving to the Coachella Valley, where they run Tita’s Cafe, also in Coachella.

Ventura followed in their footsteps with El Tranvia, where he serves a hurried working crowd the same way his grandparents did. “We sometimes sell out of the street tacos because so many people come in during their lunch hour. They grab them, eat them, and go.”

Street tacos are the specialty at Up in Smoke, an Indio catering company run by Raul Robles (below) and Johanna Valenzuela. 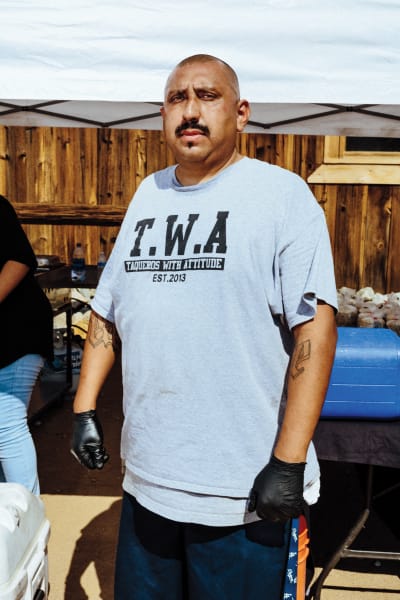 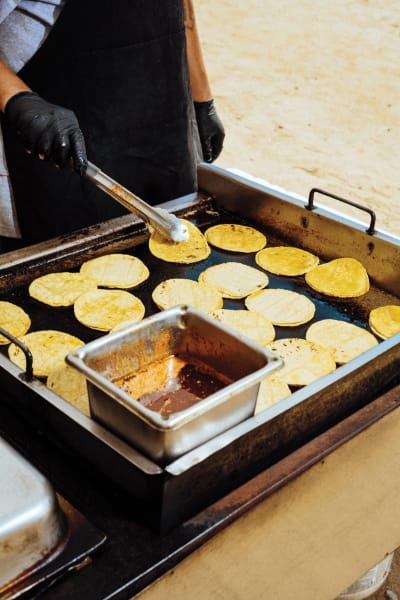 Carne asada tacos are the most popular at El Tranvia, where owner Oscar Ventura says they cook the meat “old-school” style.

To ensure that the tortillas’ structure stays sturdy no matter the fillings, street taco makers typically layer them with two tortillas. And equally important: The tortillas get a quick trip to the grill prior to serving, giving them that slight blackened char and smoky essence. The trick, says Johanna Valenzuela, who’s been running the popular Indio-based taco catering company Up in Smoke with boyfriend Raul Robles since 2013, is dipping them in seasoned oil before placing them on the flattop. “When you put them on the grill, you can start smelling the spices. It reminds me of eating in Mexicali,” says Valenzuela, who was born in the capital city of Baja. “I love that smell, that flavor.”

Ventura intones, “If you just heat it up it doesn’t taste the same. And it makes it a bit crispy so when you put salsa on it, it doesn’t get soggy.” 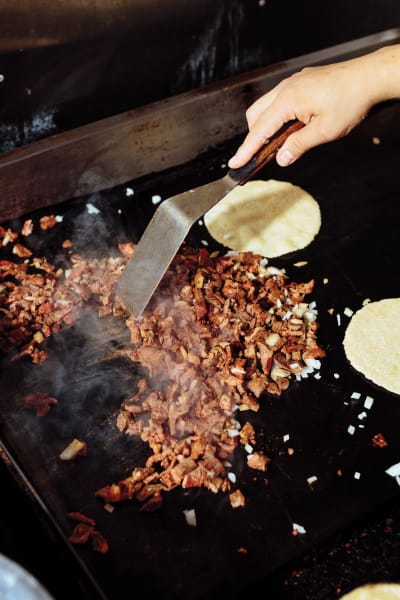 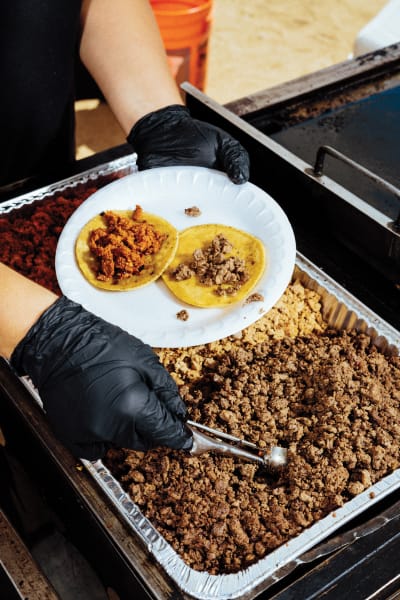 You can’t toss a basket of chips and salsa here these days without hitting a newfangled taco — from poke topped with wasabi mayo to jackfruit slathered in cashew cream. But traditional street tacos usually contain the classic proteins — pork, beef, and chicken — and, in Mexico, specialties often depend on where you are.

“Mexico, like America, is a big country, and where we’re from in the central west part of Mexico, the recipes are very different from the north or south of Mexico,” says Cesar Aguirre, who, along with wife Rocio, owns Taco Jalisco in Indio, which, thanks to its proximity to Interstate 10 (and the magic of the internet) is often a stop for buses of tourists from around the world as well as legions of locals. “If you go to the coast, they use a lot of fish and shrimp tacos. In Guadalajara, you’ll find more asada, pastor, lengua, cabeza.”

Coachella Valley venues offer more types of tacos than you’ll probably be able to try in a visit — from tender carnitas and barbacoa to deep-fried basa fish and vegetarian-friendly nopales. Of course, every spot has its specialty. For Up in Smoke, it’s the pork al pastor, which gets marinated in onions, pineapple, chiles, and garlic and grilled, making for a juicy final product. “People are like, ‘It’s so bomb,’” says Valenzuela, who came up with many of her recipes by watching her mom and others cook and then experimenting to produce her own plays on the classics. “Your meat and your salsas are the key to a good taco. Those are the things you’re creating and making your own.”

While some unfamiliar with the art of noshing on organs may be wary of lengua at first, the beef tongue taco is perhaps the one for which Taco Jalisco is best known. “A lot of people come in just for that,” Aguirre says. “They try it and they love it and they keep coming back for it.” Taco Jalisco uses slightly bigger tortillas for heartier appetites. “Street tacos in Mexico are almost like tapas in Spain — a little portion of something. We’ve found American taste usually goes for something larger.”

At El Tranvia, customers most often ask for the carne asada. “We prepare it old-school style and grill the meat whole before it gets cut and then we throw it on the flattop grill. That’s the difference in the taste,” Ventura says. “It’s a little more work, but it’s worth it for that smoky flavor.”

• For more photos, view the gallery.

Street tacos, first and foremost, should showcase the meat inside and, traditionally, they come with only a few tried-and-true toppings: diced white onion, a sprinkle of cilantro, and a squeeze of lime. After that, opinions on what (if anything) should come next vary, and the decision is often left to the taco eater rather than the kitchen, thanks to salsa bars with sauces ranging from mild green to roasted red to creamy avocado.

Both Valenzuela and Ventura grew up topping their tacos with whole beans, so both offer pintos on the side. And it’s commonplace at many shops to find pickled carrots and jalapeños along with sliced radishes for color and crunch.

Sometimes, though, it’s what you leave out that’s vital. “No sour cream. No cheese. No lettuce. That’s an American restaurant thing,” Valenzuela says. “To me that’s not a Mexican street taco. No, no, no.” 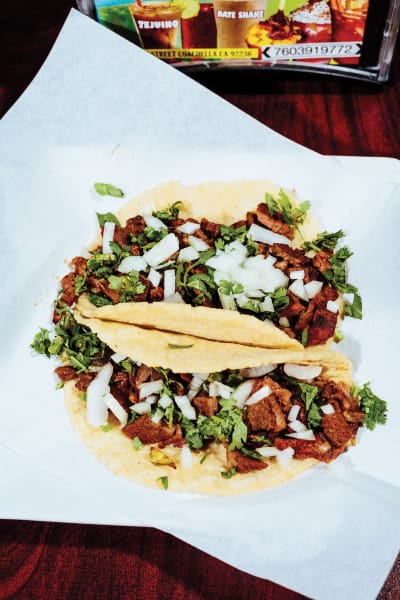