How to Turn an Old Kitchen into a New One 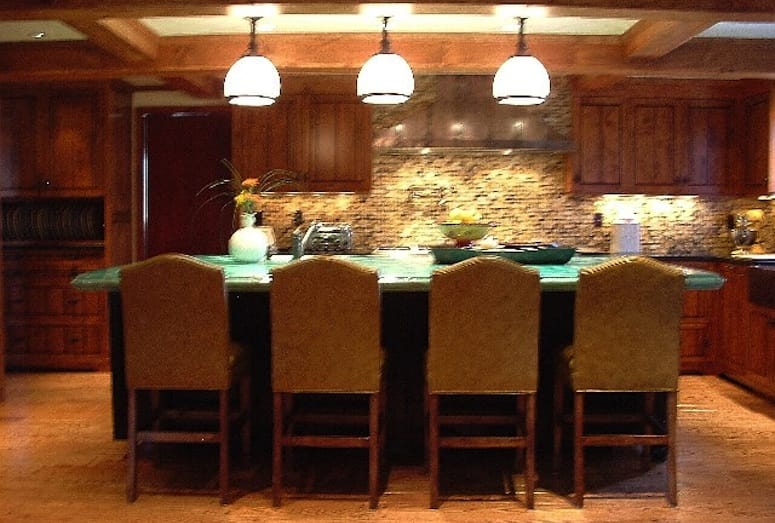 Fourteen years ago, Dann Foley began working on two vacation homes in Palm Springs and has been based in the desert ever since.

“I knew I would live here permanently,” he says. “I made the move and have never looked back. I still wonder at the mountains and the desert every day since I arrived. Palm Springs is truly my home.”

Since moving to Southern California, Foley has also appeared on national television, most recently on NBC's American Dream Builders hosted by Nate Berkus.

To examine how Foley tackles a project in an older home, Palm Springs Life talked with him about this kitchen located in Short Hills, NJ, a suburb about 27 miles west of New York City.

The home sits on a hillside so the kitchen is actually on the second floor. Foley notes that this required additional time for crane permits to lift the heavy range and refrigeration units to the second floor balcony outside the kitchen.

“The house is over 100 years old and though there have been multiple additions and renovations over the years, the kitchen sits in the original portion of the structure in the center of the house,” says Foley. “We knew there would not be an opportunity to expand the size of the space. I did, however, open up the wall between the kitchen and the back hallway and staircase to give the illusion of more space.” The old kitchen was very dated and had a small island that was woefully inadequate for a family with four active children. Black-and-white vinyl flooring was replaced with oak planks that match the original floors in the surrounding rooms. “The match was complete down to the wooden pegs and aged color,” says Foley. “The design was meant to appear as if it had always been a part of the house,” says Foley. “One of the reasons the homeowners bought the residence was for all of its original woodwork. They requested that the new cabinetry be built, finished, and detailed to match the original cabinetry, yet still have all the modern conveniences. There was also an unsightly structural beam that sat below the ceiling and was off center. I decided to use that existing beam to create a coffered ceiling detail that mimicked the same treatment in the library/billiard room opposite the kitchen.” He also chose a fully integrated refrigerator and freezer so that they would disappear into the vintage-inspired kitchen. The custom cabinetry was made with Alder wood. “We knew that a large island would be imperative for preparation and serving the children meals in shifts as they come and go,” says Foley. The custom leather counter stools are easy to clean and the antique glazed aqua tiles on the island give off both a modern and a vintage vibe.

A 60-inch professional range required commercial grade ventilation. “That meant a bigger and louder motor,” says Foley. “I had to disguise both the motor and the noise. I accomplished this with the custom-made copper hood and by installing a remote fan on the outside of the house to draw the heat and odors outdoors.”