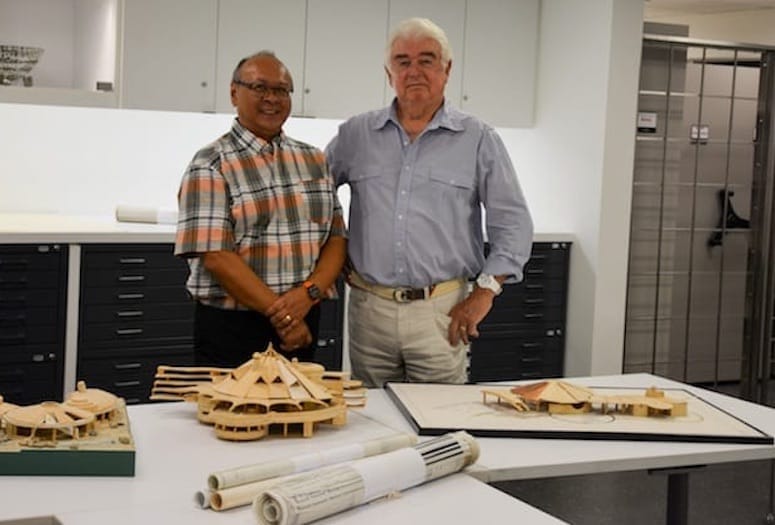 Hugh Kaptur (right) with Frank Lopez from the Palm Springs Art Museum Architecture and Design Center in 2018 after items donated by the architect led to the discovery of four previously unknown homes designed by him.
PHOTOGRAPH COURTESY PALM SPRINGS LIFE ARCHIVES

Steve Keylon thought he was writing a book about an architect. Turns out he could have just as well been chronicling the life of an artist.

What Keylon knew about Palm Springs architect Hugh Kaptur changed over a period of a year interviewing him, scouring over hundreds of Kodachrome slides, professional images, and drawings of his work in the desert and beyond that dates back to 1956.

“I think what surprised me and what stuck out is that he's truly an artist,” Keylon says of Kaptur. “He could have been an excellent painter, illustrator, sculptor, and so much of his work is sculptural, has these three-dimensional qualities, especially the things that have sort of that Southwestern look, with the heavy walls and deep windows.” 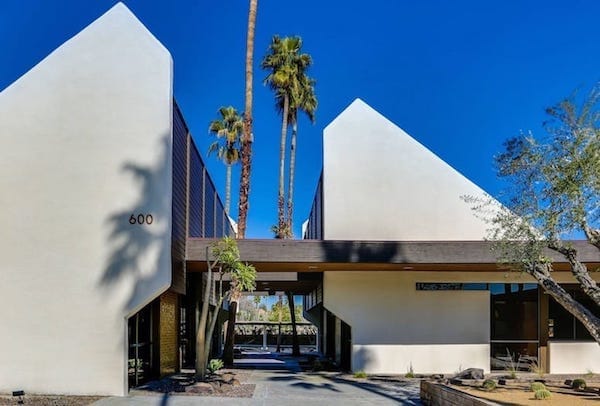 If you’re trying to make a visual connection to Kaptur’s work in town, there is the plaza that bears his name on Tahquitz Canyon (where Koffi is) and the Musicland Hotel on South Palm Canyon Drive. They are not representational by themselves, but they reveal the diversity of Kaptur’s work.

“He really believed that architecture in Palm Springs should look toward lessons of the Southwest, because of the climate, rather than looking to Los Angeles and the international style, with all the wood and glass,” Keylon says. “His was a more practical approach that evolved as he got to know the place, but he really is a sculptor. His architecture are living pieces of art that people can live in, work in, or shop in.”

Keylon’s research and Palm Springs artist Gary Wexler’s design can be viewed in the book, The Modern Architecture of Hugh Michael Kaptur, which in June received the gold medal for architecture at the 2021 Independent Publisher Book Awards, also known as the IPPY. The silver medal, coincidentally, went to Arthur Drooker’s book, City Hall, which included Palm Springs City Hall and was previewed in the May 2021 issue of Palm Springs Life.

Conceived in 1996 the IPPY Awards celebrate independent, university and self-published book titles. The Kaptur book was submitted under General Categories where gold, silver and bronze winners were named in 88 genres. Keylon, vice president of the Palm Springs Preservation Foundation, had previously written a book about the late architect Herbert Burns, who actually designed the house he lives in. Keylon is the editor of Eden, the journal of the California Garden and Landscape History Society.

He chats further about Kaptur, who turned 90 in May, and writing the book with Palm Springs Life. 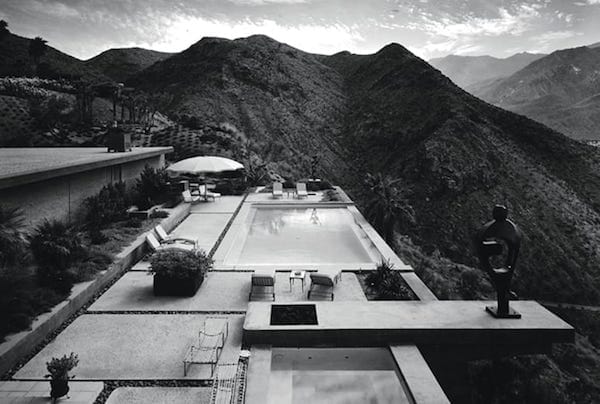 Was this a book project from the outset?

In 2017 or '18, we knew there was going to be an exhibition on Hugh Kaptur's work at the Palm Springs Art Museum Architecture and Design Center. The preservation foundation had given them a grant to digitize some of the drawings, and to help pay for that we got the idea that maybe we should do a book. They used to call them tribute journals, but they're 60 to 80 pages. I started out thinking I'd do that.

But I was just so impressed with his body of work, I thought that it really needed to be a much bigger book to really showcase the scope of his work. That's how I got involved with this, and how the book came about. It was meant to also be kind of an unofficial exhibition catalog for the show.

Most of the time when I do a project like this, I'm starting with very little information, and building and finding stuff, which is fun. This was a completely different type of project, which I had never done before, where not only do I have the person to speak to, you're not speaking to children or whatever, and that he kept everything. I had Frank Lopez, who was the archivist at the Palm Springs Art Museum Architecture and Design Center. I would go once or twice a week for a few hours, and we would go through drawings, and as he was doing his work, he would bookmark stuff he wanted to show me.

Then it really helped as Hugh gave me all this stuff, and I went piece by piece, and became familiar with these projects from his beautiful color slides, or photographs that he had commissioned. Then there was just such a wealth of material, it was completely overwhelming, and for a long time I didn't know how to do this the right way. I really tried to do it just kind of chronologically, and sort of methodically, and he had different partnerships in his professional life. I'm interested in the people, not only the work that they've done, but the people are so important, the clients, the designer. I wanted to tell those stories too, and because that feels in the context, the cultural history of Palm Springs, which is so important. 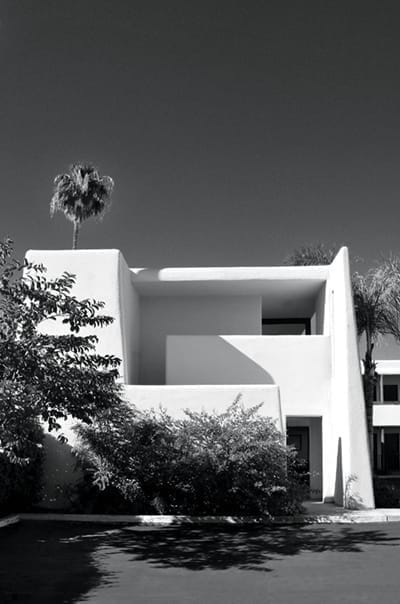 I interviewed Hugh Kaptur a few years ago at his Palm Springs house. He comes across as pretty unassuming. What were your impressions of him?

The architects of his period all were. They were just working. They worked to support their families. They would take jobs they didn't necessarily love, but they took it because they had to. They were just doing the work, and trying to do it well, and trying to make each project interesting for the client. But I don't think that any of them ever imagined that they would be celebrated in such a way. He is an unassuming, down to earth, humble person. He always says, "I'm just a Polish immigrant from Detroit, I don't know why anyone's paying attention to me."

I think many people don't realize how much of an architecture’s work doesn’t come to fruition. His career was impacted by that, and yet it didn’t seem to derail him.

Well, he had to, I mean, he was supporting his family and supporting himself. They weren't living like Rockefellers here; they were trades people. If something was great, but didn't get built, I thought that was important, because it didn't get built because of the recession, or something. He always said, "I would do my greatest design and then boom, of course, there'd be a recession."

What's interesting is he's working on a house now that when I saw the plans, I said, "Hugh, this is the best thing you've ever done." There were so many houses that he designed in the 1990s that were more organic in nature, like John Lautner's two houses up at Southridge. For whatever reason, because there were recessions or something, they never got built. He designed a house for himself like that, which never got built. He has a client who bought land on where he was actually going to build one of his houses and designed this house that's absolutely magnificent. Hopefully it gets built, but I mean, the drawings are just magnificent. It's amazing because it's completely new, but even there are Hugh Kaptur touches throughout. 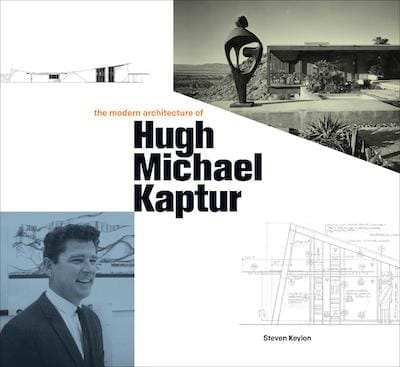 Do you have a favorite Kaptur design?

I have a few. I think the William Holden house in Southridge is one of my favorites there. My actual favorite thing in the book is there was a community that was being proposed way up, I think maybe north of Vista Chino called Palm Springs Panorama. One day Hugh, he didn't want these drawings to go to the museum, so he pulled up these huge sheets. I almost fainted they were so amazing. I devoted like four or five pages to just these drawings — they were never built. You can see some of these being adapted for other things, but the drawings are just so dynamic, so evocative of the period. He's just such a great artist that I think that's my favorite part of the book is those drawings.

What do you think is Hugh Kaptur’s imprint on Palm Springs? His lasting legacy?

His lasting legacy will be that he worked here for so long, and had so many different phases in his career. Patrick McGrew was an architectural historian on the Historic Site Preservation Board. His quote was that, "When you're driving around town and you fall in love with the building but don't know who designed it, nine times out of 10 you'll find out it was Hugh Kaptur," and it's true. I just think that he's left such a big imprint on this community, throughout the Coachella Valley. There's so many of his structures that are so conspicuous. The Impala Lodge in the Warm Sands area, one of his first buildings that was all these dynamic triangulated angles. 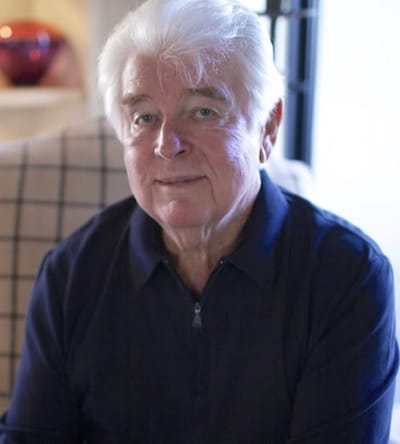 He really celebrated the structure of it, the architecture of it, so if he used steel beams, they became part of the design, they weren't just there. He wanted the architecture, the engineering to show. I just think he was the last of that Palm Springs school that was sort of sprung after World War II, and went through, I guess, the ’70s when Donald Wexler, Bill Cody, and E. Stuart Williams were doing such incredible work. Kaptur will be remembered along with these masters who were so talented, and left this legacy of the most important collection of modernist architecture in the United States.

• READ NEXT: Desert Dreamers 7: The Architects.