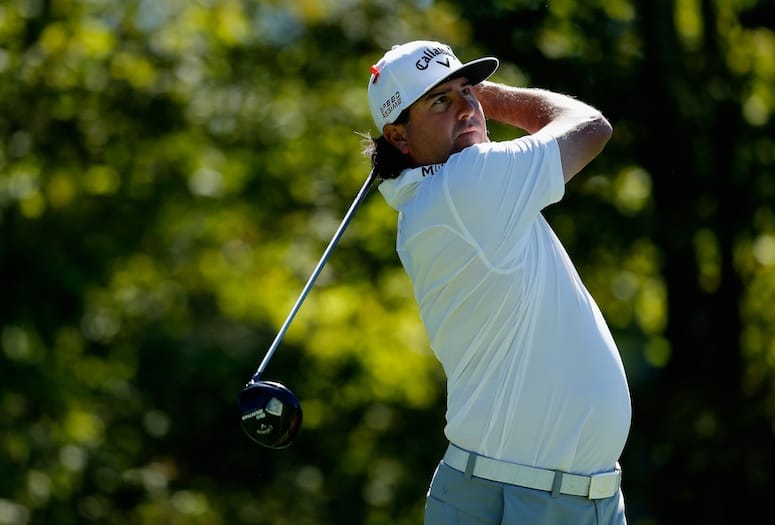 Long known for playing with a hot-blooded temper, San Diego-raised PGA Tour veteran Pat Perez looks to have discovered a newfound calm to couple with his new wife and solidified golf game.

Fully seasoned with 344 Tour events under his belt, the popular Perez has found the winner's circle but once in his career, a three-shot victory coming in 2009 at the 50th anniversary of the Bob Hope Classic. Perez set a 36-hole Tour record with a 61-63 start in that win, and an additional record for most strokes under par for the first 36 holes of an event.

Yet, despite a career that includes 100 top-25 finishes, 43 top-10s and more than $15 million in on-course earnings, Perez is still seeking that sequel win. Might the Humana prove his salve? A return to victory would make the 38-year-old Perez the event's first multiple winner since Phil Mickelson (2002, 2004). While prepping for his appearance at the Sony Open in Honolulu, Hawaii, Perez chatted with Palm Springs Life about his fondness for the Coachella Valley, his mellowed mood and his new marriage.

During Humana week, I know lots of guys use the celebrated grounds of The Madison Club to practice.  I've long heard you're among them, correct?
"I've got a lot of friends there and I'm kind of involved with Discovery (Land) a little bit; it's quite an amazing spot. I'll hit balls there in the morning and then go back there and practice when I get done with my round. The place is in immaculate shape and the greens there are phenomenal."

Have you played a lot of other desert courses?
"I love the west coast. It's my spot. I grew up in Torrey Pines and been to Palm Springs a thousand times and now I live in Scottsdale (Ariz.). I know those courses, and I would like to get that second win anywhere on the west coast. I've played SilverRock and La Quinta (Country Club) PGA West, obviously, and I've played at Madison, Bighorn and The Hideaway Club. But I've played the Palmer Course at PGA West more than any of them."

You've knocked on the door countless times in your career. What's keeping you from that second win?
"I need to be more consistent on Sundays; on Sunday, I don't have 18 great holes. You've really got to close on the back nine and when I won in '09, that's what I did. That's the difference; you see the guys that win, and it's really great stuff on the back nine on Sunday." Pat Perez: "You can react in two different ways: You can get pissed, or you can let it go. And I've tried really hard just to let it go."

For many years, you had a rep as a pretty hot-tempered player. But watching you last season, it looks like you've no doubt mellowed a bit. How did you turn that corner?
"I don't know; there's not a method to what happened. I still get upset a little bit, but I just channel it differently. And I'm not going to say that I'll never get mad again. There might be a situation where something rolls up and, who knows, it might come out again. But I've tried to not express much out there. One of the main reasons (I've tried to change), is I got tired of the media talking about it. That's one of the reasons I've changed, sadly enough. But I just feel a little calmer now; a little more in control of what I'm doing. You know, if it goes bad, it goes bad. I've been in a bunch of situations lately the last couple of years where things have gone wrong and I've dealt with it differently; just let it go and try to move on. It's just a conscious effort. You can react in two different ways: You can get pissed, or you can let it go. And I've tried really hard just to let it go."

Congrats on getting married on New Year's Eve.
"Being married sets half my life up. That part of my life is secure and we have a great relationship. I can concentrate on two different things: My marriage and my golf game. It's nice to have that in balance."