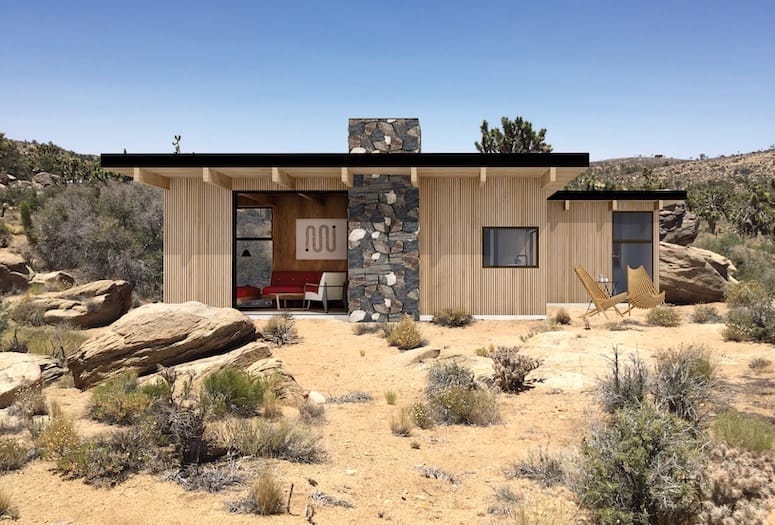 Duane Smith founded his residential design/build practice, Hundred Mile House, in 2006. His new design for an 800-square-foot, one-bedroom cabin is pre-permitted in San Bernardino County and ticks the boxes for space, natural light, and premium finishes.

Between the sensitive renovation of a classic California ranch house designed by Clark & Frey in 1949 and adding a general contractor license to his design-build firm, Duane Smith of Hundred Mile House came up with ready-to-build cabin design for clients seeking a simple, modern structure suitable for second homes and rentals.

The HMH ONE cabin is more than suitable. A fully tiled bathroom, a tile-clad wood or gas fireplace, polished concrete floors, exposed-beam construction, an open-plan living space, and a skylight above the king-sized bed are all part of a minimalist cabin Smith designed to deliver three big-ticket items for relaxation: a big bed, big shower, and big views from every room.

Answering his clients’ call for a cost-effective hideout, Smith says his stock design provides “comfortable, uncompromised living in a mere 800 square feet,” all in a pre-permitted package that’s more affordable than prefab.

Two offset modules separate public from private spaces, joined by a glass entryway with a built-in bench, accessed through a five-foot-wide pivoting glass front door. That proper entry experience represents a series of thoughtful moments throughout. Customizations, including off-grid options, let clients put their own stamp on their cabin before it’s fast-tracked to build and use. Smith took us behind the scenes while the first two are under construction. 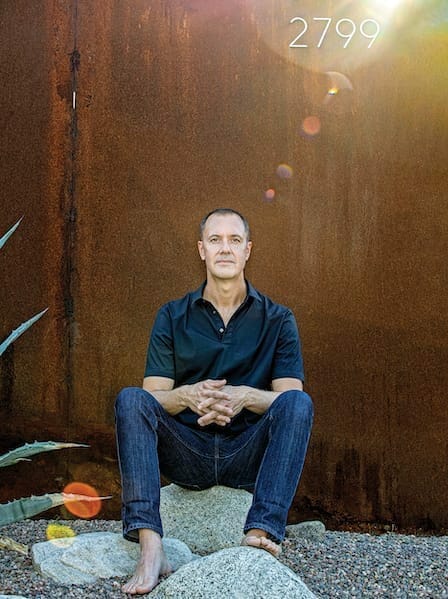 Tell us about the origins of HMH ONE.

Over the past five years or so, and especially in the High Desert, I’ve done a number of 400- to 600-square feet cabins as well as renovations to existing cabins. That’s given me a taste of what people are looking for in a smaller retreat. People want a premium experience. Just because they’re renting through Airbnb or VRBO doesn’t mean they want IKEA cabinets, basic fixtures, and a box layout. They want an escape from their day to day. As more clients came to me, I realized I didn’t need to reinvent the wheel every time. Ground-up homes are time-consuming, and people want to hit the ground running. About three years ago, I started playing around with the idea of a pre-permitted one-bedroom getaway that would be ready to go whenever a client wants it. This beautifully answers everybody’s needs.

From where did you pull inspiration?

I’m super inspired by the Case Study House program, midcentury California architecture, and the Bauhaus ideals of function first, then form follows — not allowing the space to dictate how you live in it, but allowing how one lives in the space to dictate how you design it. The cabin is a highly functional 800 square feet. The materiality came from that movement also, where material pallets are simple, low-maintenance, and a bit experimental.

How did you test the design?

I came up with the general concept then probed a few of my existing clients, particularly those who have rental properties in the High Desert or are flipping homes up there. They were a good testing ground for what is rentable and what they need in a premium-finished, one-bedroom cabin.

Why did you decide against prefab?

I explored going a prefab route. A lot of people don’t know this, but prefab is typically a little more expensive than site-build. There’s still all of the site work and buttoning up that has to be done. You still have to pour your foundation and do all your utilities. You still have to have a general contractor of your own to assemble it on site. I wanted this to be relatively affordable for people, and the way to do that was site-built. So, it’s not prefab, but it’s pre-designed and pre-permitted.

How do you see the cabins being used?

A weekend escape, a self-contained backyard guest house, or a weekly rental. The first two will be ready in May so we can do tours. I’m working on a two-bedroom, two-bath version now. 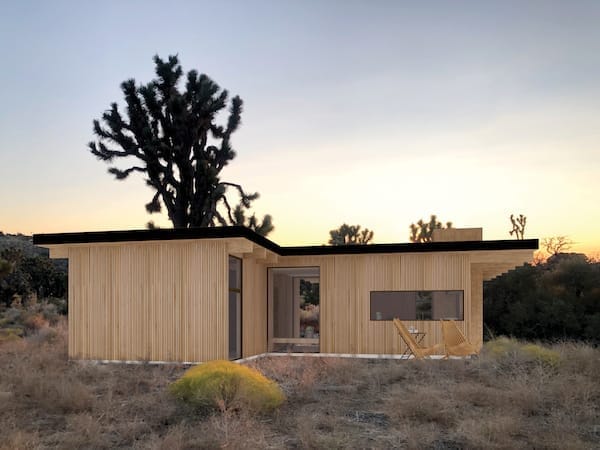 A wood-burning or gas fireplace heats the house when needed and an 8-foot disappearing slider opens the living space to nature. “It’s the only sliding door in the house,” says Smith. “So why not create an experience?”

What makes it a “cabin”?

To me, a cabin is not a full-time residence. The word “cabin” allows it to be a little rougher, maybe a little less polished, and forgo some of the conveniences like a walk-in pantry or a walk-in closet. The interiors are not all perfectly drywall finished; they’re a warm, rustic plywood, which you don’t have to worry about plastering and painting because you dinged it. A cabin is also about the length of time you stay there and what you’re doing. 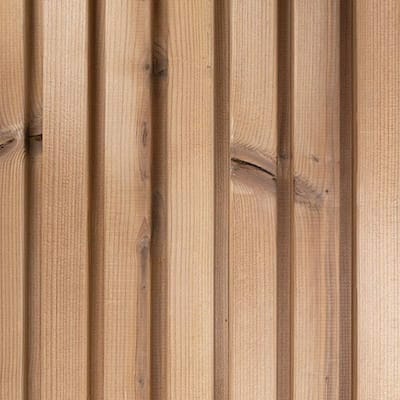 Thermally modified Triple Shadow Nordic Pine by Lunawood and Yakisugi by Nakamoto Forestry are among the rustic siding options. 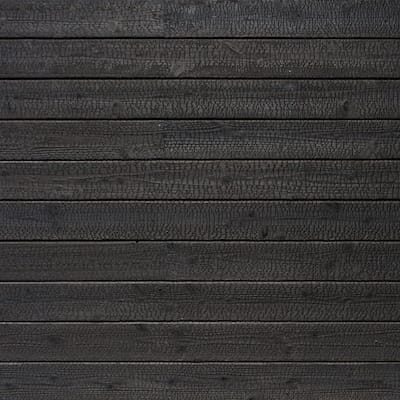 Which ties into the glass slider that “magically disappears behind the fireplace”?

When you’re sitting in the living room on this wrap-around built-in sofa, looking out through an 8-by-8-foot glass door, whether the door is open or closed, you’ve got nature as your TV. You’re looking at the coyotes, birds, and road runners. I didn’t design a spot for a TV. A lot of my clients, especially the younger ones, say they don’t need one; they watch on an iPad or laptop anyway. Larger houses have disappearing glass walls and I wanted that same experience of complete transparency and indoor-to-outdoor living in this cabin.

What materials are significantly used?

All three exterior cladding options are durable enough to stand the test of time, resist rot and termites, and are zero-maintenance. Thermally modified pine from Finland weathers naturally to a silver-gray. Yakisugi, a burnt cypress with the burnt texture left on, is sustainably forested in Japan. Weathered steel is fire-resistant, like the Yakisugi, and has a 100-year life. Any one of these would be perfect in the desert and not require anybody to think about them in their lifetime. 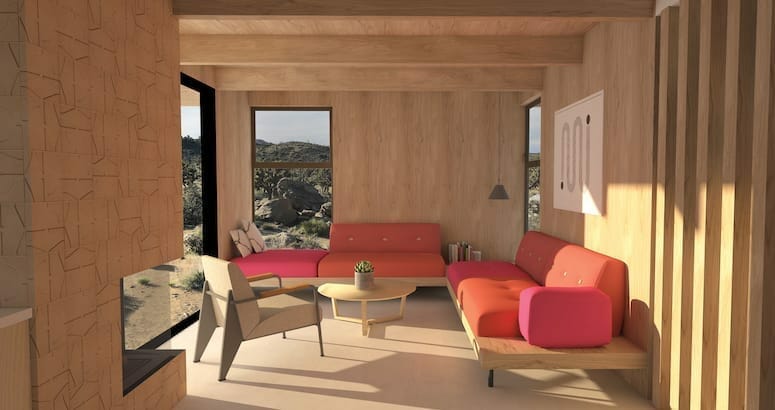 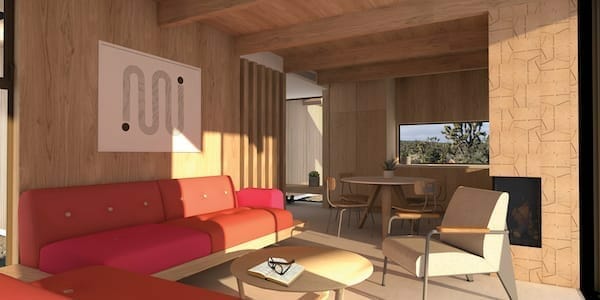 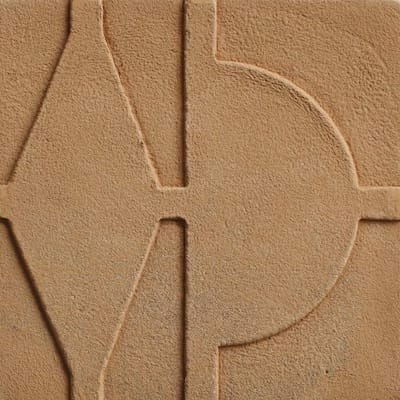 What products and finishes can buyers expect?

Our finish packages make the decisions quick and easy. We partner with Clé Tile, all made in California. Everybody knocks them off, but I think they do the best job. The appliances are Fisher Paykel, an underrated brand. They’re beautifully made and hidden behind the millwork. We also use Styline Doors, Weathershield Windows, and Hot Purple Energy and Tesla for solar power systems.

Explain the thinking behind the built-ins.

I didn’t want a lot of furniture to clutter the spaces, and why not have the furniture become part of the architecture? Clients don’t need to shop for a sofa or a bed. The two base cushions of the L-shaped, built-in sofa are twin mattress size to sleep two more people. 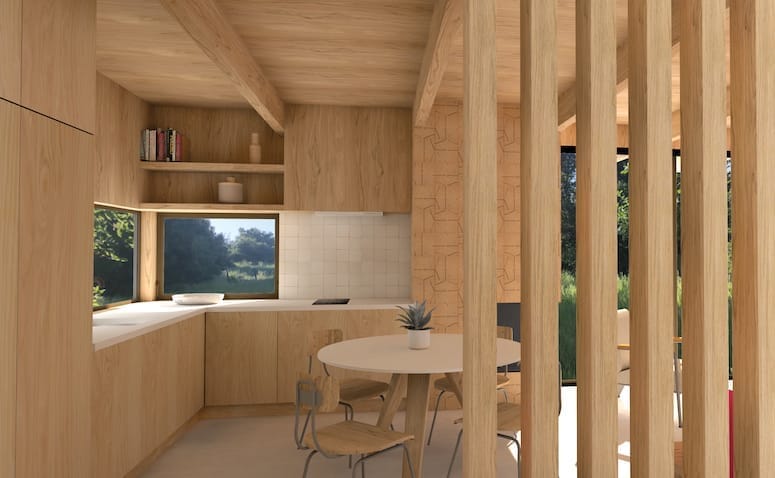 An efficient L-shaped kitchen, large enough for two people to cook side by side, wraps around a dining table for four. Premium appliances from Fisher Paykel hide behind custom millwork where they don’t impose on the living space. Caeserstone quartz tops the counters and dining table.

And the dining table is a remnant from the countertop?

Right. We use one sheet of Caeserstone quartz for the countertop and dining table top, which integrates the two into the same material palette and doesn’t waste any material.

What customizations and upgrades are available?

We can modify fixtures and finishes, slightly adjust locations and sizes of windows, and flip the plan or rotate it to take advantage of the views. We can customize the interior cladding if somebody wants to do drywall, painted, or plaster walls. Tile, plumbing, and lighting fixtures are nice opportunities to express yourself. We can add a cedar hot tub, plunge pool, outdoor shower, firepit, vegetable garden, or built-in grill. For a turn-key property, our “move-in-ready” service finishes the cabin with furniture, cookware, dishes, linens, and artwork. 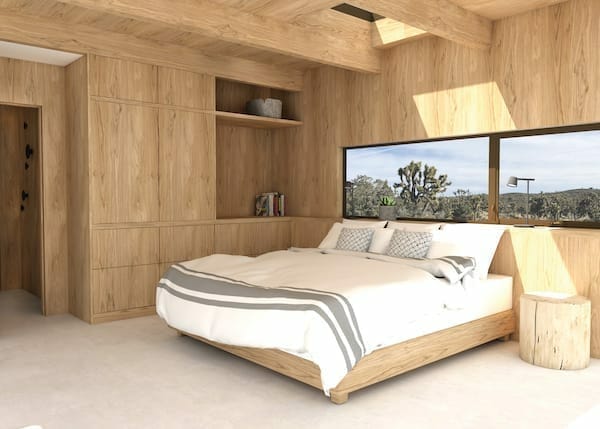 Built-in storage, a skylight, and room for a king-sized bed make the spacious bedroom a minimalist refuge.

Where can we build one and what about permitting?

We can build these anywhere. The fastest turnaround is San Bernardino County, where it’s pre-permitted as a stock design, meaning it doesn’t have to go through a plan check that can take three or more months. We’re working on pre-approval in Riverside County now, and then other locations as the need arises. 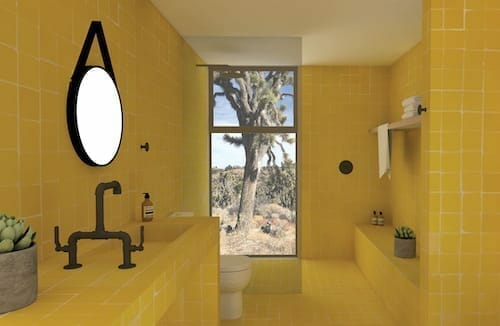 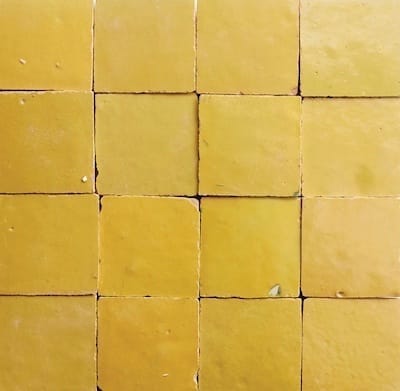 Once the client has the site, we site the cabin. We do the planning for utilities, septic, and water and submit that to the county for the site plan approval, which takes about three weeks. Then we’re permitted and ready to build. If all of our ducks are in a row, it can be as quick as two months from starting the conversation to breaking ground. Building is about six to seven months. Right now, it’s still a little bit slower for everybody but the design is ready to go.