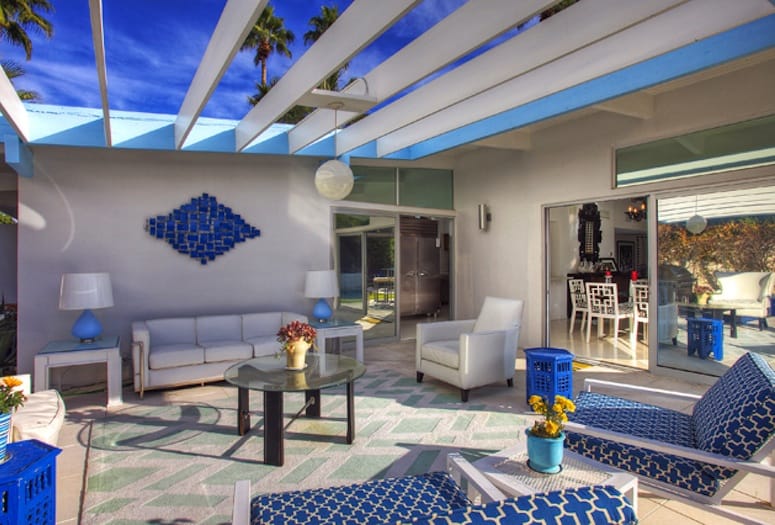 VIDEO: Take a tour of this William Krisel-designed home in the Vista Las Palmas neighborhood.

Ten years ago this month, Hurricane Katrina slammed into the Gulf Coast and wreaked havoc on the lives of millions of people and, most notably, the City of New Orleans. With $125 billion in damages, the storm was the costliest natural disaster in U.S. history.

At the time, Palms Springs residents Raymond Manci and Kevin Tabor lived in the city in an 1860s Greek Revival-style home in the Garden District, four blocks from the well-known Commander’s Palace restaurant. While their home sustained only minimal damage—the electric meter had been pulled off the side of the house when a century-old oak fell in their front yard — the experience left a mark on their lives. EXTERIOR: Raymond Manci and Kevin Tabor’s house was designed by William Krisel and was the model home for the first phase of Vista Las Palmas.

Tabor was working as a programmer for Capital One and the company temporarily relocated all of their New Orleans employees and their families to Dallas. Manci, a real estate developer, owned a 10-unit apartment building that sustained serious roof and rain damage and would take a year to repair.

“The experience during the period after Katrina was surreal,” says Manci. “Refrigerators littered the roads with sides painted ‘Send to President George Bush, 1600 Pennsylvania Ave, Washington, D.C.’ There was no Internet, cable, or satellite TV for months. I actually had to go out and purchase rabbit ears. Landline telephone service worked continuously, but cell service worked only for texting. And the U.S. mail service was unbelievable. You would receive the mail in small bundles that were a month or more old. City services were also non-existent and we didn’t have trash pickup for weeks.” DINING ROOM: The glass and chrome table in the dining room is from William Sonoma Home, the chairs are by West Elm, and the black Murano chandelier is from Design Within Reach. The painting is by Ivan Jensen and the mobile is by local artist “Zig" of Regal Plastics in Cathedral City.

For a number of years, the couple had spent several days to a week each January in Palm Springs and had always planned to buy a second home here and ultimately retire. “Our plans were moved up after the hurricane,” says Manci. “Kevin's job offered him the opportunity to move wherever he wanted and I was ready for a transition in my life.”

They relocated here in 2006 and renovated an Alexander home in Vista Las Palmas. But they couldn't keep their eyes off another Alexander home in their neighborhood that was designed by William Krisel, and jumped at the chance to purchase it in 2010. “What made us interested in the house was the curb appeal,” says Manci. “The house had served as the model home for the first phase of Vista Las Palmas. The home’s curb appeal stops many tourists and midcentury modern enthusiasts on a daily basis.”

The 2,131-square-foot home was built in 1957 with four bedrooms and three bathrooms, and it retains most of its original midcentury charms. “We were honored to have Bill Krisel come through the house on an Alexander Home Tour a few years ago,” says Manci. “He noted that the footprint of the house had not been changed and he remembered the building of the home. He said that there was a rock planter to the left of the front door that mimicked the stone covering on the carport and he appreciated that the carport had never been enclosed. He told us he disliked that owners had changed his original design by turning the carports into closed garages.” LIVING ROOM: “The living room is our family room so the wallpaper is actually a geometric pattern called TV Set,” says Manci. “The color scheme is black and white which is an homage to black-and-white television. Touches of pink include the Lucite handles on the credenza made by a local craftsman. A photograph of the singer Pink in a pink frame is tongue-in-cheek. Some people get it, some don't. The design is a mixture of styles from the 60s and 70s — Midcentury Modern and Hollywood Regency in a tug-o-war." The couple collaborated with designer Jay Jones on an interior that’s centered around patterns with bold colors. “We met Jay at a party at Leisureland, then home of local philanthropist Jamie Kabler,” says Manci. “We instantly hit it off because of his quirky sense of humor and his take on midcentury design. Our home borrows from 60s and 70s style brought into the 21st century. Hot pink, and blues and greens are used to evoke the nostalgia of the past. Crediting Jay's major influence—Barbie—he mixes whimsy and the eclectic styles of midcentury and Hollywood Regency.”

“This is the first house we have ever lived in that truly feels like home,” adds Manci. Architect William Krisel, with homeowners Kevin Tabor (left) and Raymond Manci (center), when he visited their house during an Alexander Home Tour. “This area serves as our entertaining space for cocktail parties and dinners in the cooler months. We love to set up a candlelit table and dine under the stars. Our events always pay homage to Kevin's heritage as a Louisiana Cajun with local Louisiana favorites like gumbo, jambalaya, and etouffee.”