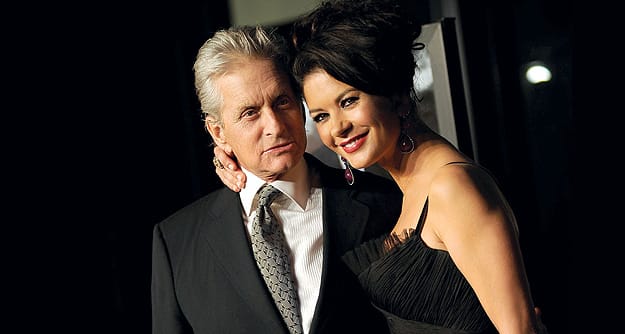 In practically the same breath as the gossip website theblemish.com reported about Justin Bieber teasing NFL icon Tom Brady about his hair in October, it also dispelled a Star tabloid report that Michael Douglas — star of the box office hit “Wall Street: Money Never Sleeps” — was on his deathbed fine-tuning his last wishes.

To be sure, Palm Springs Life caught up with the Oscar-winning actor several weeks into his recovery following eight weeks of chemotherapy and radiation — the standard treatment for his Stage IV throat cancer. From his home in New York, Douglas sounded spirited and grateful that he hadn’t seen the Star story. “I’m holding up as well as you can expect,” he says. “It’s an intense treatment. When I heard I had this particular kind of cancer, I didn’t deal with it on a mortality level. It’s very hard to have any perspective when you’re in the middle of it.”

Douglas, 66, is spending the recovery time with his wife, Catherine Zeta-Jones, and their children: Dylan, 10, and Carys, 7. He was refreshingly unguarded speaking about how he and his family cope with his condition. “The kids are doing great,” he says. “I told them early on all about it, and they came down to the hospital and saw a radiology session — the mask on your face, all the sci-fi kind of stuff. That’s taken some of the fear out. I’ve been so proud of them.”

Doctors offer an encouraging prognosis, and Douglas echoes, “All odds are very, very good.” However, he intones, “If it came to surgery, that’s another issue. If you’re clean, you’re clean; if you’re not, you’re not.

“I’m taking it one day at a time,” he continues. “I’m in the middle of a battle. It’s hard to explain [the recovery] unless you’ve experienced it. There are not a whole lot of options. You’re kicking back and recovering. It’s been a real eye-opener for me.”

However, his condition hardly dampens his pride in the tremendous reception of Oliver Stone’s “Wall Street” sequel. In the original 1987 crime drama, Douglas created a Wall Street archetype as the slick, ruthless financier Gordon Gekko. His white-collar shirt and suspenders gave way to power suits and a new Wall Street aesthetic. Set in 2008, the sequel finds Gekko out of prison (he was incarcerated 10 years for money laundering and stock market manipulation). He reconnects with his estranged daughter’s “money-man” fiancé Jake Moore (Shia LeBeouf) and regains his trust before falling into his crooked ways. This time, a fragile global economy factors into the narrative.

It’s almost impossible to watch the film without thoughts of Bernie Madoff popping into your mind. This challenged Oliver Stone and the cast. “[Madoff] was a relatively small part of the 07/08 financial crisis,” Douglas says, but when you see the film, “you have that history. The challenge was how to pull this off and look sophisticated when people have a strong image of the first picture. Oliver Stone and the whole production team were great. So was everybody in the cast. When I looked at [the sequel] again, I was really proud of it — happy it was received as well as it was here and in foreign countries.”

“Everything looks good,” he says, dismissing any report suggesting he’d never act again and looking forward to his next project: portraying the flamboyant musical performer Liberace, who, like Douglas, had a deep relationship with Palm Springs. Douglas’ father, Kirk Douglas, lived in Palm Springs for 40 years, his house on Via Lola long a stop for celebrity home tours. “My brother, Joel Douglas, lives in Palm Springs with his wife, JoAnne, and I’m down there to visit them from time to time,” Douglas says.

Actress Diana Dill, who divorced Kirk Douglas when Michael was 6 years old and then remarried, raised the Douglas boys in New York. “There was my whole childhood visiting [Palm Springs and Los Angeles] and going out during the holidays,” he says. “I’ve watched that place grow and grow.”

Kirk Douglas put his career first and was riddled with guilt that he was separated from his children. Michael Douglas, on the other hand, appears happy to let his wife contribute to the family fortune while he revels in a relationship with their two youngsters. His 31-year-old son from his first marriage is serving time for dealing drugs, but Dylan and Carys visit him.

Douglas enjoys being a dad — getting his kids ready for school, meeting their friends, and being an important part of their lives. “My itinerary is not that busy right now, so I’m cherishing this time,” he says, adding that, after shooting the Liberace film, he’d like to travel the world for a year with his kids.

Surely, he’ll have to regain some of the weight he has lost during his illness and recovery. “I am very blessed to have a family who couldn’t be more supportive,” he says. “I consider myself a cancer survivor. My love goes to all of those and all their families who are frustrated with this disease. Now, I can look those people in the eye with a lot more compassion, knowing what they have to go through.”