'I Do' Addresses Gay Marriage Issue in Film 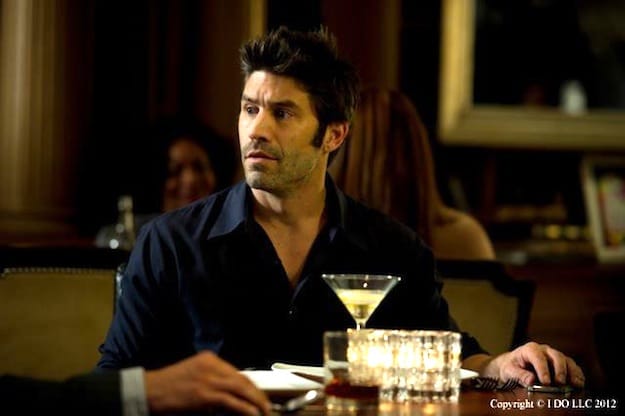 In one of the final scenes in the movie, I Do, David W. Ross, who wrote the screenplay and plays the main character, Jack Edwards, pulls up in a car to what is supposed to be a wine field in Spain to reunite with his lover, Mano Alfaro, played by Maurice Compte.

“It was actually shot in Temecula,” said director Glenn Gaylord during a Q&A session following a screening of the film June 2 at Cinémas Palme D’Or in Palm Desert, which runs through June 6.

But the rest of the movie tells a very compelling story of Jack, a gay photographer who is in the U.S. on a visa that will not be renewed. He is told the only option he has to stay in the country is to get married.

So he asks his best friend, Alison, a lesbian played by Jamie-Lynn Sigler (who you will recognize from The Sopranos fame) and she agrees.

If that doesn’t make for a complication in one’s life, Jack has two more forces pulling him in different directions. The accidental death of his brother leaves him wanting to help his sister-in-law to care for his niece, Tara. But then he meets Mano, and falls in love.

Since the movie first premiered last year, the timing couldn't have been better with gay marriage and California's Proposition 8 amendment being weighed by the U.S. Supreme Court. "I wanted to get the film out before the (2012) elections," Ross said. "It's just blind luck how the timing has worked out, plus some bubble gum and sticky tape."

The movie played in Palm Springs earlier this year at the International Film Festival in January, winning “Best of Fest”, and has collected additional awards at Gay & Lesbian Film Festivals in Miami, Long Beach, Atlanta, Seattle and Pittsburgh.

David, was it important for you to play the role of Jack, or would you have been OK having someone else do it?

“I wanted to play the role from the beginning. I remember taking Stephen to see Quinceañera (where Ross played Gary) and asked him if I could play Jack? It was tough separating myself at times from being an actor or writer when I had to write the scene of my brother dying. I think I’m both an actor and writer.”

The script was originally written as a comedy, and then turned more dramatic. What was the cause for that transition?

David: “I originally wrote it as a green card comedy. But over the years, I actually shot photography. In fact, I was the official photographer for the Proposition 8 rallies (a California constitutional amendment which defined marriage as between a man and woman). I would see the gay families with children. A friend called me from a rally and I couldn’t stop crying. This issue affects children as much as Mom and Dad. This is everyone’s issue. DOMA (Defense of Marriage Act) has been my guiding light.”

How would the movie play in Red states?

Glenn: “I think the American public is fair. The focus has been too much on the marriage issue. This is really about human rights. We made the film to change minds.”

David: “The tide is changing. A lot of young kids don’t see it as an issue of gay versus straight.”

What’s it’s like to be an openly gay actor trying to get work?

David: “After I was in Quinceañera, I was reluctant to go after another gay role. So I put that part of my career on hold to write I Do. My opinion changed during that time. If I have to be the gay Woody Allen and write and start in my own movies to get them done, that’s OK. If I have to do gay films, that’s OK, too.”

What’s next for the three of you?

David: “I’m hoping to tell someone else’s story. I have a short film I’m working on, and I want to do a relevant gay political drama.”

Glenn: “I’m working on a short film at present, and I have another short film and an action film in the works.”

Stephen: “I’m working on the ‘The Secret Life of Dorks’ (scheduled for release in late September), and working on ‘G.B.F.’, which stands for gay best friend. It’s like ‘Mean Girls’ only gayer. I’m also working on ‘Extracurricular Activities’, which is due to finish in September.”

I Do plays through June 6 at Cinémas Palme D’Or in Palm Desert. For more information on the movie, visit the I Do website. You can also download the movie from iTunes.