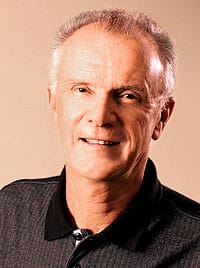 A sign on Raymond Moore’s office door reads, “The Hippie,” and foreshadows what lies beyond the entry. “That’s a Lennon,” Moore says, gesturing toward John Lennon’s self-portrait. “It’s signed. I went to a John Lennon exhibition and bought four autographed pieces. I have the other three up in my house.”

Deeper in the office is a signed and framed photo of heavy metal band Metallica. “It’s from Lars Ulrich, the band’s leader. It says, ‘Hi Amanda [Moore’s oldest daughter], you know your dad is indirectly responsible for all of this, right?’” Moore says. “[Ulrich] gave it to her when Metallica was performing with Guns ’n’ Roses.”

Moore, president of PM Sports Management, is something of a rebel in his digs at the $75 million Indian Wells Tennis Garden, host of this month’s Pacific Life Open. (His younger daughter, Kayla, wrote the “hippie” sign, and Lars is the son of Moore’s friend and former tennis pro Torben Ulrich of Denmark.)

Moore and Ulrich played and traveled together and were “heavily into music and other spiritual stuff,” Moore says. “Years ago, I was at Torben’s house in Copenhagen and I bought tickets for a Deep Purple concert. Torbin didn’t like heavy metal. ‘But why don’t you take my son?’ he asked.

So, Moore took Lars to his first concert, which left an enduring impression: Lars would later form Metallica.

In 1969, when South Africa-born Moore was ranked No. 8 in the world, he turned to Zen and meditation. “Torben introduced me to all of these things and to the teachings of spiritual leader Krishnamurti,” Moore says. “I even heard Krishnamurti talk in the mountains of Switzerland.”

Moore was the No. 1 South African player for many years, leading the nation to the Davis Cup title in 1974. His quick and aggressive game helped him overcome Rod Laver, Arthur Ashe, Bjorn Borg, and others.

Thirty years ago, Moore played in the doubles championship at the inaugural American Airlines Tennis Games in Palm Springs (now Pacific Life Open) — and then purchased a home in the desert.

Charlie Pasarell, Moore’s partner in PM Sports Management, encouraged him to move to the valley. “I was living in London, and my first wife preferred it here because of the sunshine,” Moore says. “We bought a small house for $58,000 in Sunrise Country Club in Rancho Mirage.”

Moore retired from the tour in the early 1980s and coached the Swiss Davis Cup team for two years before becoming national coach for South Africa. He later helped establish the Association of Tennis Professionals and served as president from 1983 to 1985. Moore influenced the ATP’s computer-ranking system before becoming chairman of the Men’s Tennis Council.

“I’m at a comfortable stage in life,” Moore says. “I have a great family. Susan, my wife, takes care of our 11-year-old daughter, Kayla, while I work. Amanda is a clinical psychologist. She’s on a mission to save young people from addiction and alcohol. As for me, I do not meditate anymore, but I am tilting back toward it, because it gave me so much. And that’s Zen — to always accept things the way they are and not see them how you want them to be.”