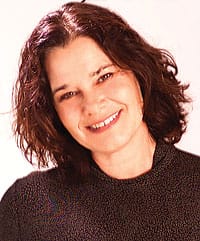 It seemed natural that Susan Salk studied pre-med when she enrolled at University of California San Diego. Her parents were veterinarians who taught and conducted research in addition to their clinical practice. And her uncle was Jonas Salk, developer of the polio vaccine.

But with the last name Salk, medicine can be quite intimidating. So, “I took a dance class and, after that, had a hard time focusing on my medical studies,” she says. “I also felt overwhelmed by the other Dr. Salks in the world. I decided that medicine wasn’t my place in which to be great.”

Instead, this Salk danced.

For more than 10 years, she studied dance performance and choreography with master teacher Bella Lewitzky. At UCLA, Salk broadened her education to include theater production. She spent 10 years in Los Angeles performing with two modern dance companies and worked part time as an arts administrator. She also taught movement to incarcerated youth through the California Arts Council’s Artists-in-the-Schools Program.

However, her deep-rooted ties to the healing arts continued to exert a pull. Throughout her dance career, Salk had intuitively “worked on” people, giving therapeutic massages to dance colleagues, friends, and family (in fact, her father always told her she had “smart hands” and should be a surgeon or physical therapist). “My uncle Jonas considered massage to be the physical labor of medicine,” she recalls. “He firmly believed in facilitated healing.”

Her movement training gave her a deep understanding of the body and how it works.

Salk eventually shifted direction and began formal training in therapeutic bodywork. Certified in craniosacral therapy, deep-tissue massage, Watsu, Reiki, and myofacial release, she worked as a massage therapist at Two Bunch Palms Resort & Spa in Desert Hot Springs. Then, in 1994, she met Pilates master teacher Ron Fletcher, one of a handful of remaining first-generation students of Joseph and Clara Pilates, founders of the Pilates method of physical and mental conditioning in the 1930s.

“As a dancer, I had studied the Pilates method and found it tremendously helpful for my own well-being,” she says. “By the time I took Ron’s class, it all came together.”

Salk’s study with Fletcher ignited a passion for teaching, and she eventually earned the designation of senior teacher of the Ron Fletcher Work. “I realized I was tired of being silent all day,” she says. “Doing hands-on bodywork, you live in an intuitive, silent world. I realized I had a lot to say, to teach.”

By 2000, this realization led her to open Palm Springs Pilates Studio, where she and a team of teachers offer private and group Pilates classes. “I love watching people come alive,” she says. “Pilates is more than just a workout; it establishes a dialog between you and your body. It changes the way you move through life.

“It’s been said that after 10 Pilates classes you feel different, and after 20 classes you look different,” she adds. “But after 30 classes, you are different.”