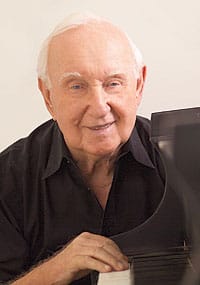 The violin teases like a movie soundtrack — a tense, curious statement that leads to an ominous but mercurial dialogue with the accompanying cello and piano that insist you avoid complacency. A film buff might quickly think Eyes Wide Shut or The Shining. However, Benjamin Lees’ Piano Trio No. 2, or Silent Voices, has a deeper, longer-lasting purpose: to ensure listeners remember those whose voices were forever stilled by pogroms and genocides of the Holocaust.

“When I was writing the piece, it occurred to me that these were people in bunks who ended up in the gas chambers — living, breathing people with families and voices. Now those voices are silent. That’s when I decided it would be called Silent Voices,” Lees says from his Palm Springs home. “From that point on, writing was like trying to control an object. It became a very emotional piece.”

Commissioned by the U.S. Holocaust Memorial Museum in Washington, D.C., and premiered in 1998, the single-movement composition delivers an indelible narrative with intense drama — reaching strings and rumbling keys that punctuate the experience, the grief, and the enduring aftermath. The 14-minute piece dies quietly, with a graceful dignity that bespeaks its composer. “After you listen to it, you’re drained,” Lees says.

If you’re in the audience, you question whether to applaud when the piece trails into silence. You don’t want to break the powerful spell. After a performance in Pennsylvania — where “a strange applause” followed — the audience was asked if they’d like to hear it again with no applause. “The effect was so overwhelming,” says Lees, whose Symphony No. 5 was nominated for a 2004 Grammy Award for best contemporary composition.

When the Arman Trio — the group that premiered Silent Voices in New York in 2000 — performs the piece June 24 at Wigmore Hall in London, the audience might be asked to withhold its applause. It befits the intimate nature of this chamber ensemble, connecting the musicians and the audience in nontraditional fashion. “I am not quite certain yet if I will ask the London audience to withhold its applause,” Lees says. “Perhaps I will rely on the powerful ending to make the decision for the listeners.”

Lees, 81, started piano lessons at age 5 and composing music at 15. In 1954, the NBC Orchestra performed his work on a national broadcast. With Guggenheim and Fulbright fellowships on his resume, he spent the 1960s and ’70s teaching at Peabody Conservatory of Music, Manhattan School of Music, and Julliard School of Music.  He recently composed String Quartet No. 6, a commission from the Cypress String Quartet of San Francisco that will  premiere in December.