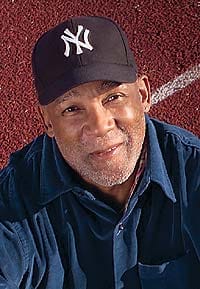 Walking with John Carlos is like keeping pace with a racehorse. His tall, athletic frame constantly moves — shoulders pivoting, legs churning, head bobbing. But when he stops to level his eyes on you, to make a point, to tell an old story, or, in this case, to admonish a student who has been seen in his in-school suspension office at Palm Springs High School one too many times, the world comes to a screeching halt.

“Did you hear her?” he asks, regarding the student. “The teacher got her in trouble.” Carlos erupts with a hearty laugh and it’s then that you notice that despite the various hurdles the 58-year old has had to clear, the years have ultimately been a friend to him. His face is easy, his voice alive, his message just as clear. “If I can help one kid get better, just one, I’m doing my job.”

Best known (along with fellow sprinter Tommie Smith) for raising a gloved fist in recognition of Black Power during medal ceremonies at the 1968 Olympics in Mexico City, Carlos was thrust from the relative anonymity of track and field into the cultural DNA of a generation, his bowed-head visage becoming the symbol of a civil rights movement still slogging through the morass of time. It was an unlikely fame for Carlos and one that ultimately dealt him a blow when he returned home.

“It’s very difficult when you’ve been raised all your life to do a job, to be the bread winner, to be a good husband and father, all of which I did prior to 1968,” Carlos says. “I took great pride in that. After Mexico, overnight, the roof fell in. No job. Lack of association with people you thought were your friends. All of a sudden, I couldn’t provide for my wife and kids. But I wasn’t too proud. I took menial jobs, anything to support my family.”

What it always came back to, Carlos says, was working with children and making sure children, especially his own, were able to achieve the things for which he risked his very career — a decision that ultimately led to him settling in Palm Springs in 1987. “We were living in Los Angeles and the gang situation was awful,” he says. “I wanted my daughters to get a chance to learn in a safe environment.” En route to Georgia, where Carlos and his wife had decided to settle, the family stopped in Palm Springs for the night. Seventeen years later, they’re still here. Since 1988, Carlos has worked at Palm Springs High School in a number of capacities and is currently track and field coach and in-school suspension supervisor, a role befitting a man whose life has been touched by both despair and greatness.

But it’s the greatness that drives Carlos. Last year — 35 years since Mexico City — Carlos was finally elected to the Track & Field Hall of Fame, an overdue recognition long fraught with politics for a man once known as the “world’s fastest human.”