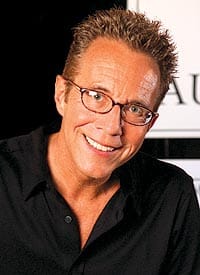 I’m a vampire,” Thom Racina says. The author of seven thrillers prefers the quiet and solitude of the wee hours for writing. He goes to bed after the sun comes up. But, unlike a true vampire, he gets up at noon and goes out among the crowds.

Racina loves crowds: He chats with strangers at more than 100 book signings a year, including weekly appearances at Palm Springs VillageFest, where he sells as many as 100 books in an evening. As impressive as that sounds, consider this is the man who walked into a Costco store in San Francisco for bread and tequila and signed 30 books in 10 minutes when he saw his book displayed.

Then there was O’Hare Airport in Chicago, where he saw his books lining three shelves in a concourse shop. “I was on top,” he says. “Mr. [John] Grisham was down near the bottom, and I had never seen that. I said, ‘Where’s the manager? Where’s the manager?’” When the manager identified himself, Racina said, “Can I kiss your feet?” As they talked, a crowd gathered and the author ended up signing 30 books. “I almost missed my plane!”

Many people who attend Racina’s book signings are attracted by his past — as a soap opera writer (General Hospital, Days of Our Lives, Another World, and others). Tired of the Los Angeles scene, he became a novelist and moved to Palm Springs six years ago. He calls his 2001 book, The Madman’s Diary, a “love letter” to his new home. It’s filled with references to local places and people, though the idea came from his brother, Bob, who lives in their hometown of Kenosha, Wis.

Years ago, Bob Racina wrote a screenplay in which the climax occurred at Palm Springs Aerial Tramway. “I wanted to set a book in Palm Springs,” Thom Racina says. “I wanted to make it a real thriller, and it fit perfectly to use my brother’s idea.”

Racina concedes a few inaccuracies. For example, the book puts the Hyatt Grand Champions resort in Palm Desert, not Indian Wells. “These things happen,” he says unapologetically, though he adds, “I wish I could go over it now and make a few little changes.” One “error” he consciously made was making the Tennis Club area visible from the top of the Tram. In any event, he deserves credit for some foresight: “God, what this town needs is a good Krispy Kreme store,” says one of the book’s characters.

Racina recently completed Ice Storm L.A. The book was scheduled for February, but the publisher has postponed release until June 2005 “because it’s a perfect summer read,” Racina says. Meanwhile, he’s writing The Puzzle Box — “more of an epic thriller.” It starts in the Pacific Northwest and goes everywhere, including China, he says. But when asked if “everywhere” includes the desert, he says no, then reconsiders. “I was going to New Mexico. It might be fun to do that    section in Palm Springs.”

Racina wanted the cover of The Madman’s Diary to feature palm trees, but the publisher refused, saying “this is a mass-market paperback for the country and Canada, not just for your desert.”

Still, he says, many tourists who buy his book at VillageFest “really love it because it’s a souvenir of a place they’ve been.”