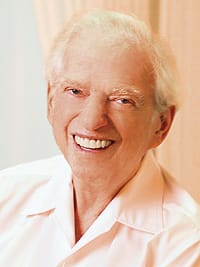 “Detective Earl Greenburg was a professional, capable-looking man with an impressive record. Detective Robert Praegitzer was gray-haired and grizzled, with the laid-back manner of someone who had seen it all before.”

Best-selling author Sidney Sheldon wrote those words about two Palm Springs Valley residents. Neither, however, is in fact a detective. Sheldon assigned their names to characters in his latest novel, Are You Afraid of the Dark? (William Morrow), released in September, after they bid for the privilege in a charity auction.

Sheldon, who has 17 earlier book titles to his credit, believes in supporting worthy causes and has offered to name fictional characters to high bidders at fundraisers for American Cancer Society, Rick Weiss Foundation, and Bighorn Institute. The latter nonprofit is particularly near and dear to his heart, because his wife, Alexandra, serves as president of its board. Sheldon auctioned four names to help the endangered bighorn sheep.

The good deed netted the three organizations $30,000. “It’s a great way to raise money,” Sheldon says, adding that he had already begun his 18th book when the auctions occurred and plans to do it again. “I wrote the book and put in whatever name I wanted to use. Then I changed those names and inserted the [bid winners’] names,” he says. “The people who made the most contribution, I tried to make them more important characters.”

In addition to the two detectives mentioned above, the characters include a senator and her assistant, a librarian, and an investor in the world’s largest think tank. Though everyone wants to be the consummate villain, he says, he reserved naming rights to that character.

“None were the murderer,” Sheldon says. “I already had a name I liked.”

Because his books are sold in 51 languages in 180 countries (Guinness declares him the most-translated author in the world), “Their names will be famous in many countries,” he says.

As you read Are You Afraid of the Dark?, pay particular attention to these characters: Earl Greenburg, Robert Praegitzer, Pauline van Luven, Corinne Murphy, John Higholt, and Lisa Marie Houston. Who knows? If Sheldon’s new book is made into a movie — as many of his previous books have been — these monikers could end up tied to the likes of Roger Moore, Omar Shariff, or Susan Sarandon, all of whom have starred in films based on Sheldon’s books.