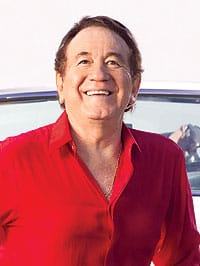 In 1963, Trini Lopez’s first hit song, “If I Had a Hammer,” sold 5 million copies and reached No. 1 on the charts in 25 countries. In 40 years since then, the longtime Palm Springs resident — who pioneered the fusion of country, folk, Latin, and rock music — has amassed a long list of accolades and tales.

More impressive than his induction to the International Latin Music Hall of Fame was having a custom-designed Gibson guitar named after him.

“My father bought me my first guitar for $12,” says Dallas-born Lopez, whose first name is short for Trinidad. “He really could not afford it, but he wanted to keep me away from the street gangs. My father taught me how to play guitar, and it changed my life forever.”

It was the same year Lopez first visited Palm Springs. “I bought a house in 1966 and moved here full time in 1981,” he says, noting that he needed little time to become part of the town’s social fabric. “Once, at a celebrity tennis tournament at The Riviera [Resort and Racquet Club], I beat Sonny Bono on the center court,” Lopez recalls. “But he invited me to Sophia Loren’s party at his house. And Sonny wanted to sing with me. So, he sang ‘If I Had a Hammer’ with me in back of his house. I always remember that when I think of Sonny.”

Lopez still lives in the Palm Springs neighborhood where Elvis Presley once called home. “Elvis lived not far from my house,” he says. “He honeymooned here with Priscilla. He was really nice, really down to earth, just like my other late music friend, Buddy Holly. Every time we got together, Elvis always talked to me about only one thing: religion. Can you believe that?”

A tear wells in Lopez’s eye when he mentions Holly, a friend during his early years in Texas.

He recounts the story of “La Bamba,” his most famous song: “It’s a wedding song that originated from Vera Cruz in Mexico. It was written in the 1920s by an unknown author, so it is [in the] public domain. I sang that song two years before Ritchie Valens recorded it. After Buddy Holly’s and Valens’ tragic plane crash, I came to Hollywood, hooked up with Sinatra, and recorded the song. It became such an international success for me. And, so, when the movie La Bamba came out, everyone thought that it was a story about me. I changed the song a lot and rearranged it so that, in the end, I have received the rights and the credit for ‘La Bamba.’”

Lopez, who also appeared in several television shows and movies (including The Dirty Dozen), wrote his new album, You Are Like a Great Day in May, from his tranquil Palm Springs home. “I haven’t written in a long time,” he says. “The [title] song is about a girl. There is also ‘Trini’s Tune’ — a happy song with a happy beat. And there are some love songs, too. And I did not write many love songs in my life. This new album is a combo of everything. You have to hear it.”