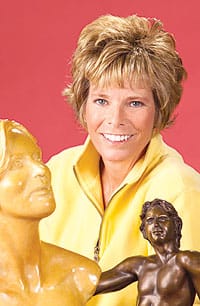 Dorry Wynham has always been passionate about art — despite her early teachers discouraging her from pursuing that passion. Fortunately, when she was in her late teens, a spiritual teacher told her that if she had a desire, God would give her the ability. “I felt so empowered,” Wynham says. “It seemed like such a deep truth, and I knew it was my path.”

It was a path of discovery, personal growth, and self-expression that has informed her work and her life.

Wynham enrolled at Portland State University intending to study art. Then FATE intervened. “I met a teacher with an art studio in Los Angeles,” she says. “He was bringing together a group of artists to create a cultural museum funded by Alfred Ford [greatgrandson of Henry Ford].” This museum housed the First American Transcendental Exhibition (FATE), a multimedia presentation of Bhagavad Gita, India’s literary classic.

“My real training began there,” says Wynham, who now lives in La Quinta. She and her fellow artists traveled to India and studied putal (the art of doll-making), an ancient clay-working method, and sculpture. On their return, the artists applied the antique craft along with electronics to create 11 dioramas that make up the exhibition. Wynham sculpted most of the figures in the dioramas and painted almost all of them.

“This was the late 1970s, and the exhibit attracted a lot of celebrities,” she recalls. Among them was the late George Harrison, who commissioned a sculpture for his private collection. Alfred Ford also commissioned two pieces from Wynham.

Next, her path took her to Italy, where she absorbed masters’ works and taught art to children. “My studying was self-directed,” she says. “I went where my heart and spirit took me and where projects presented themselves.” She also pursued her spiritual studies, eventually becoming an Initiated Brahmin, which means that she follows the Bhakti (devotional) yoga tradition. “I follow certain principles in life,” she says, which includes not being attached to things.

It’s ironic, perhaps, given that more and more people are acquiring her art, which ranges from hand-painted clothing and accessories to sculpture and paintings. Her talent for sculpting faces earns a growing number of commissioned sculptural portraits, which she executes in bronze using the ancient lost-wax process.

“I’m taking the Eastern way of sculpting and integrating it with a Western contemporary look, using bronze and the array of patinas available today,” she says. Wynham credits her spiritual teachings with her ability to connect with her subjects and capture their essence in these three-dimensional portraits.

“I don’t begin any piece without doing one to several meditations, to let my heart and spirit guide me to be open to what the piece should look like,” she says. “I ask, ‘Please give me the ability to create not just a piece of art, but one that can touch people’s hearts and souls.’”