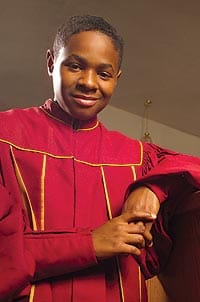 Prior to the casino’s first America Swings show in January, he was given an arrangement of “Proud Mary” that he’d never performed. Fortunately, Tina Turner is one of his favorite singers. Another favorite is gospel singer Donnie McLurkin, with whom he sang at Six Flags Magic Mountain. And it’s gospel that he enjoys singing the most.

Francis was 6 when he first performed for an audience; he sang “Shake the Devil Out” at a family reunion. Then he started singing at church.

“Years passed,” he says, as if he were much older, “and then I went to the park in La Quinta.” It was at La Quinta’s Mainstreet festival at Adams Park that talent agent Leslie McMillan heard Francis singing “Oh Happy Day” while strolling the grounds and realized he had a gift that needed to be nurtured. She’s currently negotiating with record labels that have expressed an interest in him.

Francis’ demo CD features pop/R&B/country sounds with songs like Lionel Richie’s “All Night Long,” Tina Turner’s “Proud Mary,” and Lee Greenwood’s “God Bless the U.S.A.” He also recorded two songs by local pianist and songwriter Tim Burleson. Although his next CD will be all gospel, he envisions a musical career that combines gospel and R&B.

Last year, Francis won an $800 scholarship from the High Desert Joint Association of Musicians and Songwriters that will allow him to pursue singing lessons. “Usually, I just practice in the bathroom,” he says.

Valencia Hammer and Calvin Francis are looking into home schooling for their son because he has had to miss so many classes at Palm Desert Middle School. In January, for example, he missed school to attend the prestigious Omni Awards for youth achievement in music and performing arts; he won the Best New Gospel Artist award at Skirball Cultural Center in Los Angeles.

Besides singing, Francis’ primary interest is ministering. He says he is in a training program “so when you go to college, you know how to be a pastor.” But when asked which career path he’s most interested in pursuing, he responds succinctly: “Gospel.”

A Kevin and Friends concert is scheduled for 7 p.m. on March 27 at Valerie Mahabir’s Ballet Academy and Performing Arts Center in Rancho Mirage.