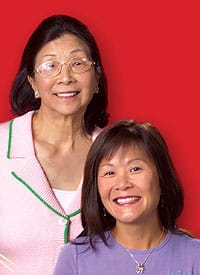 Having worked in the family market in Canton, China, since the age of 11, Leeann Chin brought to the United States a wealth of traditional Chinese recipes when she immigrated at the age of 23.

Today, Leeann and daughter Katie share the recipes on the PBS series Double Happiness, named for the centuries-old Chinese wish given on happy occasions.

“Every show starts with a family memory based on my mother’s childhood in China or my childhood growing up in Minnesota,” Katie says. For example, they talk about Leeann delivering 50 pounds of rice on her bicycle as a child before preparing a rice-based dish.

The mother-daughter-cooking relationship actually began when Katie — a worldwide promotions manager at Walt Disney Pictures and Twentieth Century Fox — asked her mother to help her entertain friends in her home.

By then, Leeann was seasoned in the culinary world. She had opened her first restaurant in Minnetonka, Minn., in 1980. Actor Sean Connery, whom she met while catering a party for the owner of the Minnesota Twins, was one of her early investors. Five years later, General Mills — which had published Betty Crocker’s Chinese Cookbook, Recipes by Leeann Chin — purchased the expanding Leeann Chin Chinese Cuisine chain. Three years later, Leeann reacquired the company, recruited a network of investors, and expanded to more than 45 locations in Minnesota and Wisconsin.

The “retired” entrepreneur moved to Palm Desert at the suggestion of a friend who once owned a store in the same Minnesota mall as Leeann’s first restaurant — Denise Robergé, who operates an art gallery, jewelry store, and restaurant on El Paseo. “Denise said, ‘Oh, I always wanted some Asian dishes [at Augusta Restaurant]. Why don’t you come here to do that?’” Leeann says.

On their cooking show, generations collide and harmonize. “We have modified the techniques,” Katie says. “It’s OK not to use a wok.” She says she represents the everyday viewer, whereas her mother is “all about the food.”

“I suggest certain shortcuts she thinks are taboo,” Katie says. “She’s kind of vocal about it.” Leeann says in those instances she can’t help but tell her daughter, “I know better. You should know that, too,” she says.

“There’s a healthy dose of mother-daughter conflict that comes out in the show,” Katie says, smiling.