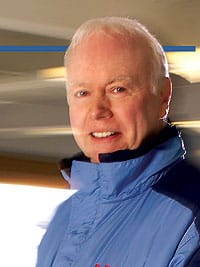 What’s an ice skating coach doing in a place like this?

Three-time national medalist; five-year Ice Follies star; coach of six world champions, four junior world champions, three Olympic medalists, and 20 world championship medalists; and the only figure skating coach named Olympic Coach of the Year (1997), Frank Carroll has lived in Palm Springs for 17 years. He considers it his first home, though he spends most weekdays in Marina Del Rey, where he keeps an apartment and coaches skaters at Health South Training Center in El Segundo.

“I am here absolutely every single moment I can be here,” he says. “In my whole career of 40 years or more, people have always asked me, ‘What’s your favorite place you have been? Paris? Moscow?’ I honestly tell them Palm Springs is my favorite place in the whole world.”

Carroll discovered his paradise after leaving the Ice Follies in the 1960s and “doing some terrible, terrible movies as an extra” in Hollywood.

“I met a lot of people in that industry.  They came to Palm Springs and had homes [here], so I got invited down to visit,” he says. Now a homeowner, he wants to see a full-size ice rink built so that he could train skaters here full time. He has offered promotional support to the Ice Garden in Cathedral City.

“God bless the people who put their money into it,” he says. “At least there is a little piece of ice for the kids and the public. There is a huge, huge need for a full-size ice rink.”

Carroll has coached Olympic medalists Linda Fratianne (his favorite student for her combination of talent, discipline, and dedication), Christopher Bowman (“by far the most talented”), and Michelle Kwan (who “had the best awareness of her body”). His biggest moment came when Tim Goebel won the bronze in the 2002 Olympics, “because I think maybe winning a medal was unexpected, and he did such a great job it was exciting for me.”

“She put the triple jump on the map for girls,” Carroll says. “She did them with such ease — as well, if not better, than today’s skaters.”

With Kwan, whom he coached for 10 years at Lake Arrowhead, he reintroduced moves that had not been seen for years.

“Michelle did a Charlotte, which had not been done since the ’30s,” he says, describing it as a spiral split with the head on the lower foot. Another long-absent move was the split falling jump, which involves an unusual takeoff from the back outside edge with no “tap.”

“[Skating] immediately appealed to me, because it had all the aspects of what I was looking for in a sport: theatricality, musicality, and tremendous athleticism,” Carroll says. Today he coaches 12 students full time, including world bronze medalist Evan Lysacek and U.S. bronze medalist Jennifer Kirk, as well as skaters who have primary coaches and who come from as far away as Korea, Japan, Finland, and Denmark.