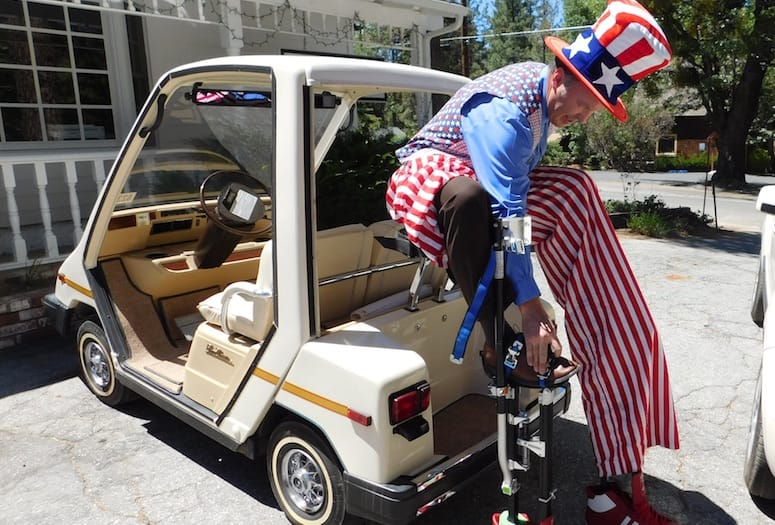 Outside his chiropractic practice in Idyllwild, Charles “Chip” Shelley gears up for Idyllwild's Fourth of July parade.
PHOTOGRAPH BY MARCIA GAWECKI

A chiropractor straps on 24-inch leg stilts, a star-studded vest, and a stovepipe hat to become an 8-foot tall Uncle Sam in the 52nd annual Fourth of July Parade in Idyllwild. He’s one of 100 parade attractions that include a bagpipe band, Jeep clubs, greyhound dogs, and Santa Claus on a fire truck.

“It’s the only place around where people can put out their lawn chairs on the parade route the night before and no one will bother or take them,” says Chuck Weisbart, who has been Rotary parade co-chairman for the past three years along with his wife, Susan. Weisbart lives in Idyllwild, but owns a business in Palm Desert.

Dr. Charles “Chip” Shelley has only been participating in the parade for two years, but he started walking on stilts long before that. Shelley was about 15 years old when he made his own walking stilts out of two-by-two plywood boards with triangles nailed to them.

• See related story: Fourth of July: Where to Go, What To Do

“They weren’t very good, and with those kinds of stilts, you have to keep moving all the time or you will lose your balance,” says Shelley, who attended Indio High School and College of the Desert.

He says his father piqued his interest in stilts when he told him that, as a boy in Ione, he walked all the way across town on stilts. “I thought that was so cool that I wanted to try it,” he says. “Now my son can practically dance on stilts. But he’s 20 years old and I’m over 50.”

For his Uncle Sam costume, Shelley’s wife created his red, white, and blue starred vest, and his mother made him a pair of oversize striped pants.

“I’ve always liked costumes because I grew up with them,” he explains. “My birthday is on Nov. 1, the day after Halloween, so we always had a birthday costume party.”

To get dressed, Shelley has to stand on a 3-foot ledge and strap on the stilts, which are commonly called “drywall stilts,” to his legs and shoes. They are made of titanium and are relatively lightweight and stable. He adds size 22 Kareem Abdul-Jabbar tennis shoes, and the whole ensemble weighs about 5 pounds each. 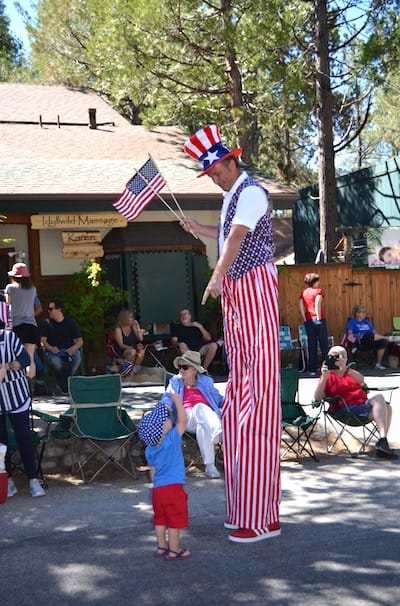 Small children marvel at his height at the parade.

Shelley doesn’t use a walking stick or any additional support for balance, but looks for uneven surfaces, of which there are many along the North Circle parade route. He has only fallen once — in a veterans parade in Yuma, where his parents live. He caught an edge of the asphalt and went down hard. “I scraped up my hand and knee, but finished the parade,” Shelley recalls.

Shelley walks the entire length of the two-hour-long parade in Idyllwild, waving to customers and anyone else he recognizes. However, he takes short breaks by leaning under shade trees along the route. He never takes the stilts off. “It’s a pretty good workout,” he adds.

Young children smile and marvel at his height and get particularly excited at the opportunity to take a photo with him. Teenagers, he says, always want to lift up his pant leg to see the drywall stilts underneath.

“But I don’t like to show them that because it’s part of the illusion,” he says. “Just like in the theater, you never want anyone to see what’s going on behind the scenes.

“Tall guys also like to take pictures with me because someone is finally taller than them,” he continues. Shelley stands 6 feet tall but reaches 8 feet with the stilts. “Then they crack all the tall jokes that have been told to them over the years.” 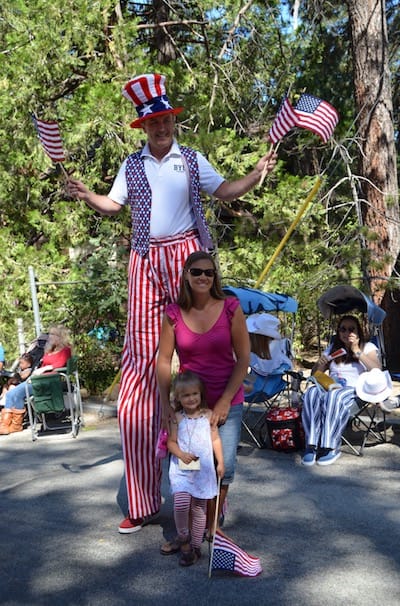 Charles Shelley has been walking in the Idyllwild Fourth of July parade for the last two years.