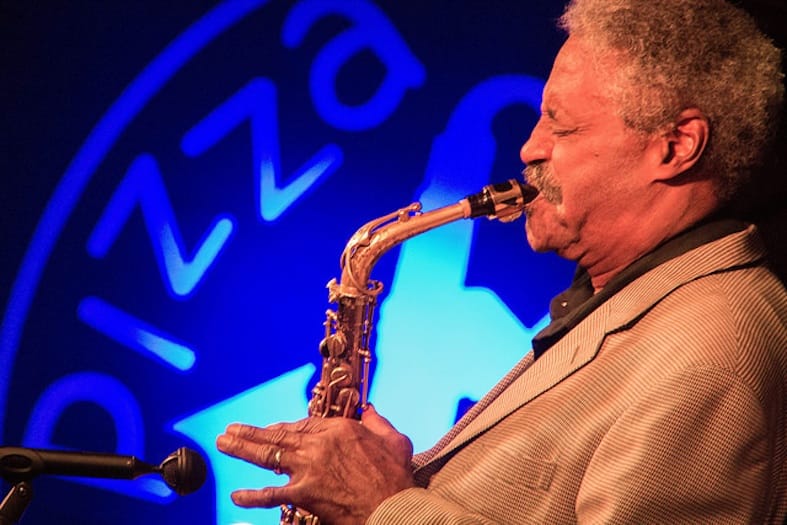 All roads lead back to Marshall Hawkins.

Which is to say all roads lead back to Jazz in the Pines in Idyllwild.

Without Hawkins, the celebrated jazz fest would not be marking its 22nd edition on Aug. 15-16 with a backdrop of the picturesque Idyllwild Arts Academy. photo courtesy of idyllwild jazz in the pines

Marshall Hawkins teamed up with Casey Abrams during last year's Jazz in the Pines.

Nor would some of the great jazz legends like Charles McPherson make yet another return trip to the mountaintop fest. “Marshall Hawkins is a wonderful bass player and is the engine for that festival, that’s how I got involved,” recalls McPherson.

Adds Hawkins, “For jazz music, Charles McPherson is the keeper of the flame.”

‪Hawkins, a legendary stand-up base jazz musician and founder of the Idyllwild Arts Academy Jazz Program, started the Jazz in the Pines annual festival 22 years ago and it has grown exponentially ever since.‬

McPherson, an alto sax virtuoso, will perform the second of the two-day festival, which encompasses nearly 30 acts from solo musicians, jazz ensembles, big bands, jazz orchestras, to brass bands performing in three different venues. “The lineup is quite diverse this year with a full range of jazz-influenced styles,” says John Newman, director of Business Operations for Idyllwild Arts Foundation.

One of the notable features of this jazz festival is the appearance of several Idyllwild Arts alums who are prominent musicians, many of Hawkins’ former students. Among them is American Idol finalist Casey Abrams, Lisa Halen, and Graham Dechter. American Idol finalist Haley Reinhart is also scheduled to appear. “The Graham Dechter Quartet has had a meteoric rise in the jazz world and we’re thrilled to be welcoming them,” Newman notes. From 1996, Charles McPherson plays live at Carnegie Hall with James Moody and others.

McPherson has appeared at Jazz in the Pines intermittently throughout the festival’s history while accumulating a career of recording, teaching, and touring throughout the U.S. and internationally. He has performed at Carnegie Hall and Lincoln Center numerous times, both as a soloist and part of a jazz ensemble. He has produced two recordings this year, his first since 2010. The recordings are a mix of original compositions and selections from the American songbook. McPherson also had the opportunity to be the featured saxophonist in Bird, the Clint Eastwood film about the late great saxophonist Charlie Parker.

McPherson was about to start a concert tour in Spain when Palm Springs Life caught up to him by phone from his home in San Diego.

You’re about to embark on a tour in Spain…do you often tour internationally?
“I go to Europe three or four times a year, New York at least twice, and Chicago once a year. At home in San Diego, I don’t work, I just teach private students. I’m away about three or four months out of the year, the balance is nice. I enjoy experiencing different cultures and different food. But I’m never gone more than seven days. This trip to Spain is basically 10 days, but some of that is traveling.

"Europe and Japan are very important to the jazz world — people are enamored of America and Americana and especially jazz. There’s a degree of novelty because it doesn’t come from their culture. But now you have hordes of Japanese and Europeans who play jazz because they teach it in their universities.” Charles McPherson says “everything that has happened since bebop is a little branch from that tree.”

How were you selected as the featured saxophone on Clint Eastwood’s film Bird in 1988?
“I got involved with him because Clint Eastwood is a real jazz fan. He used to play piano. He always finds a way to fit jazz into his film scores. Lenny Niehaus, Clint Eastwood’s musical director, knew who I was, and probably other players who were influenced by Charlie Parkers’ style. I did some of the tracks of the music that they didn’t have the tracks for. It was interesting technically because I had to play and read music to synchronize with action on the screen.”

How has jazz changed during your long career?
“There are changes aesthetically, in a sense it’s a lot less melodic. There are also many more genres and variations under the jazz definition. When musicians started mixing rock and jazz you got fusion, a musical hybrid. So now there’s a whole slew of musicians jazz, rock or fusion who are fusing elements; that started in the 1970s.”

You’re a renowned bebop jazz musician, how do you define bebop music?
“Bebop is music that came from people like Dizzy Gillespie, Thelonius Monk, and Charlie Parker — a certain hub of young musicians that were informed by the swing generation before them. It morphed into something more complicated rhythmically and harmonically. So bebop came about as the next jazz movement or innovation after swing and the big band era. It’s still around and everything that has happened since bebop is a little branch from that tree.”